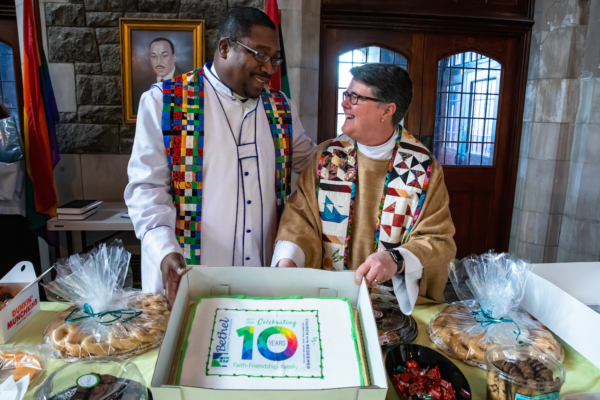 From left, the Rev. Sidney S. Williams Jr., senior pastor of Bethel AME Church of Morristown, New Jersey, and the Rev. Cynthia Black, rector of the Church of the Redeemer in Morristown, take part in the Jan. 19 celebration of their congregations’ growing relationship. Photo: W. H. Schleicher

[Episcopal News Service] When members of the Church of the Redeemer and Bethel AME Church, both in Morristown, New Jersey, are out on the lawn sharing dinner, the Rev. Cynthia Black thinks to herself, “This is what heaven is like.”

The relationship between Redeemer and Bethel began 10 years ago and is part of Redeemer’s 20-year-old annual Season of Reconciliation. The season goes from the Sunday before Martin Luther King Jr. Day in January to the Sunday nearest Feb. 13, the day The Episcopal Church celebrates the feast of Absalom Jones. The season’s end coincides with a special day for AME members as well.

“One of the things we learn and relearn every year is about our relationship with Absalom Jones and Richard Allen,” Black, Redeemer’s rector, told Episcopal News Service recently.

Allen remained a Methodist and in 1794 founded Bethel African Methodist Episcopal Church in Philadelphia. He later organized the AME Church, and the denomination celebrates Allen’s birthday, Feb. 14, as Founder’s Day.

The idea for Redeemer’s Season of Reconciliation began in the late 1990s when members of the church’s racial dialogue group challenged the congregational worship committee to think about how the church could address racism.

It wasn’t a totally new question. “We had always celebrated Martin Luther King Day as a liberation holiday,” said Colleen Hintz, who was a member of the worship committee at the time and later chaired the group for many years. The committee took up the challenge, she told ENS, building on Redeemer’s habit of changing the focus of many secular holidays, such celebrating rights for all women on Mother’s Day.

The worship committee decided to go further. “These single liberation days are as good as the day is, and it addresses the people who are there on that day, and then you forget about it,” Hintz said. Instead, the committee proposed setting aside a period of weeks “when we would be looking seriously at the issues of racism.”

She decided to make vestments and altar hangings for the season. “I knew right away what they looked like; they looked like the secret quilt code of the Underground Railroad,” she said.

Hintz, who has been creating vestments since 1980, was inspired by the somewhat controversial book “Hidden in Plain View,” which explains how enslaved men and women made quilts encoded with long-recognized symbols and used them to direct escapees to freedom.

“To me, hidden within that code are all the tools we need to dismantle isms in our lifetime if we only follow them,” she said. “And in my heart, I know Redeemer is a safe house; it’s a safe place.”

Hintz explains the meanings of the vestments’ symbols in this video:

If the Season of Reconciliation began with a focus on division between blacks and whites, Redeemer later expanded the season to consider other issues, according to Hintz, including issues like intolerance of immigrants and refugees and of other religions. “It is a time where we intentionally name the issues that divide us,” she said.

One of those issues came to the fore in November 2010 when the Rev. Sidney S. Williams Jr. was called from a missionary posting in Cape Town, South Africa, to be Bethel’s senior pastor. Early on, he spoke during a clergy gathering about his experience of the truth and reconciliation work practiced in South Africa. Williams explained to the group that the work is “such an appropriate way to overcome barriers and prejudices,” adding that Americans don’t practice reconciliation nearly enough. “We just want to change laws,” he said.

Williams told ENS that the Rev. Lisa Green, who was then Redeemer’s interim rector, challenged him to look beyond his focus on blacks and whites to consider LGBTQ issues. She invited Bethel to come worship with the Episcopalians.

Redeemer has long advocated for the full inclusion of LGBTQ people in their communities and in the life of the church. The AME denomination has not been as open to full inclusion as The Episcopal Church.

Williams said he assured his congregation that he was “not trying to change any laws or break away from the AME Church; we just want to go worship Christ together, and then they are going to come to do the same with us.”

In the end, Bethel decided to accept the invitation. That first year, the Episcopalians were led by Green, who is straight. Then, Black became Redeemer’s rector in June 2011. She recalled that Williams told her some Bethel members were worried how it would look if they worshipped at a church with a lesbian pastor. Williams said to them, “Pastor Cynthia and her wife have only been married once. Some of you have been divorced and remarried. They’ve been together for 30 years.” 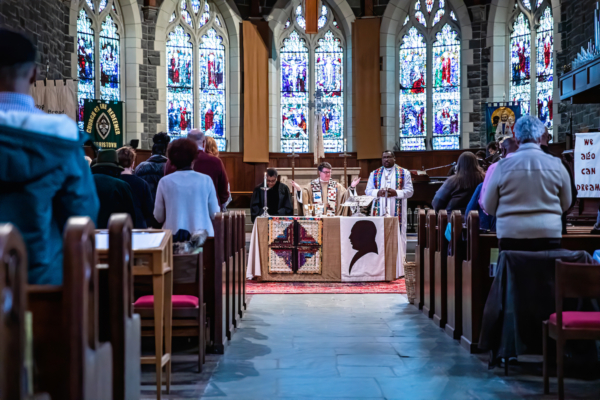 At center, the Rev. Cynthia Black, rector of the Church of the Redeemer, presides at a Eucharist on Jan. 19. Joining Black at the altar are, to the left, the Rev. Elizabeth Cotton, Bethel AME Church’s associate minister, and to the right, the Rev. Sidney S. Williams Jr., senior pastor at Bethel. The altar frontals include a silhouette of Martin Luther King Jr. and a modern version of the safe house quilt symbol said to have been used by people helping slaves escape along the Underground Railroad. Photo: Rebecca K. Walker

As the joint services began, members of both parishes began discovering their common roots, including in the liturgy and the lectionary, but there were differences. At the first Bethel service, Green and Williams agreed that he would end the service with AME’s traditional altar call, something that is atypical in Episcopal churches. It left some people in tears.

The experience of people “black, white, gay, straight, lesbian at the altar just pouring their hearts out to God in this awesome fellowship” helped those who had felt alienated from their denominations for who they were feel like they had come home, he said.

Williams and Black say there is still much work to do.

Calling the Season of Reconciliation her “favorite part of the year,” Black said, “I see that we’re still in our comfort zones. We do these things together, but we’re still separately together.”

“It’s not so much a black and white thing as it is a normal human nature kind of thing,” Black said. 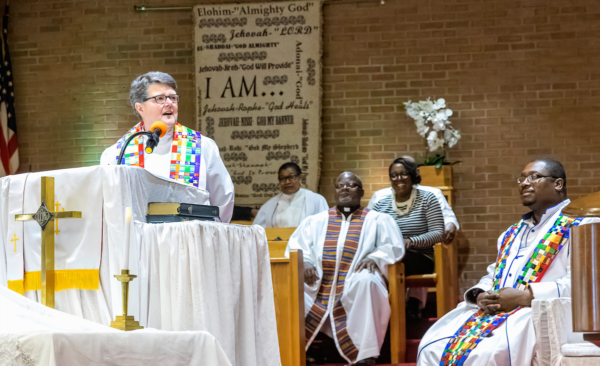 The Rev. Cynthia Black, rector of the Church of the Redeemer in Morristown, New Jersey, preaches during the Feb. 2 service at Bethel AME Church of Morristown. Listening are the Rev. Sidney S. Williams Jr., Bethel’s senior pastor, right, and others. Photo: Rebecca K. Walker

The two congregations come together for other annual events like a Juneteenth celebration. They join civic events such as the Whippany River cleanup. They tend to refer to each other as being from the same family, although Williams wishes there were “more of a yearning to come together instead of, ‘Oh, we’ve got to go see the in-laws again.’”

Black agrees. “As wonderful as the experience is, I’m wanting us to go one step further, and I don’t know how to do that, and maybe I should let go of that and say, ‘This is good enough. It’s great and it is so much more than anybody else does. Let’s just celebrate this.’”

These 10 years have taught Williams that people of faith often try to deal as legislative bodies with things like racial reconciliation and disagreements about sexuality and hope that their members simply agree.

“But wouldn’t it be more powerful if, within our own individual communities, we can begin a season of reconciliation, so maybe what Redeemer and Bethel are doing can become a model for other churches?” he asked. “Why not just start being neighborly?”

Editor’s note: An earlier version of this story incorrectly stated the year that the Rev. Cynthia Black became rector of the Church of the Redeemer.