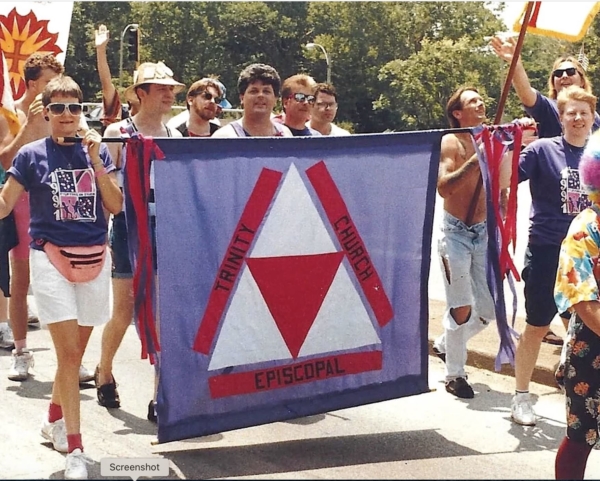 [Diocese of Missouri] Trinity Episcopal Church in St. Louis’ Central West End is the first site in Missouri to be named to the National Register of Historic Places (NRHP) for its significance in LGBTQ history. It is the first and only such site in Missouri and the only Episcopal parish in the country so honored. Trinity is recognized in particular for the years 1969 to 1993, which include its early support of gay rights, its embrace of LGBTQ parishioners and community members, and its compassionate response to the first AIDS patients in the 1980s.

The recognition of Trinity is part of an effort by the U.S. Department of the Interior to document a more complete story of the gay rights movement, a project announced in May 2014 by Secretary Sally Jewell. The NRHP is the U.S. federal government’s official list of districts, sites, buildings, structures and objects deemed significant to American history and worthy of preservation. Currently there are 93,500 sites across the country, with LGBTQ sites numbering less than 20.

“Trinity, as a progressive Episcopal church, continues today as an energetic supporter of LGBTQIA+ worshippers,” said the Rev. Jon Stratton, rector of the church. “We are honored by the NRHP recognition and wear this designation proudly.”

A formal dedication ceremony, including the installation of a plaque on the exterior of the church at 600 N. Euclid Ave., will be held on Saturday, June 13. Bishop-elect Deon Johnson, whose ordination is planned for April 25, will be an honored guest and speaker. Johnson will be the first openly gay bishop to serve in the Diocese of Missouri.

“Trinity’s longtime support for the LGBTQIA+ community dates back to its serving as the meeting space of St. Louis’ first gay rights organization, The Mandrake Society, in 1969,” said Steven Brawley, founder of the LGBT History Project in St. Louis.

The NRHP designation came after a concentrated period of reflection, recollection and research by members of the church and those involved in the preservation of St. Louis’ early gay and lesbian history.

Aiding the application process were longtime Trinity parishioners who are keepers of parish records and institutional memory for the years cited in the NRHP designation – Ellie Chapman, wife of the late Trinity rector Rev. William Chapman; Etta Taylor, church archivist; and Jym Andris, community historian. Their work was supplemented by Ian Darnell, curatorial assistant for the LGBTQ Collection at The Missouri History Museum, and Steven Brawley.

University of Kansas professor Katie Batza wrote the application as an extension of a current book project and as part of her ongoing work with the National Park Service LGBT Heritage Initiative. She said that as the application took shape, Trinity Church’s ties to the LGBTQ community were inspirational.

“It was encouraging to see how committed Trinity was to the rights of all of its gay and lesbian parishioners at a time when these rights largely were unknown to the mainstream,” she said. “The first Mandrake Society meeting at Trinity was one of a handful of local, national and global political actions and protests in 1969 – including the Stonewall Riots in Greenwich Village – that marked the start of a new civil rights movement.”

Trinity Episcopal Church, founded in 1855, has stood at the corner of Euclid and Washington avenues since 1935. Trinity is urban, socially progressive and Anglo-Catholic in its worship. Its rector is 35-year-old Jon Stratton, a social justice activist involved with the Clean Missouri campaign and a member of the leadership team at Missouri Jobs with Justice.

– Michael Shepley is a member of Trinity Episcopal Church.