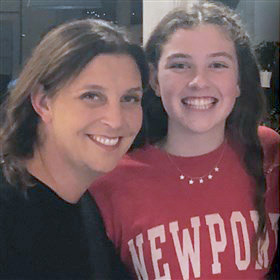 [Diocese of Los Angeles] Sarah Chester, 45, a trustee of St. Margaret’s Episcopal School in San Juan Capistrano, California, and her daughter Payton, 13, an eighth-grade student there, were among the nine people who died in a helicopter accident on Jan. 26 in Calabasas.

Gianna, Payton and Alyssa were members of an AAU (Amateur Athletic Union) basketball team based at Kobe Bryant’s Mamba Sports Academy. The group was headed for a basketball tournament at the academy’s Thousand Oaks location when the crash occurred. According to news reports, Bryant and his family often traveled by helicopter to avoid traffic.

“The deaths of Sarah and Payton, beloved members of our diocesan family, in a tragic accident receiving global attention serve as heartbreaking reminders of the connectedness and unity of all creation – of the indissoluble bonds among all who walk in faith,” said Bishop John Harvey Taylor of the Diocese of Los Angeles. “Each of us in the Diocese of Los Angeles is praying for Chris, Sarah’s husband; for Hayden and Riley, Payton’s brothers; for Catherine George of St. Matthias in Whittier, Sarah’s mother; for the whole St. Margaret’s Episcopal School community; and for the Bryant family and the families of all who died.”

Catherine George told NBC News that Payton was an accomplished basketball player who “loved playing for Kobe Bryant. He was a great coach.”

She said Sarah was “the heart of that family,” a devoted mother who spent much of her time nurturing her children’s talent for sports and the family’s love of travel.

Payton had ambitions to play basketball in high school and college, said her uncle Andy George, a football coach at La Serna High School in Whittier. “She had the sweetest soul – the kindest, … gentlest person you would ever meet,” George told the Orange County Register. “She always had a huge smile on her face. Every time we would see her she would spend all her time with my little daughters.”

George said his sister Sarah was “the one that everybody counted on. She was there for everyone. She was everything to her family, to our family. Anytime I needed anything, she was the person I went to.”

– Janet Kawamoto is editor of The Episcopal News, a publication of the Diocese of Los Angeles.