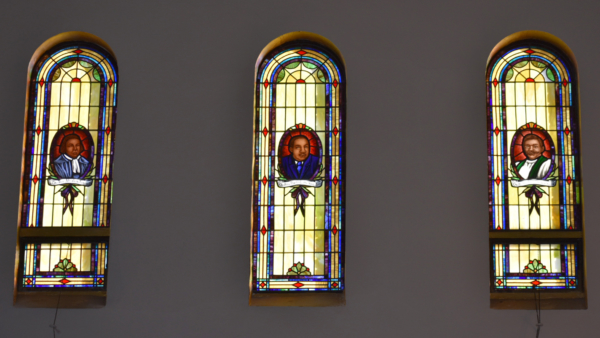 [Episcopal News Service – Chicago] The Rev. Martin Luther King Jr. is in good company at St. Edmund’s Episcopal Church on the city’s South Side. For nearly 25 years, the late civil rights leader has held a position of prominence between the Rev. Absalom Jones, the first African American priest in The Episcopal Church, and the Rt. Rev. James Theodore Holly, the first black Episcopal bishop. 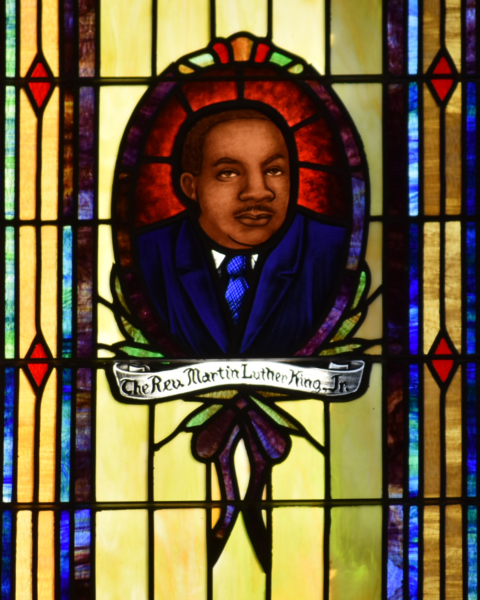 They are among the 33 black religious and historical figures whose simple portraits are featured in the stained-glass windows above the narthex, nave and sanctuary at St. Edmund’s, a church in Chicago’s mostly residential Washington Park neighborhood.

The Rev. Richard Tolliver, who led the campaign to install the windows in 1996, informally describes them all as “saints,” and King is set at the front of the church by design. “In the morning when the sun rises in the east, there’s something about the rays that come through that window that really illuminate him,” Tolliver, the congregation’s now-retired rector, told Episcopal News Service while sitting for an interview in the church’s front pew.

This weekend, Episcopal congregations across the country will honor King at various services and special events, and Presiding Bishop Michael Curry is scheduled to speak at an annual memorial breakfast in Boston, Massachusetts, on Jan. 20, the federal holiday devoted to King, who would have turned 91 this month. St. Edmund’s is one of a handful of Episcopal congregations that also have paid permanent tribute to the slain Baptist minister by depicting him in stained glass.

A window at All Saints’ Episcopal Church in Atlanta, Georgia, that was dedicated in 1997 shows King seated, with the Washington Monument in the background, evoking the March on Washington and King’s “I Have a Dream” speech. The window also features Absalom Jones, Mother Teresa and Samuel Seabury, The Episcopal Church’s first bishop. 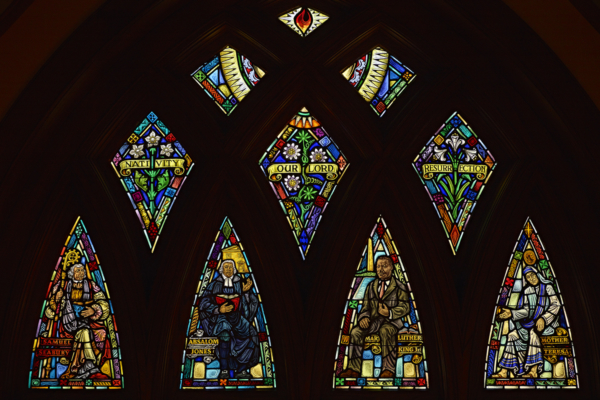 The Rev. Martin Luther King Jr. is depicted in a stained-glass window at All Saints’ Episcopal Church in Atlanta, along with Samuel Seabury, Absalom Jones and Mother Teresa. Photo: Parlee Teague

Another example can be found at Boston’s St. Cyprian’s Episcopal Church, one of two co-founders of the city’s Martin Luther King Jr. Day breakfast, now in its 50th year.

At St. Cyprian’s, King is portrayed in a minister’s robe above the words “I Have a Dream,” and his stained-glass panels are positioned next to panels featuring abolitionist Frederick Douglass. The church’s windows honor a total of 16 “black heroes,” in the words of parish treasurer Josephine Mitchell. 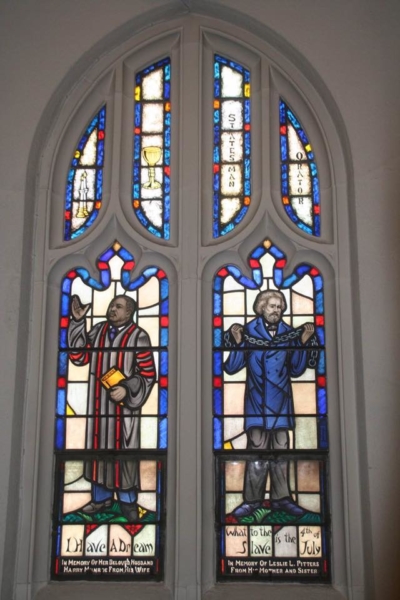 Mitchell, 67, has attended services for 48 years at St. Cyprian’s, which is located in the Roxbury neighborhood south of downtown Boston. A native of Belize, Mitchell explained that she wasn’t fully aware of the United States’ history of racial segregation before immigrating in 1972, but her husband shared with her stories of growing up in segregated South Carolina.

She thinks the stained-glass windows offer a valuable lesson in black history. “It’s not just for the ambiance and beautification of the church, but really, it’s a source of education,” she said in a phone interview.

Mitchell also feels a personal connection to King, since she shares his birthday, Jan. 15. She listens to his “I Have a Dream” speech every year.

“Every time I hear that speech, it just resonates with me, and it just brings chills to me because he was such an influence in the community,” she said. “And he didn’t just reach out to blacks, he reached out to everybody.”

Before Tolliver became rector of St. Edmund’s in Chicago, he spent several years in the 1970s as rector of St. Cyprian’s in Boston. The Boston congregation’s King window was already installed at the time, and Tolliver oversaw the installation of additional stained-glass windows, including one honoring Massachusetts Bishop John Burgess, The Episcopal Church’s first black diocesan bishop.

The Boston and Chicago congregations were founded around the same time in the early 20th century but under different circumstances. St. Cyprian’s has long been a congregation with a large number of West Indian immigrants, who began worshipping together in 1910 because they weren’t welcomed at that time by white congregations in Boston.

When St. Edmund’s formed in Chicago in 1905, its parishioners were mostly white. By the 1920s, membership had dwindled due to white flight as more black residents moved into its South Side neighborhood, Tolliver said. Those new residents helped St. Edmund’s grow and transition into a vibrant African American congregation.

In 1948, when the neighborhood’s Greek Orthodox congregation chose to move to the suburbs, it sold its church building to St. Edmund’s, which has worshipped ever since in this church at the corner of Michigan Avenue and 61st Street. 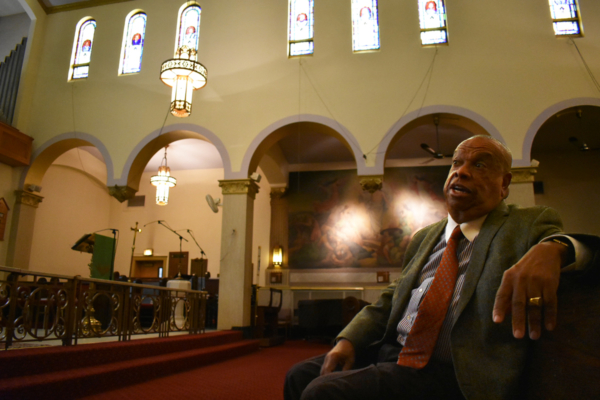 The Rev. Richard Tolliver, 74, who retired in 2017 as rector of St. Edmund’s Episcopal Church in Chicago, talks about the stained-glass windows that were installed during his time with the congregation. As rector, he also oversaw creation of the St. Edmund’s Redevelopment Corporation, which he still leads as president and CEO. Photo: David Paulsen/Episcopal News Service

The worship space hadn’t changed much by the time Tolliver joined the congregation in 1989. “All of the iconography and paintings reflected a Greek Orthodox facility,” he said, “so we wanted to have more cultural symbols and images in the church that reflected the congregation of the day.”

Drawing on his experience at St. Cyprian’s in Boston, Tolliver envisioned converting the unadorned windows at St. Edmund’s into stained glass, featuring King and other prominent black figures. He presented his idea to the congregation at the 8 a.m. service one Sunday morning and asked if any parishioners would be interested in sponsoring one of the 33 windows, each costing a couple thousand dollars. 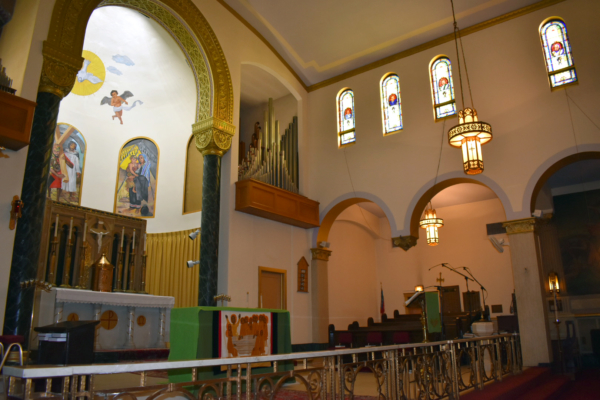 Tolliver had 29 volunteers from that early service alone, and after the 10:30 a.m. service, another four had come forward to sponsor the remaining windows. Their names are featured on a plaque in the narthex.

Today, the King window is a particular source of pride for longtime parishioners like Doris Howell.

“He was an inspiration for me,” said Howell, a 92-year-old retired teacher. She also felt it was important for her students to learn about King’s legacy. “Dr. King was part of what I wanted to impart to the children.”

Howell remains active in the congregation and continues to sing every Sunday in the choir, which takes its seat to the right of the altar, just below the windows featuring Jones, King and Holly. The windows around the church are positioned high above and grouped in threes, with 15 on the right side of the church and 15 on the left. The other three are found in the narthex, near the church’s front door. Each features a simple portrait and a name.

Howell said she sometimes sits in the choir pews and looks up at the light coming through the faces of all those well-known men and women, and in that moment, “I feel like the Lord is shining through them on me,” she said.