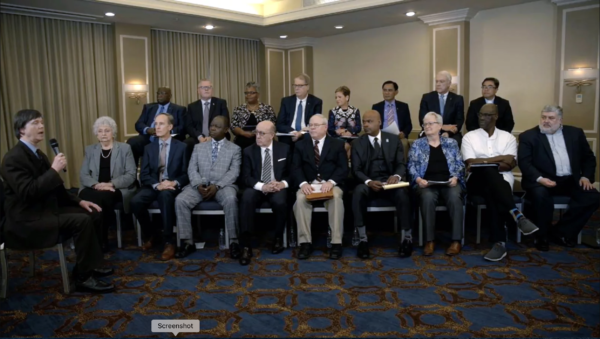 Members of the unofficial group of United Methodist bishops and advocacy group leaders who negotiated a proposal to split the denomination speak about the process Jan. 13, 2020 on a livestreamed panel hosted by United Methodist News Service. Video screengrab via UMNS

They also forecast dire consequences if the proposal, officially called “A Protocol of Reconciliation and Grace Through Separation,” isn’t approved this May by the denomination’s global decision-making body.

United Methodist Bishop John Yambasu of Sierra Leone, who first convened the group that led to the negotiations last summer, said a failure of the proposal would be “catastrophic for the church.”

“It would be total disaster,” Yambasu said. “It would mean more pain and more harm to the entire church.”

The unofficial group, which was joined by veteran mediator Kenneth Feinberg, offered a behind-the-scenes look at how they arrived at the proposal, which was announced earlier this month and is now being written into legislation for delegates to approve at the General Conference in Minneapolis in May.

“We’re asking them to do something historic, not just for the United Methodist Church, but frankly something needed in America and in the world right now, which is to watch a group of people in a large, 12 million-person institution cooperate in such a way that we help each other do the things that we desire to do and answer the callings we feel God has laid on our hearts,” said the Rev. Tom Berlin, who represented centrists in the group.

United Methodists’ conflicts, which have expressed themselves mostly in questions of the inclusion of its LGBTQ members, go back to 1972, recalled Patricia Miller, executive director of the conservative United Methodist Confessing Movement.

That year the General Conference voted to add language to the denomination’s Book of Discipline declaring that “the practice of homosexuality is incompatible with Christian teaching.”

That language was revisited every four years at subsequent General Conferences until 2016, when delegates voted to hold a special session to finally settle the debate. That meeting, held in St. Louis, Missouri, in February of last year, voted to strengthen the enforcement of that language banning the ordination and marriage of LGBTQ United Methodists, but many LGBTQ United Methodists and their allies immediately vowed to resist and remain in the denomination.

Now, after nearly five decades of controversy, Miller said, “It’s time for us to move to amicable separation.”

Despite their victory at the special session, it is the conservative congregations and conferences that would split from the denomination to form a new body under the new proposal. If approved, they would retain ownership of their church buildings and other properties and receive $25 million to form a new “traditionalist” Methodist denomination.

At Monday’s event, Yambasu described the special session as a “catastrophe” and a “poor witness of who we are as United Methodists.”

The bishop returned to Sierra Leone “devastated,” he said. American United Methodists had presented a “galaxy of plans,” he said, “but none of these plans to us seem to provide the answer to the situation.”

Last summer, still hoping for a solution, he called a meeting of several bishops from outside the United States and leaders from advocacy groups identified as having traditionalist, centrist and progressive views.

To be successful in yet another round of meetings, Reconciling Ministries Network Executive Director Jan Lawrence said, “we felt like we needed something different.”

“Our answer to that was to discuss having a professional mediator join us,” she said.

With Feinberg on board, they settled on a group of 16 participants who would represent a variety of viewpoints in the denomination. The mediator had acted as special master of the U.S. government’s September 11th Victim Compensation Fund and later as the special master for TARP executive compensation.

“Two of the things that he offered during this process were that our job was to get to yes, and he kept reminding us of that. He also reminded us that we had the opportunity to write the narrative, and that if we didn’t write it, someone else would,” said Lawrence, who represented progressives.

The group met for negotiations over six two-day sessions, sometimes breaking a deadlock with prayer, according to participants.

Like others within the church, LGBTQ United Methodists and their allies still are processing the proposal, Lawrence said.

Some are hopeful, she said. Some are skeptical. Some view the denomination as “beyond reform.”

And while the proposal isn’t perfect, she said, it does call for a moratorium on church trials against clergy who are LGBTQ or who perform same-sex weddings.

“It changes the landscape for people who have been deeply harmed,” said the Rev. David Meredith, who has faced complaints of violating church law since marrying his husband in 2016.

Centrists within the denomination had three priorities, according to the Rev. Junius Dotson.

They wanted to have “room” for different perspectives, Dotson said. They wanted to remove all language and policies from the denomination’s rulebook that treated LGBTQ United Methodists as “second-class Christians.”

“And my prayer is that the post-separation United Methodist Church will continue to be a big tent church, a place where everyone can be the best that God has called them to be — the best expression of what it means to be a United Methodist.”

The Rev. Keith Boyette, president of the conservative Wesleyan Covenant Association, wouldn’t speculate how many churches and conferences might join a new traditionalist Methodist denomination, though he said he anticipated it would be a global denomination.

While traditionalists’ beliefs were affirmed by the special session, Boyette said, they were willing to leave to “set the church free from this conflict.”

“Progressives and centrists were making it very clear that they were not prepared to voluntarily leave the church and that they would persist in their advocacy for their deeply held convictions and beliefs,” he said.

Before the special session, Boyette had said he would recommend Wesleyan Covenant Association members leave the denomination if delegates did not back the existing language in the Book of Discipline. Afterward, the association had affirmed that still was an option if conflict continued.

“As everyone has conceded, we’ve been preparing as a contingency for just this sort of event to unfold, but still substantial work remains to be done,” Boyette said.

The new denomination likely would not meet in Minneapolis immediately following the General Conference, he said, but perhaps before the end of the year.

Yambasu, however, was confident that United Methodists in Africa, where the denomination is growing fastest, will support the proposal.

“I believe 100% of Africans will support this proposal,” he said. “I’m very positive about that.”