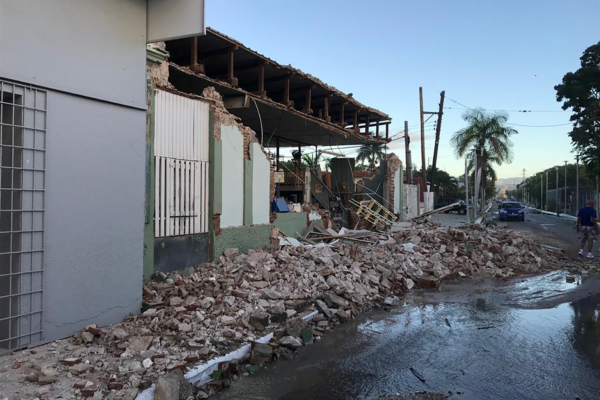 [Episcopal News Service] Several churches in the Diocese of Puerto Rico have suffered severe damage from the series of earthquakes that have struck the island in recent days, killing at least one person and injuring at least eight.

Hundreds of minor earthquakes have hit Puerto Rico’s southwest coast since Dec. 28, according to the U.S. Geological Survey, but a 5.8-magnitude quake on Jan. 6 and a 6.4-magnitude one on Jan. 7 destroyed buildings and shut down the island’s power grid, leading to a state of emergency declaration.

Two of the diocese’s churches – Santa Cecilia in Guánica and San Juan Apóstol in Yauco – appear to be in danger of collapsing, according to the Very Rev. Mario Rodríguez, dean of the Cathedral of St. John the Baptist in San Juan and the diocese’s canon to the ordinary. Santo Nombre in Ponce and the Quinta Tranquila retreat center in Yauco also suffered major structural damage, Rodríguez told Episcopal News Service. Other church buildings had minor damage.

“We have been monitoring the situation closely and tomorrow (Wednesday) a team from the Diocesan Center, including a structural engineer, will go to the affected areas to carry out a formal damage assessment and to coordinate relief efforts,” Rodríguez said by email. “Today, local teams began to distribute water and meals in affected areas. These efforts will be reinforced tomorrow by the team from the Diocesan Center.”

Puerto Rico has endured a string of crises in recent years, from the devastation of Hurricane Maria in 2017 to a massive political scandal in 2019.

“Today our Puerto Rico faces again the challenge of keeping calm and moving forward with faith and hope,” Rodríguez posted on the cathedral’s Facebook page. “Certainly, we are not newbies in this, but yes, vulnerable sons and daughters of God. We face with faith this expression of our nature and trust in the God who loves us and who we call father.”