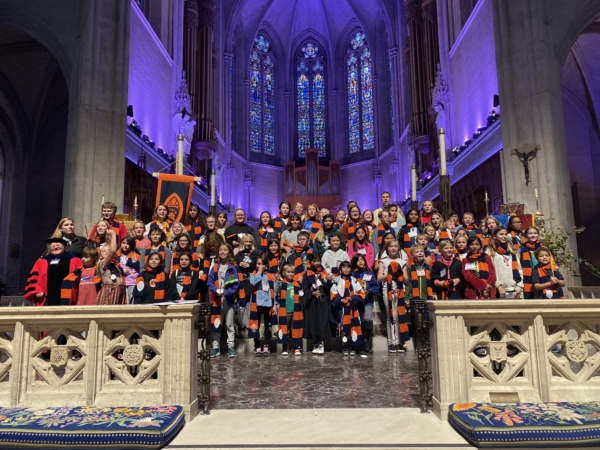 [Episcopal News Service] Based on the number of excited children who showed up to Harry Potter Day at San Francisco’s Grace Cathedral on Nov. 16, you might find it hard to believe that the last book in the series was published 12 years ago. About 80 children – far more than the cathedral staff initially expected – from around the Bay Area came to make wands, play Quidditch and learn how prayer can fend off scary feelings.

And given the day’s focus on the overlap between J.K. Rowling’s books and the Christian worldview, you also might find it hard to believe that in their heyday, the books faced fierce opposition from some fundamentalist Christians who claimed they were satanic. In 2006, the American Library Association named the Harry Potter books the most challenged of the 21st century up to that point because so many parents had tried to remove them from libraries on the grounds that they were anti-Christian and dangerous to children.

Caren Miles, the Diocese of California’s associate for faith formation, never saw it that way.

“I just remember reading the first book before I even heard that folks were getting upset about it; the baptism analogy hit me so hard over the head that I didn’t think anyone would have a problem with it. [The Christian imagery] seems so blatant to me!” said Miles, who organized this first-ever Harry Potter Day for the cathedral, which is the seat of the Diocese of California.

Rowling, a member of the Scottish Episcopal Church, has said that the parallels between her books and the Gospels are intentional, although she rarely delves into more details. The only explicit connection to Christianity is the appearance of Biblical passages on two gravestones in the final book, but readers have long observed allegorical elements in the stories.

“To me [the religious parallels have] always been obvious,” Rowling told an interviewer in 2007. “But I never wanted to talk too openly about it because I thought it might show people who just wanted the story where we were going.”

Some of Rowling’s own faith journey is hidden in the books, Miles said.

“I love to tell kids the trivia that most of them don’t know – even the ones who know every little bit of trivia – which is that Harry receives his Hogwarts [acceptance] letter on his 11th birthday because that’s the day that J.K. Rowling was baptized,” Miles told Episcopal News Service. 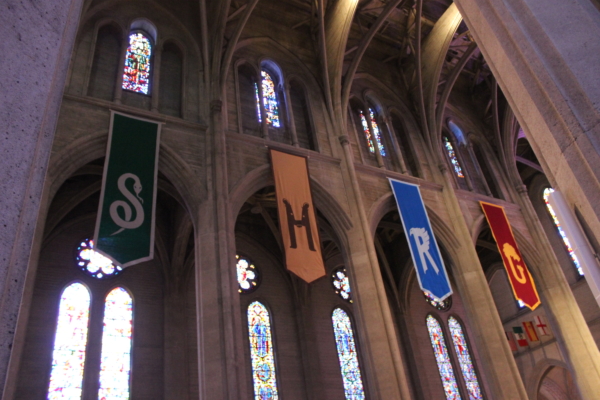 The flags of the four houses of Hogwarts (Slytherin, Hufflepuff, Ravenclaw and Gryffindor) hang in the nave of Grace Cathedral for Harry Potter Day. Photo: Mike Scrutton

“There are so many examples of – not only faith, but that idea of life and resurrection coming through death, especially in the seventh book,” Miles said, citing a particular scene that has been commonly interpreted as a vision of the afterlife in which Harry talks face to face with a dead character.

“There are so many great role models in the books. Even Draco Malfoy ends up making a turn. Snape obviously makes a huge turn,” Miles went on, referring to two characters who are initially portrayed as villains but prove to be more complex. “So it’s this [sense of] redemption.”

Miles first organized a Harry Potter Day almost 20 years ago, when she was working for the Diocese of Dallas, and said it’s a great way to attract the young families that churches are so eager to reach.

“It was that idea of trying to have something for families mainly in the diocese, but also something they can invite friends to as an easy entry into The Episcopal Church,” Miles told ENS. It shows parents who might be unfamiliar with the church that “we are fun, we are silly, your kids can run around and be themselves and be kids!”

Harry Potter Day was a mix of fun and more serious topics, of religion and Potter lore. It started with morning prayer, followed by “Defense Against the Dark Arts,” which in the series is a Hogwarts class in repelling curses and creatures like the boggart, a manifestation of one’s worst fear. In the books, this is done with a Patronus – a sort of spiritual guardian in the form of an animal. On Nov. 16, the children learned that prayer can be its own kind of Patronus when fear becomes overwhelming.

Then it was time for Quidditch, the sport described in detail in the series that is played for real by enthusiasts. 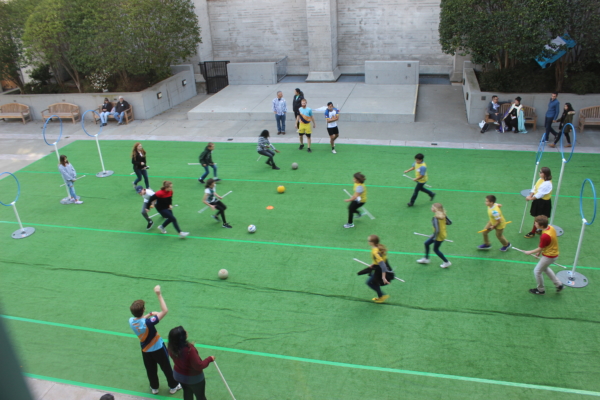 “We had a college Quidditch team come and teach them Quidditch in the plaza,” Miles said. “The Bay Area Breakers came, brought all the equipment, and were willing and young enough to run around with small kids all day.”

That was followed by a wand-making class, in which the kids could choose the materials for the wand based on parts of their personalities.

“It’s kind of fun to be able to talk about spiritual gifts in that way, to talk about what are the things that you have that we can amplify as good,” Miles said. 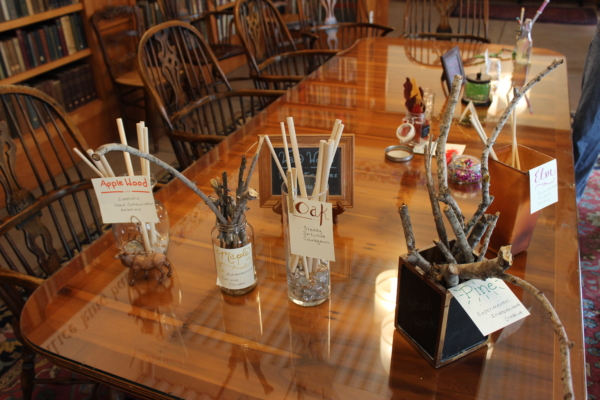 And since Hogwarts students take Potions classes, the children then learned about another kind of supernatural transformation: the Eucharist. The Rev. Kyle Oliver, who has developed a set of cards that break down elements of the liturgy to explain them more fully, “walked the kids through the entire Eucharistic prayer, explaining all of the little magic pieces,” Miles said.

“And then we had a closing Eucharist and a group photo. Everybody went home happy!”

In her sermon at the Eucharist, the Rev. Lindy Bunch, priest in charge at Trinity St. Peter’s in San Francisco, focused on Dobby, a lowly enslaved elf who ends up making the ultimate sacrifice to save Harry and his friends. She connected his story to Romans 8, which talks about how Christ frees all from bondage and ends with the famous passage: “For I am convinced that neither death nor life, neither angels nor demons, neither the present nor the future, nor any powers, neither height nor depth, nor anything else in all creation, will be able to separate us from the love of God.”

“We’re not teaching them that there are bad things in the world. They already know that,” Miles said. “But we’re giving them tools and emotional help to stick together, to fight, [to] hope. We’re giving them hope.”