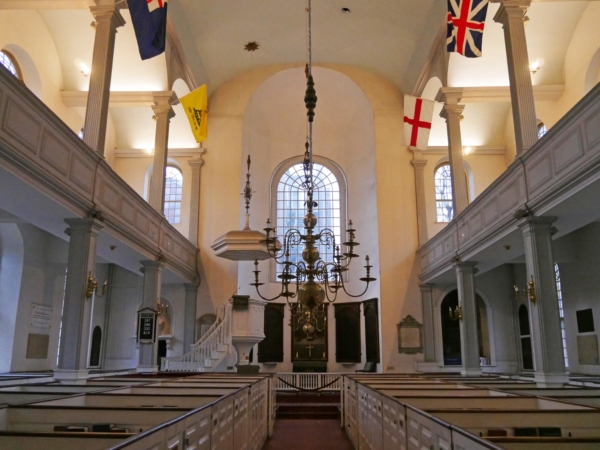 [Episcopal News Service – Boston, Massachusetts] Old North Church is a living witness to one of the most significant chapters in American history. Immortalized in Henry Wadsworth Longfellow’s poem “Paul Revere’s Ride,” the white spire rising above the narrow streets of Boston’s North End is where two lanterns were hung to signal the approach of British troops that started the Revolutionary War.

But while Old North has been known as a symbol of the American fight for liberty and justice, its story is also intertwined with the national sin of slavery. 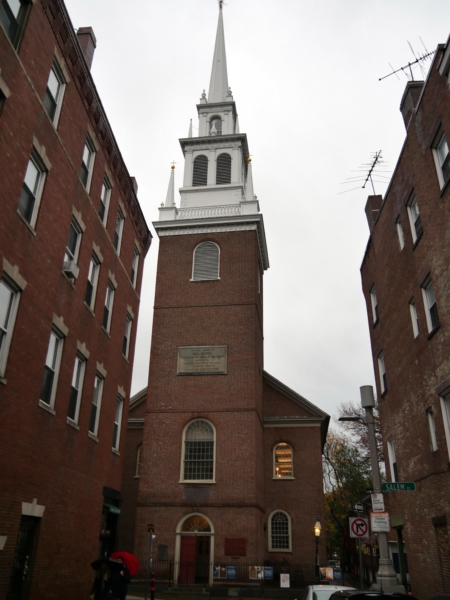 Old North Church, built in 1723, is the site of the lantern signal — “one if by land, two if by sea” — that set Paul Revere off on his famous ride. Photo: Egan Millard/Episcopal News Service

In October, the leadership of the 296-year-old church – which is Boston’s oldest standing church, the city’s most visited historical site and an active Episcopal congregation – held a panel discussion on Old North’s links to slavery. New research had revealed that some of its most prominent early members were slave traders and they had donated large sums of money to pay for the construction of the original steeple in 1740.

One name in particular – Newark Jackson – is still familiar to the Old North community. In an adjacent building, the historic site runs a re-creation of an 18th-century chocolate shop named for Jackson, who owned and operated a chocolate shop elsewhere in the North End in the 1740s. Since 2013, Captain Jackson’s Historic Chocolate Shop has offered visitors the chance to watch the process of Colonial-era chocolate making and taste (and buy) the results. In the church, there was also a memorial sign in the private pew Jackson occupied when he attended services.

When Old North started the chocolate shop, Jackson’s name was “picked somewhat out of a hat,” without knowing much about him other than his ownership of an Old North pew and a chocolate shop, said the Rev. Stephen Ayres, the vicar at Old North and executive director of the Old North Foundation.

“‘Jackson’ just sounded good, so we picked that without knowing a lot about him,” Ayres told Episcopal News Service.

The deeper research started after Ayres happened upon a book called “Unfreedom: Slavery and Dependence in Eighteenth-Century Boston” by Jared Ross Hardesty, which mentions Newark Jackson – not as a chocolatier but as a slave owner. Old North asked Hardesty to do additional research, and the results were informative but upsetting. 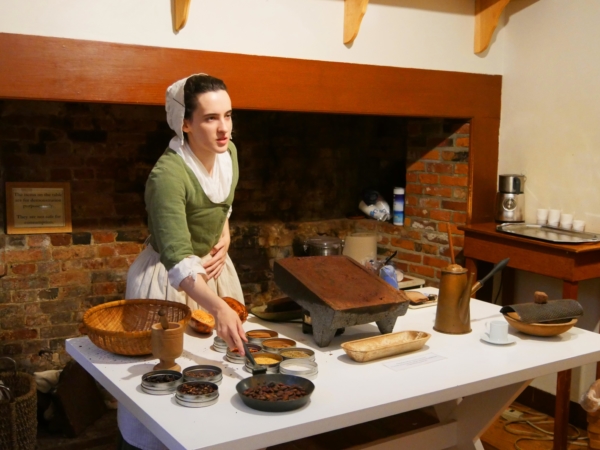 “Jared eventually found the ship manifests, and that’s when he called me and said, ‘I’ve got bad news for you,’” Ayres said.

The news was that Jackson and several other Old North members were participants in a slave-smuggling ring. Defying British law, they transported slaves from Barbados to Suriname, outside the British Empire. In 1744, Jackson and fellow Old North parishioner George Ledain were killed in a mutiny shortly after leaving Suriname, according to Hardesty’s research. On the ship, Dutch authorities found 15 slaves who had not been sold: 2 adults and 13 children. Jackson himself owned three slaves at the time of his death, according to Hardesty.

Hardesty’s research had “given us some work to do to figure out how to go from where we are to where we should be,” Ayres said.

The first step was to present the findings to the community at that panel discussion in October, which included Hardesty, another historian, a lawyer and the Rt. Rev. Gayle Harris, bishop suffragan of the Diocese of Massachusetts. The commemorative sign in Jackson’s pew has been removed and may be replaced with a new one. Further changes are in the works, Ayres said. 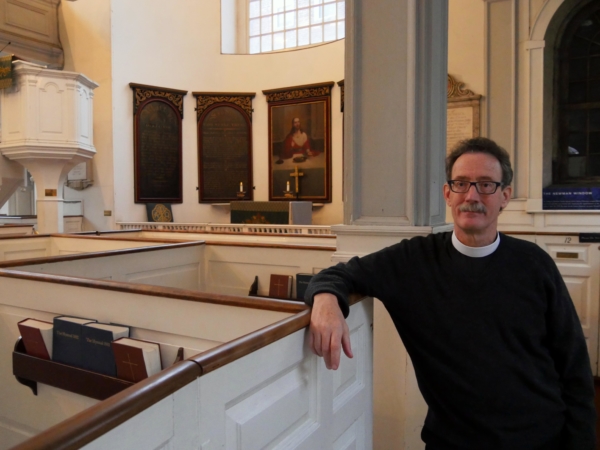 “We have a board meeting next week and on their agenda is to talk about de-branding the [chocolate] shop, which would be to stop calling it ‘Captain Jackson’s.’ We still want to do the chocolate program, but we don’t want to be honoring somebody who by our standards is not honorable,” Ayres told ENS.

The discoveries about Jackson and the other parishioners could be just the tip of the iceberg. Even in a region not typically associated with slavery (Massachusetts abolished it in 1783), almost 10 percent of Boston’s population in the 1740s was enslaved.

“There was probably enslaved labor working on the construction of church; we haven’t really done the deep dive into our archives to see if we can find any information about that, but that’s for future research. We know the first two rectors of the church were slave owners,” Ayres said.

Slaves and free black citizens attended Old North, and there are multiple records of a particular free black family, Ayres said. But all people of color had to sit up in the mezzanine, which was the least comfortable part of the church – cold in the winter and hot in the summer.

“Because of the nature of slavery, black people did not have much of an opportunity to get together and socialize. So this was a real source of community to them. I also think about how they’re sitting up there looking down on all their owners,” Ayres said.