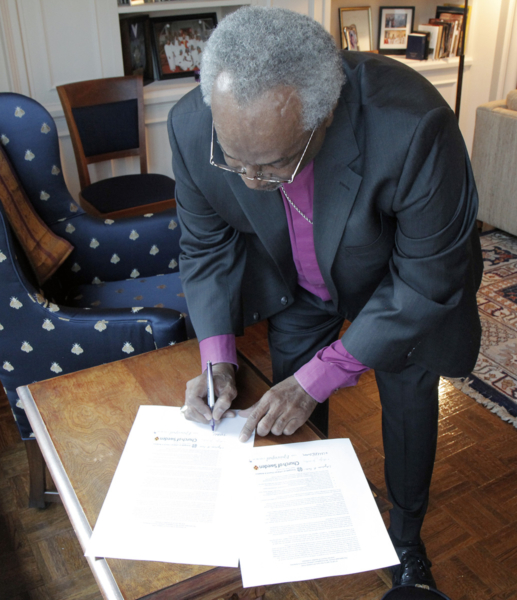 On Sept. 24, Presiding Bishop Michael Curry added his signature to a joint statement between The Episcopal Church, the Evangelical Lutheran Church in America and the Lutheran Church of Sweden outlining the churches’ “call to join in the care of creation.” Photo: Lynette Wilson/Episcopal News Service

[Episcopal News Service] In April, the world lost a 700-year-old glacier to climate change. Oceans are warming, oxygen levels are declining as ocean acidity rises, and fish are dying. At the same time, sea levels are rising and island nations are poised to disappear.

It’s alarming evidence of the climate emergency threatening all of Earth’s inhabitants.

On Sept. 24, faith-based organizations held a daylong interfaith event to address that emergency, meeting at The Salvation Army in New York’s midtown Manhattan, a half-mile from United Nations headquarters and a day after world leaders met in a climate summit to discuss plans to meet the objectives laid out in the Paris agreement.

“What’s happening all over our city, all over New York right now, really all over the world, people are talking about movement,” said the Rev. Stephanie Spellers, canon to the presiding bishop for evangelism, reconciliation and stewardship of creation in The Episcopal Church, during a noontime Eucharist held at the Episcopal Church Center’s Chapel of Christ the Lord.

“You’ve been talking about a movement, many of you, you’ve been stirring movement, you’ve been praying for movement. At least in The Episcopal Church, we also talk a lot about movement. In particular, we’ve been talking about a Jesus movement. We even call ourselves the Episcopal branch of the Jesus movement. And we say that together, we are a community of people who are following Jesus, follow Jesus into loving, liberating and life-giving relationships with God, with each other and with the whole of creation.” 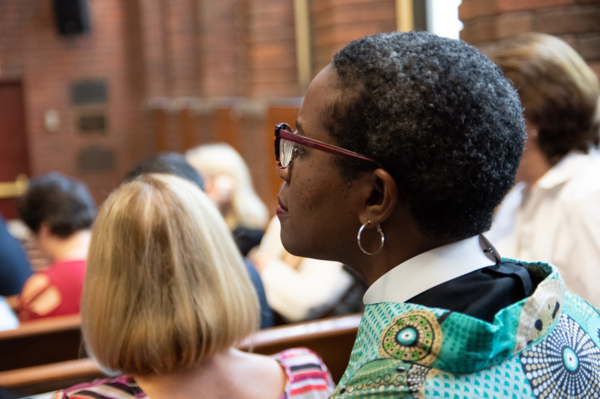 The Rev. Stephanie Spellers, canon to the presiding bishop for evangelism, reconciliation and stewardship of creation in The Episcopal Church, looks on during a Sept. 24 interfaith climate emergency event held at The Salvation Army in midtown Manhattan. Photo: Simon Chambers/ACT Alliance

Spellers pointed to the day’s Gospel reading, Matthew 11:25-30, suggesting that, in it, Jesus is giving “loving advice” on how to lead a movement.

“I would invite you to even just imagine together that, as we engage in a climate movement that is a part of the Jesus movement, that creation care and climate justice, for us, is not only about burden and negation, but instead about tapping into the true source, an invitation to abundance and living more like Jesus,” she said.

Episcopalians, Lutherans, Roman Catholics, United Methodists, Muslims, Buddhists and Baha’i representing some 48 organizations came together to strategize ways faith-based organizations can address climate change by filling the gaps left by governments in regard to climate change and adaptation to its effects.

The event included breakout sessions to address justice, loss and damage, migration and emergency declarations as related to climate change.

The Episcopal Church has a long history of support for the environment and climate action.

“Episcopalians are members of a transnational union: We can stand up for our brothers and sisters, be they in the Dominican Republic, Puerto Rico or our Anglican brothers and sisters across seas, and we are one with them,” said the Rev. Melanie Mullen, The Episcopal Church’s director of reconciliation, justice and creation care. “[We can use our influence] to speak to bodies of power, to talk about their burdens and where they’re vulnerable, and hold our power and our privilege and use it well for those who are most vulnerable because they’re one of us in the part of our family.”

Speaking truth to power, however, is not reserved just for the church’s leadership; Episcopalians across the church have indicated they care for the environment through letter writing and other local campaigns aimed at calling attention to climate change and prioritizing care for creation.

“Episcopalians by far care about climate because of their faith in Jesus. [It’s] not just ancillary,” said Mullen. “And we care about people who are vulnerable. And we care about the world because of our interpretation of the Bible and of the way we read the Book of Common Prayer.”

Episcopalians, Lutherans, Roman Catholics, United Methodists, Muslims, Buddhists, Baha’i and others came together on Sept. 24 to strategize ways faith-based organizations can address climate change by filling the gaps left by governments in regard to climate change and adaptation to its effects. Photo: Simon Chambers/ACT Alliance

The U.N. secretary-general convened a climate summit on Sept. 23, a day before the first high-level debates of the 74th session of the General Assembly meeting in New York through Sept. 30.

The 2015 Paris agreement committed states to restricting global temperature rise to 2 degrees Celsius above pre-industrial levels. The agreement marked the first time nations came together under common cause to arrest climate change and adapt to its effects.

“This summit was designed from the beginning to be a moment of especially governments announcing their plans to ramp up their ambition to achieve their zero carbon objectives that they have set for themselves with the Paris agreement,” said Lynnaia Main, The Episcopal Church’s representative to the United Nations. “But most governments are not meeting their targets. … At the current target, we are well above 2 degrees. And the science, scientists agree that two degrees itself is not where we actually want to or need to be. We should be at 1.5.”

An October 2018 report release by the Intergovernmental Panel on Climate Change further raised the alarm at the international level.

“The report said we basically have 12 years to get this right before we reach the tipping point,” said Main. “Since that report came out, the level of urgency and alarm has risen dramatically within the U.N. And as a result of that report and the realization that governments aren’t meeting their targets, the secretary-general decided to hold this climate action summit to encourage governments to ramp up their ambition, so that we can try and achieve these targets.” 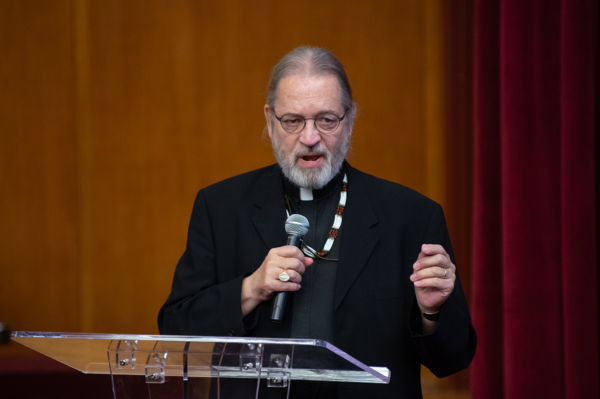 The Anglican Church of Canada’s National Indigenous Archbishop Mark MacDonald pointed to interfaith efforts to protect the Arctic from oil drilling as a victory for faith-based environmental advocacy during a Sept. 24 interfaith gathering in New York. MacDonald also serves as the World Council of Churches president for North America. Photo: Simon Chambers/ACT Alliance

The action that resonated worldwide, however, occurred on Sept. 20, when more than 4 million people in more than 160 countries took to the streets in a global climate strike.

The climate demonstration built on the momentum of youth-led school walkouts inspired by 16-year-old Swedish activist Greta Thunberg, who led the strike in New York and addressed the U.N. delegates on Sept. 23.

“The eyes of all future generations are upon you,” said Thunberg, criticizing world leaders for their “business as usual” approach to addressing climate change. “If you choose to fail us, I say we will never forgive you.”

Two of the New York climate strike youth organizers spoke during the Sept. 24 interfaith event at The Salvation Army.

Wohlgemuth and Xiye Bastida, who also addressed the interfaith gathering, said the youth intentionally made the strike an intergenerational event, recognizing that adults have the power to vote and have access to power in a way that youth do not. It was something Presiding Bishop Michael Curry acknowledged later that day when he suggested church leaders and church officials, who are used to leading, are following the youth this time.

“But in this particular moment, we are following our children, who have called us to account for caring for God’s world, because the inheritance that is theirs will not be there in the fullness that it needs to be there. And we are being called to account, and so now, the churches are following the children. And that is maybe the way we find ourselves stumbling into God’s future and changing it.”

Later in the evening on Sept. 24 before a reception held in his private residence, Curry added his signature to a joint statement between The Episcopal Church, the Evangelical Lutheran Church in America and the Lutheran Church of Sweden outlining the churches’ “call to join in the care of creation.”

“As we observe the Season of Creation, we renew the call for our churches to work together for the sake of Earth and to build collaborations wherever possible, both with other communities of faith and with diverse agents in our civil society. Now is the time for science, politics, business, culture and religion – everything that is an expression of human dignity – to address together this critical issue for our time,” read the statement.

The statement served as testament to a relationship established between the three churches.

“Climate change is a pressing critical issue for the future, and the present world,” said the Rev. Stephanie Johnson, who chairs The Episcopal Church’s Task Force on Creation Care & Environmental Racism, following the signing. “And that, regardless of how we move forward in politics, that the church itself will continue being the prophetic voice to change the world and be part of God’s creation.”