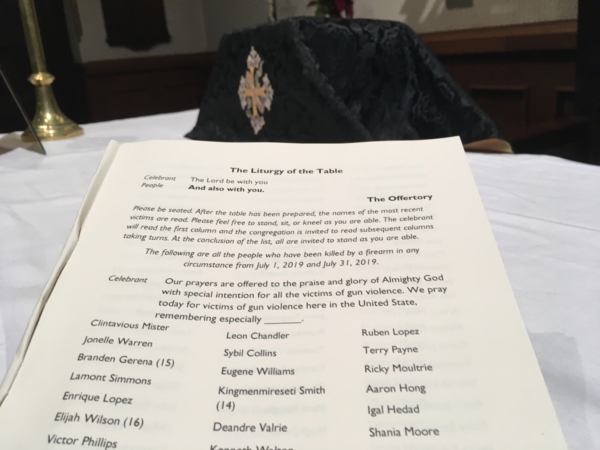 The list of victims’ names on the altar at Trinity Episcopal Church in Lenox, Massachusetts. Photo: Michael Tuck

[Diocese of Western Massachusetts] Gun violence, mass shootings and gun control are back in the news in the aftermath of the shootings in El Paso, Dayton, and Gilroy. But for two parishes in the Berkshires, the response to gun violence has taken a slightly different turn. Since January, a group of parishioners from Trinity Church and St. Helena’s Chapel has been meeting on the first Saturday of every month to pray for each of the victims of gun violence as part of a monthly requiem Eucharist. Instead of responding only to the horrific moments of mass shooting, they are focusing more broadly on the epidemic of gun violence in America.

“This started as a personal ministry for me,” says the Rev. Michael Tuck, the rector of the churches in Lenox, Massachusetts. “One of my parishioners had a relative who was killed in a home invasion. I’m almost ashamed to admit it, but I had never really internalized how this violence causes so many ripples. Every death affects so many people.”

At the center of the Eucharist is the list of names. Every month, those who died in the previous month are remembered by name. For Tuck, this service is rooted in his own spiritual history. “I come out of the Anglo-Catholic tradition, and I was always moved by the ministry of the Guild of All Souls. There is something incredibly powerful about saying that, no matter what, we pray for the dead. And not just as a group. There’s something powerful about praying for people by name.”

Each month, the list of names takes about 40 minutes to read, and the members of the congregation take turns. Ruth Arisman, one of the regular parishioners, highlights the impact of this part of the service. “Every month, I just worry that I will see a name I recognize,” she says.

Reading the names is sometimes a challenge. “Many of the names are unfamiliar to most of us, with different spellings and coming from different cultural backgrounds. Sometimes we stumble a little,” Tuck notes. George Bergen, another regular parishioner, also expressed this challenge: “In our difficulty to read the names, we become aware of the remarkable diversity of the communities in our country.”

Compiling the list of names isn’t as simple as it sounds. Right now, there is no easily accessible list of the names of all victims of gun violence in the United States. Individual news organizations may compile local or regional lists, but there is no national list. The Gun Violence Archive tracks a list of all incidents, but doesn’t include a list of names. In order to compile the list, Tuck checks each incident in the archive and copies each name. The list, as long as it is, is woefully incomplete. Some large jurisdictions and cities, such as Philadelphia and Houston, do not regularly publish names. Some towns and cities will publish suspects’ names, but not victims’. Even with these limitations, the list includes about 1,000 names each month.

Looking at each incident in the Gun Violence Archive has brought out the complexity of gun violence in America. “I was surprised at how many police officers are injured and killed in the line of duty. It makes the arguments from law enforcement about gun safety make a lot more sense to me,” says Tuck. Incidents of domestic violence can also be inferred from the list. “It’s hard to read when you see a last name repeated. It really brings domestic violence out into the open,” says Bergen. “And sometimes it’s three or four of the same name,” adds Richard Burke, senior warden at Trinity.

The next requiem Eucharist for victims of gun violence will be at Trinity Church’s chapel at 8 a.m. on Saturday, Sept. 7. The Rt. Rev. Douglas J. Fisher will be the celebrant. Resources – including the service sheet – may be found through the rector’s personal blog. If you would like more information or additional resources, please contact Tuck at fr.michael.tuck@gmail.com.