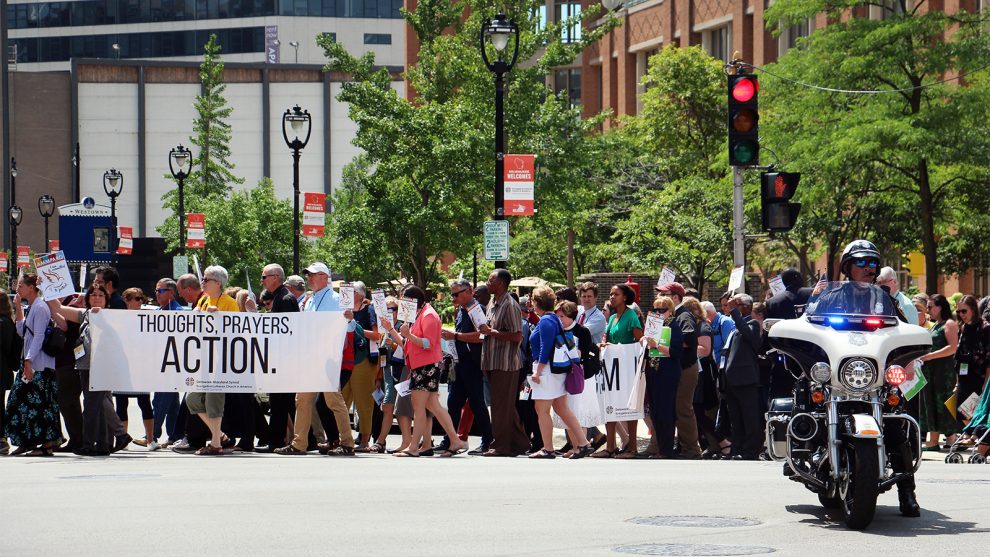 Hundreds of attendees at the ELCA Churchwide Assembly march to the ICE building in Milwaukee for a prayer vigil in support of migrant children and their families on Aug. 7, 2019. Photo: Emily McFarlan Miller/RNS

[Religion News Service – Milwaukee] More than 500 years ago, a monk named Martin Luther nailed 95 theses outlining his grievances with the Roman Catholic Church to the door of a church in Wittenberg, Germany.

On Aug. 7, members of the mainline Protestant denomination bearing Luther’s name taped 9.5 theses — expressing their concern for immigrants and refugees — to the door of the Immigration and Customs Enforcement building in Milwaukee.

The action was part of a prayer vigil for migrant children and their families during the ELCA Churchwide Assembly this week at Milwaukee’s Wisconsin Center.

It took place on the same day the Evangelical Lutheran Church in America declared itself a “sanctuary church body,” signaling its support for immigrants.

Both came in response to President Trump’s policies at the United States border with Mexico and his pledge to deport millions.

“It just keeps getting worse and worse in terms of unaccompanied children, separated families, detention centers that are just horrific, and so what we wanted to say as a church body, as the Lutheran church, we wanted to now act with our feet and take action,” said Evelyn Soto Straw, director of unit operations and programs for the ELCA’s Domestic Mission.

More than 570 voting members of the churchwide assembly signed up to participate in the prayer vigil at the ICE building. They were joined by staff from the ELCA and its AMMPARO (Accompanying Migrant Minors with Protection, Advocacy, Representation and Opportunities)  ministry, as well as members of the Greater Milwaukee Synod, the New Sanctuary Movement and Voces de la Frontera, a local grassroots organization.

The group marched nearly a mile from the Wisconsin Center to the ICE building, carrying signs with messages like “We put the protest back in Protestant” and chanting “This is what the love of God looks like.”

There, Bishop Paul Erickson of the Greater Milwaukee Synod opened the vigil in prayer to “Jesus Christ, immigrant and savior.”

“Marching is fun, words are great, but action makes a difference,” Erickson told the crowd gathered in the street.

The Rev. Erin Clausen of the Metropolitan Chicago Synod said she joined the vigil as a pastor, a mother and a spouse. Christians are supposed to bring the good news to everyone — “especially to those who are hurting and fearful,” Clausen said.

She thinks of the children separated from their families and of what she would want others to do if that were her child, and her heart breaks, she said.

Clausen marched alongside Iván Pérez, who is lead organizer and trainer on the Metropolitan Chicago Synod’s Antiracism Team.

Pérez, who is Puerto Rican, said his faith gives him boldness to speak out in support of immigrants.

He was “very happy and proud” of the ELCA after the vigil, he said as he marched back to the Wisconsin Center with the group. 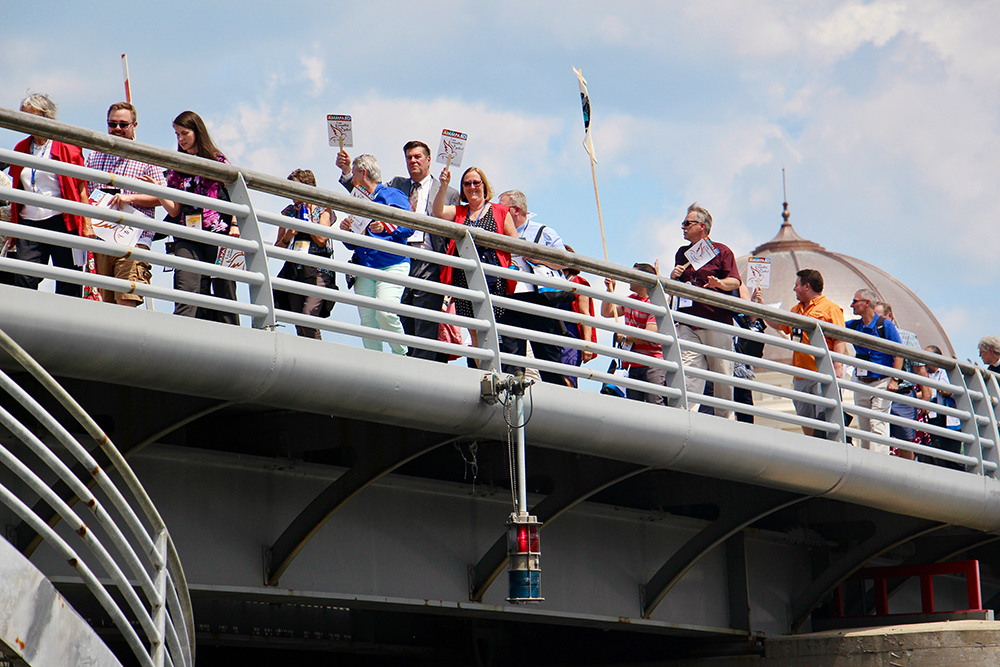 Hundreds of attendees at the ELCA Churchwide Assembly march to the ICE building in Milwaukee for a prayer vigil in support of migrant children and their families on Aug. 7, 2019. Photo: Emily McFarlan Miller/RNS

The ELCA Churchwide Assembly — the primary decision-making body of the ELCA — meets through Saturday.

With more than 3.3 million baptized members, the ELCA is one of the largest Protestant Christian denominations in the United States. Its churchwide assembly includes 927 voting members from more than 9,100 congregations across the U.S. and the Caribbean.

The assembly is considering several immigration-related resolutions this week.

On Wednesday afternoon, after the lunchtime vigil, it passed a resolution declaring the ELCA a “sanctuary church body.” That term was proposed by Christopher Vergara, a voting member from the Metro New York Synod.

“We continue to do God’s work with our hands in language the world understands,” Vergara said.

Other measures approved so far this week by the assembly include a resolution recommitting to “being an advocate and justice seeker for immigrants,” advocating for Temporary Protected Status extensions and reaffirming its work with AMMPARO and Lutheran Immigration and Refugee Service to call for immigration policies and practices that keep families together.

Another resolution, calling on congregations, synods and other church organizations to speak out against the “inhumane policies of harassment, detention and deportation implemented by the U.S. government,” also passed.

Next, the assembly will consider a resolution requesting ELCA staff develop a plan for additional tools providing education and discernment “specifically directed to political rhetoric and the accurate portrayal of migrants and refugees.”