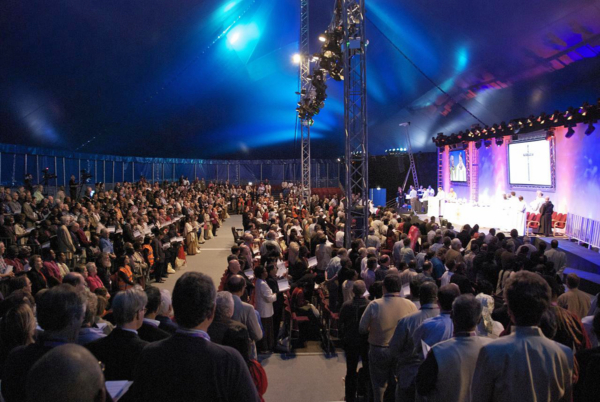 The congregation, made up mostly of bishops and their spouses, gathered for Eucharist on July 17, 2008, under what was known as “The Big Top” tent at the University of Kent. Photo: Scott Gunn/Anglican Communion News Service

[Episcopal News Service] Archbishop of Canterbury Justin Welby’s decision to exclude the same-sex spouses of bishops invited to the 2020 Lambeth Conference has drawn concern in the British Parliament and from students at the university where the bulk of the events will be held.

Both The Episcopal Church’s Executive Council and House of Bishops, as well as a number of dioceses, have gone on record objecting to the decision announced Feb. 15 in an Anglican Communion News Service blog by Anglican Communion Secretary General Josiah Idowu-Fearon.

Idowu-Fearon wrote that Welby had invited “every active bishop” to the periodic gathering of the Anglican Communion’s bishops set for July 23-Aug. 2, 2020. That decision represents a change from the previous Lambeth Conference. In 2008, then-Archbishop of Canterbury Rowan Williams refused to invite Bishop Gene Robinson, who in 2003 became the first openly gay and partnered bishop in the Anglican Communion.

However, Idowu-Fearon said in his blog post that “it would be inappropriate for same-sex spouses to be invited to the conference.” He said the Anglican Communion defines marriage as “the lifelong union of a man and a woman,” as codified in Resolution 1.10 of the 1998 Lambeth Conference. 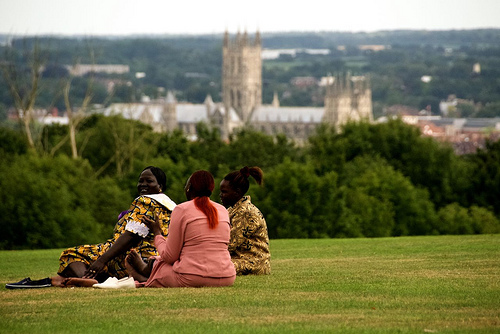 Some spouses enjoy the day on July 22, 2008, during the last Lambeth Conference, with Canterbury Cathedral in the background. Photo: Scott Gunn/Anglican Communion News Service

As noted in the 2004 Windsor Report (page 61 here), the decisions of Lambeth Conferences do not carry the force of canonical law in part because there is no single set of canons applicable across the entire communion. The report, issued in the wake of Robinson’s ordination and consecration, said that Lambeth resolutions “have moral authority across the Communion,” and consequently, provinces “should not proceed with controversial developments in the face of teaching to the contrary from all the bishops gathered together in Lambeth Conferences.”

The Lambeth Conference, which happens roughly every 10 years, has its roots in a controversy over the teachings of John William Colenso, the bishop of Natal in Southern Africa, and those who thought he was advocating polygamy and defying other accepted theological teaching. Then-Archbishop of Canterbury Charles Longley invited all 144 of the communion’s bishops to the first conference in 1867, but only 76 attended, in part because some felt the gathering would only increase confusion about the controversy, according to an 1889 book. 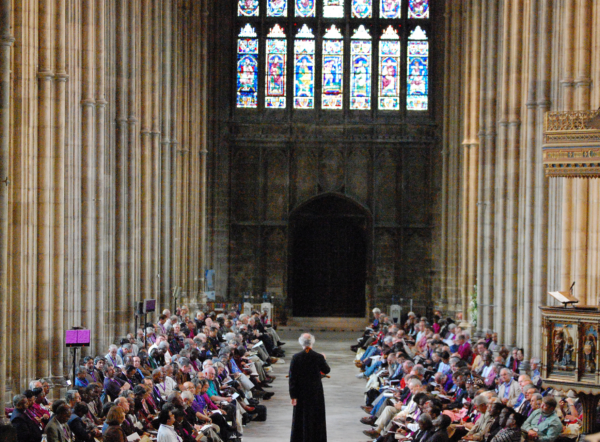 The 2020 conference is due to begin with two days of “spiritual retreat” on July 23 and 24, with bishops and spouses gathering separately. An opening Eucharist is set for July 26 at Canterbury Cathedral. The conference website says that, from July 27 to Aug. 1, participants “will work through a daily program which includes Bible studies based on 1 Peter, special guests and keynote speakers, seminars, plenary sessions and discussions.”

Spouses have typically participated in a parallel program. However, in 2020, there will be a joint program for the first time. Spouses of bishops will attend combined sessions “at key points in the overall program,” according to information here. There will also be separate sessions on the specific responsibilities of the ministry for bishops and spouses, according to the Lambeth website. The conference’s website features a photo of Welby and his wife, Caroline. The page was changed to add a link to Idowu-Fearon’s blog. It read, “The Archbishop of Canterbury, Justin Welby, is sending personal invitations to every eligible bishop and spouse (excluding same-sex spouses) and is looking forward immensely to hosting them.” The landing page now refers to Welby’s invitations to “every eligible bishop and spouse.”

A question in Parliament

Ben Bradshaw, a Labour Party member from Exeter, raised a point of order in Parliament on March 14, asking for a statement from Second Church Estates Commissioner Dame Caroline Spelman “on the outrageous decision by the Church of England to issue the official invitation to next year’s Lambeth Conference and explicitly forbid the same-sex spouses of bishops from attending, when the heterosexual spouses of bishops have been warmly invited.”

Bradshaw said the exclusion of same-sex spouses is “a totally unacceptable position for our established state church to adopt, and this house needs to tell the church we have had enough of it.”

Andrea Leadsom, a Conservative Party member who is lord president of the Privy Council and leader of the House of Commons, replied that she was “not aware of that situation” and was grateful to Bradshaw for raising it. She invited him to write to her so that she could raise the question with Spelman.

The @churchofengland decision to explicitly ban the same sex spouses of Anglican Bishops from next year’s Lambeth Conference, when heterosexual spouses are warmly invited, is totally unacceptable behaviour for an established Church which still enjoys the privileges of such. pic.twitter.com/PnxYyr7zU5

Bradshaw was not accurate in his statement that the Church of England issues the invitations for the gathering. The invitations come directly from the archbishop of Canterbury who has a number of communion-wide roles beyond his duties at Canterbury.

Bradshaw had been vocal about Welby’s decision before raising his question in Parliament.

When I first saw this I thought it must be a spoof. The invitation to next year’s @churchofengland #Lambethconference to “address hurts & concerns” specifically stating that the same sex spouses of Bishops are not welcome. Ashamed of my Church. @churchstate pic.twitter.com/W6hj4YlcIZ

The University of Kent, a public university, said in mid-March that it had agreed in August 2018 to allow the Lambeth Conference in 2020 to convene on its campus on a hill above the main part of Canterbury. It has done so since 1978. The gathering tends to happen roughly every 10 years. The last meeting took place in 2008.

The university said, in what appears to be a letter written to someone who inquired about the decision, that it had learned of Welby’s decision via Idowu-Fearon’s blog post.

However, the letter goes on to say that the Lambeth Conference is relying on an exemption for religious organizations, which is part of the British Equality Act of 2010. “While we would not apply such a prohibition to any event that we are running directly, we have to respect clients’ rights provided they are lawful and justifiable should they wish to exercise a legal right which is open to them,” the university’s letter said. 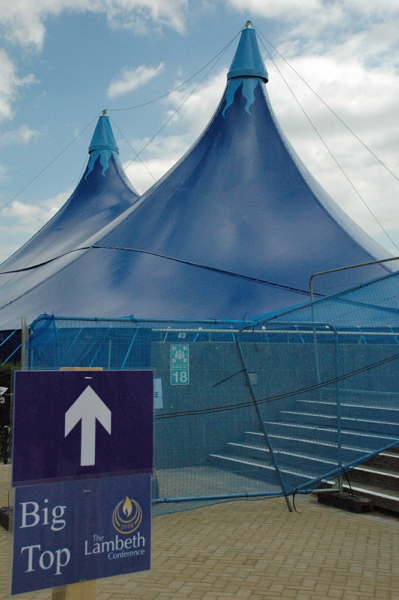 “The Big Top” was pitched on the University of Kent campus and was the site of most of the session for the last Lambeth Conference, which ran July 16-Aug. 4, 2008. Photo: Mary Frances Schjonberg/Episcopal News Service

An article in the local newspaper quoted one student calling the university’s response “spineless” and another who accused the school of putting the chance to make money above its values. The conference costs £4,950 (about $6,450) per person, which includes accommodation, meals at the venue and all travel during the conference itself. The price doesn’t include flights to or from the United Kingdom.

The conference is run by an organization related to the Anglican Communion Office known as the Lambeth Conference Co. Phil George, the chief executive officer, told the Anglican Consultative Council’s Standing Committee last September that “progress continues to be positive and financially we are on track.” Soon after the 2008 gathering, it was reported that the event, which cost £5 million (roughly $9.9 million in 2008), was £1.2 million (or about $2.4 million in 2008) in debt. The Telegraph said that organizers had to ask the Board of Governors of the Church Commissioners and the Archbishops’ Council of the Church of England to cover the deficit.

The Student Union at the University of Kent said March 21 that it is “deeply disappointed” in the school’s decision to contract with conference organizers. “This is not a value that we expect to see on campus, and we are committed to championing inclusivity in all events,” the group said in a statement. The students said outside events held at the university ought to “respect the diversity of both students and staff, the values of the University, Kent Union and the environment that they want to utilize.” The statement said the group would be in contact with conference organizers, “where our efforts need to be focused, urging them to change their stance.”

Five days later, David Warren, chair of the University Council, said that the school had received “a large number of concerns.” He reported that council members decided that the university “shall ensure that accommodation will be available on campus for those spouses affected by this decision who wish to be in Canterbury with their partners during the conference period.”

Warren said he and Karen Cox, University of Kent vice-chancellor and president, would try to meet with the Lambeth Conference organizers and Welby “to bring council’s concerns to their attention and discuss the issues.”

The British organization OneBodyOneFaith said in mid-February that its members and supporters were hoping to offer accommodation for same-sex spouses. “We will do everything we can to ensure that they are there in Canterbury next year,” said Tracey Byrne, OneBodyOneFaith chief executive.

Byrne and the Rev. Peter Leonard have also written to Welby, Idowu-Fearon and others to express their concern. “We trust that you will continue to reflect on the harm which has been done by this decision and the way in which it has communicated, and like us will be open to the possibilities of transforming that hurt and harm, even at this stage, by courageous words and compassionate action,” they said. “We intend to do just that, starting with our commitment to host those un-invited spouses so they can experience the warm and generous welcome which we believe characterizes the Church of England at its grass roots. This seems to us to be the very least the gospel demands of us.”

The Anglican Consultative Council is due to discuss the conference on May 4, the last formal business day of its April 28-May 5 meeting in Hong Kong.