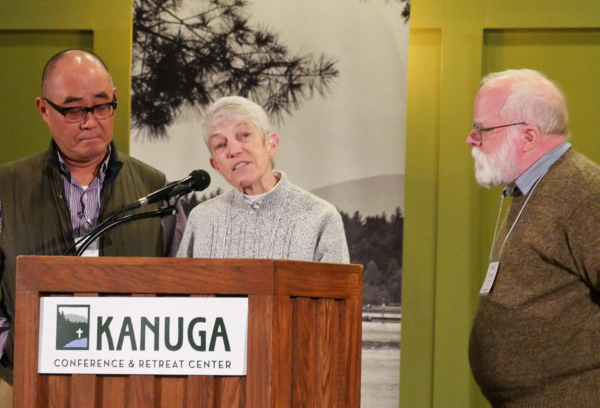 [Episcopal News Service – Hendersonville, North Carolina] The Episcopal Church’s House of Bishops spent time on March 14 in both open and closed sessions considering how to respond to the decision to exclude same-sex spouses from the 2020 Lambeth Conference of bishops.

“We are not avoiding it. We are being prayerful, thoughtful, strategic about what is the loving action for us,” Presiding Bishop Michael Curry told Episcopal News Service after the closed session ended. “We, as a house, are now thinking and considering what are the creative possibilities and loving ways that we can bear witness to the Way of Love that we are committed to as the way of following Jesus.”

Diocese of New York Bishop Assistant Mary Glasspool addressed the house in open session to begin the day, with New York Bishop Andrew Dietsche and New York Bishop Suffragan Allen Shin at her side. She is The Episcopal Church’s only actively serving bishop who has a same-sex spouse. Glasspool asked for her colleagues’ continued support, while also urging them to listen to their spouses and to consider what it would mean if “we are not at the table to bear witness” to the love of Christ that “lives and bears fruit in the lives of married LGBT people.”

Before he closed the house, Curry asked the bishops to enter “the vision that Mary [Glasspool] has invited us into” with two questions that she had just posed to them: How will they continue to be a “hospitable house” and welcome new bishops with same-sex spouses? And, what is the best and most creative way to bear witness to God’s love and justice at Lambeth?

He invoked theologian Paul Tillich’s idea that there is a “creative and saving possibility in every situation.”

Curry asked the bishops to consider how to employ Tillich’s concept in finding ways to “witness to the communion that we love and that we are a part of, and on behalf of our sisters and brothers whom we love. What are those creative and saving possibilities that reflect the Way of Love, even though it is hard?”

Curry suggested that they consider forming a small group of bishops and spouses to generate some ideas before the house’s Sept. 17-20 meeting. The bishops and spouses will meet together in September. Spouses do not normally attend the spring meeting. 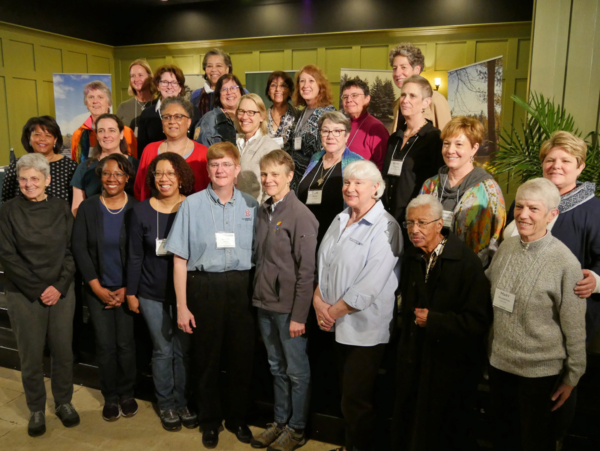 Diocese of New York Bishop Assistant Mary Glasspool, front row right, joins in a group photo of all the women bishops and bishops-elect who are present for the March 12-15 meeting at Kanuga Conference and Retreat Center. Photo: Mary Frances Schjonberg/Episcopal News Service

Glasspool was elected bishop suffragan of Los Angeles on Dec. 4, 2009, and was consecrated on May 15, 2010, along with Bishop Suffragan Diane Jardine Bruce who was elected by the same convention. At the time, she was the 17th woman to be elected a bishop in The Episcopal Church, and still is the first openly lesbian bishop in the Anglican Communion. She is married to Becki Sander, her partner of more than 30 years. She has been bishop assistant in the Diocese of New York since April 2016.

Glasspool spoke to the bishops for about 15 minutes, recounting how “within hours” of her election then-Archbishop of Canterbury Rowan Williams issued a statement that was interpreted as a call to the diocesan standing committees of The Episcopal Church and its bishops with jurisdiction to withhold their consent to Glasspool’s ordination and consecration. (Canon III.11.3, beginning on page 164 here, requires such consent after all bishop elections.)

Two years ago, Williams, who retired from Canterbury in 2012, was in New York for Holy Week and was invited to be part of the traditional clergy Renewal of Vows service on Holy Tuesday at the Cathedral Church of St. John the Divine. Glasspool said she was anxious about encountering him, and she did in the crowded sacristy. Williams, according to Glasspool, said, “Bishop Mary, we got off to a rocky start, and I’m sorry. I hope you will forgive me and we can begin anew.”

“I stammered out, ‘Of course. I understand. Thank you.’ For me, this brief exchange was the holiest of gifts, a true balm in Gilead,” Glasspool said.

She also recounted a gathering, sponsored by Trinity Wall Street in September 2018 to give current Archbishop of Canterbury Justin Welby the opportunity to promote Lambeth, during which he went “out of his way to engage and befriend” her wife. Glasspool said that the archbishop and Sander had a “friendly and lengthy conversation” about their shared “passion for social work.” Welby, Glasspool said, gave Sander his card with his personal email address, and invited her to be in touch.

Thus, she said, she was shocked by a letter from Welby on Dec. 4, 2018, telling her that Sander was not invited to Lambeth. Sander was “shocked, hurt and enraged.” They each replied by letter to Welby, and she said, they had hoped that news about Welby’s decision would not become public until this House of Bishops meeting.

However, on Feb. 15, Anglican Communion Secretary General Josiah Idowu-Fearon wrote in an Anglican Communion News Service blog that “it would be inappropriate for same-sex spouses to be invited to the conference.” He said the Anglican Communion defines marriage as “the lifelong union of a man and a woman,” as codified in Resolution 1.10 of the 1998 Lambeth Conference.

In the midst of the publicity that the blog generated, it “became startlingly clear that this was a political issue” that went beyond her and Sander, and the two other affected couples, Glasspool said. 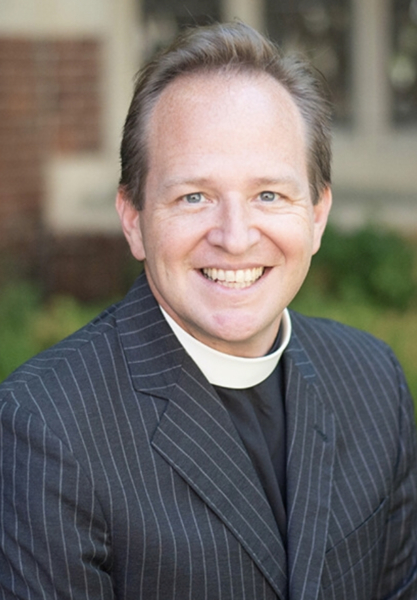 The Rev. Thomas Brown is due to be ordained and consecrated on June 22 as the next bishop of the Diocese of Maine. He is married to the Rev. Thomas Mousin. The diocese elected Brown on Feb. 9. The consent process is underway. 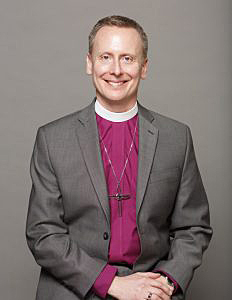 Robertson recently told ENS that Welby informed him in person in early February that Sharma would not be invited. Robertson and Sharma are the parents of two young children.

It is possible that Episcopal Church dioceses will elect bishops with same-sex spouses between now and the July 23, 2020, beginning of the Lambeth Conference.

Glasspool asked her colleagues in the house to consider that “spouses are autonomous people – they are not simply extensions of the bishops to whom they are married” and ought to be able to make their own decisions about Lambeth. Glasspool said she hoped that the House of Bishops would not try to speak for them but instead would “listen to their voices, individually, and to whatever degree they can speak collectively, as a group.”

“Second, I really believe that it is better to be at the table when you’re on the menu,” she said. “How will people come to see and know the love of Christ as it lives and bears fruit in the lives of married LGBT people if we are not at the table to bear witness to that love?”

As Glasspool began to make a third point, her voice caught. “I want my own life to be centered in the life, ministry, death and Resurrection of Jesus Christ, and I dare say you do, too. It is so easy, and at times very tempting, for me at least, to be drawn away from that center. So I’m asking for your help to stay centered,” she said. “I’m keenly aware that the Way of Love is also the Way of the Cross. You all know this, too. The sacrificial aspect of Jesus’ love for us is also the most precious, and for that, and for all of you, I am eternally grateful.”

The House of Bishops is overwhelmingly a married house. Of 160 bishops who are active, full- or part-time, in a diocese or institution, only 16 are single, according to Bishop Todd Ousley, who oversees the church’s Office of Pastoral Development.

The bishops gave Glasspool a prolonged standing ovation. Before the closed session began, Curry told her that “the spirit of God that was upon Martin [Luther] King [Jr.] is upon you now.”

The Episcopal Church’s Executive Council on Feb. 24 asked the bishops and their spouses, and the House of Bishops collectively, “to prayerfully and carefully consider her/his/their response, choices and actions” in the light of what it calls the “troubling circumstances” of the decision to exclude same-sex spouses from the Lambeth Conference. Council unanimously approved a resolution that said it found the decision “inconsistent” with the positions of The Episcopal Church and with multiple statements of Anglican Communion entities that have urged the church to listen to the experiences LGBTQ persons.

An outward and visible sign of support by some bishops 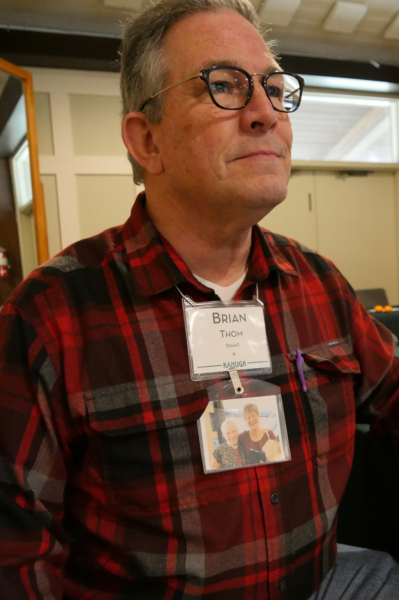 Diocese of Idaho Bishop Brian Thom says he decided to attach a photo of Diocese of New York Bishop Assistant Mary Glasspool and her wife Becki Sander to his name badge as an “expression of love” for them and for all of the bishops’ spouses. Photo: Mary Frances Schjonberg/Episcopal News Service

From the beginning of the meeting, Diocese of Idaho Bishop Brian Thom has worn a photo of Glasspool and Sander on his name badge. It is an “expression of love” for them and appreciation for all bishops’ spouses, he told ENS.

Thom said other bishops have asked him about the photo that hangs below his name badge. Some have asked him for one to wear as well, while “others have observed them and thanked me for them,” but not asked for a copy, he said.

He told ENS that he downloaded the photo from the web and did not tell Glasspool beforehand what he was doing. As it happened, she was the first person he encountered when he first wore his name badge. She responded with a big hug, he said, and then took a photo of it to send to Sander.

“I know how much my spouse contributes to my ministry, makes it possible,” Thom said of his wife, Ardele. “It’s hard for me to imagine an invitation that does not include both partners.

“Every bishop here would say that they could not do what they do without their spouses in some way.”

Thom said, “The Anglican Communion is working out its conflict on the back of persons not responsible for the conflict.”

About the meeting’s agenda

They will close their time at Kanuga with a business meeting the afternoon of March 15.