[Diocese of Kansas] The Rt. Rev. Cathleen Chittenden Bascom was ordained and consecrated as the 10th bishop of the Episcopal Diocese of Kansas on March 2 at Grace Cathedral in Topeka in a service marked with history, as she became the first woman bishop in the diocese’s 160-year history. The 1,112th bishop of the Episcopal Church, she also was the first diocesan bishop ever to be elected from a slate of candidates who all were women. 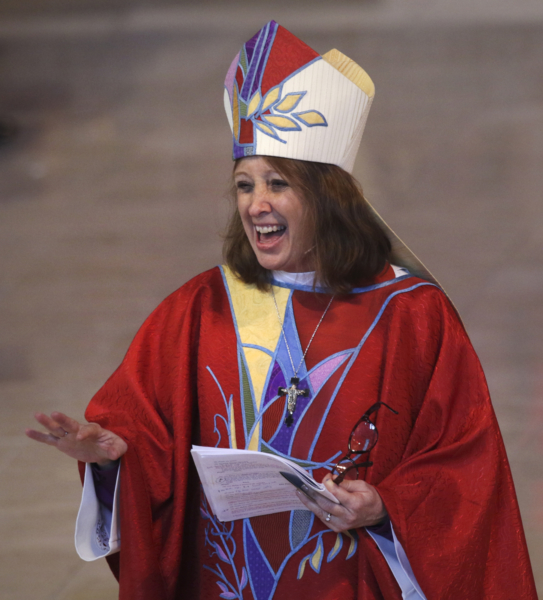 Presiding Bishop and Primate Michael B. Curry led the service as chief consecrator. The Rt. Rev. Alan Scarfe, bishop of the Episcopal Diocese of Iowa, was the preacher. Bascom most recently had served for 17 years in Iowa.

The service also included her seating in the cathedra, or bishop’s chair, that is symbolic of the bishop’s office.

Music included bagpipers, a folk band and a choir made up of singers from eight churches in the diocese and surrounding areas.

The consecration service can be viewed on the diocesan YouTube channel.

Bascom was elected 10th bishop of the Episcopal Diocese of Kansas on Oct. 19, 2018, on the second ballot. Prior to the election she was assistant professor of religion at Waldorf College in Forest City, Iowa, and also served as supply priest and team coach at Trinity, Emmetsburg. Before that she had served as dean of St. Paul’s Cathedral in Des Moines, Iowa, for 13 years.

Her election was a homecoming of sorts for Bascom, having served eight years in the diocese, leading campus ministry at Kansas State University in Manhattan from 1993 to 2001.

She received a Master of Divinity degree from Seabury-Western Seminary in 1990. She also holds a Doctor of Ministry degree in preaching from Iliff School of Theology in Denver, a Master of Arts degree in Modern Literature from Exeter University in England, and a Master of Fine Arts in creative writing and environment from Iowa State University.

She is married to Tim Bascom, a writer and professor. They have two sons, Conrad, 25, and Luke, 21.

The ninth bishop of the diocese, the Rt. Rev. Dean E. Wolfe, resigned in January 2017 to become rector of St. Bartholomew’s Church in New York. Since then, the Council of Trustees, acting in its capacity as the Standing Committee, has been the diocese’s Ecclesiastical Authority. The Rt. Rev. Michael Milliken, now retired as Western Kansas diocesan bishop, served as assisting bishop in the Diocese of Kansas for most of the time between diocesan bishops there.

The Episcopal Diocese of Kansas has more than 10,000 baptized members in 44 congregations. The diocese covers the eastern 40 percent of the state of Kansas, extending as far west as Abilene and Wichita. It also includes the cities of Topeka, Lawrence and Manhattan and the entire Kansas City metropolitan area on the Kansas side of the state line.