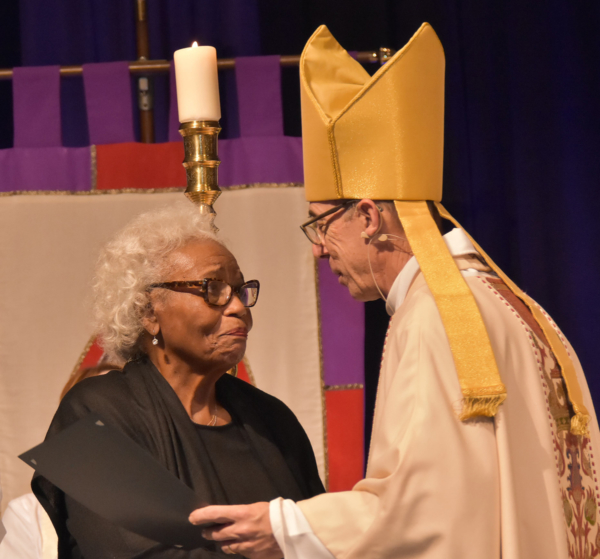 Mississippi Bishop Brian Seage presents Anita Parrott George with a certificate designating her as an honorary canon of the Cathedral Church of St. Andrew in Jackson. Photo: Jeanie Munn.

She was elected to serve as a deputy to General Convention seven times, and was involved in much of the church’s anti-racism work. George also served two terms on the Executive Council of The Episcopal Church.

All of George’s work is grounded in an effort to live her Christian confession of faith in a culture in which racism’s deep roots affected her life and the lives of all people of color. Halting racism’s societal and individual wounds became a life’s work through education.

In a recent reflection, George wrote that much progress has been made. “Yes, we have been busy with efforts toward racial reconciliation and eliminating racism, and much has changed, many have been transformed. Yet, glaring statistics point to alarming trends, suggestive of the resurgence of our troubled racial past. … We must go beyond the very necessary outer work of training and enactment of laws and programs to the solitude of our inner work of formation, transformation, and re-formation,” she wrote.

The work that George has done in The Episcopal Church and beyond has helped pave the way for the necessary interior work of soul-searching to be accomplished. Her efforts to present racial reconciliation events throughout the nation are all couched in the understanding that the elimination of racism can only be reached when the work begins in a journey within.

Family and friends from throughout the diocese and the nation were present at the council’s closing Eucharist. Tears of joy were shed by many during the presentation, which included a video greeting from Presiding Bishop Michael Curry.

“We celebrate the life’s work of Dr. Anita George in appreciation of her faith and devotion to help make Christ’s work of reconciliation be felt more deeply in this world. Anita, your ministry is a blessing to us all.” said the Rt. Rev. Brian Seage, bishop of Mississippi.