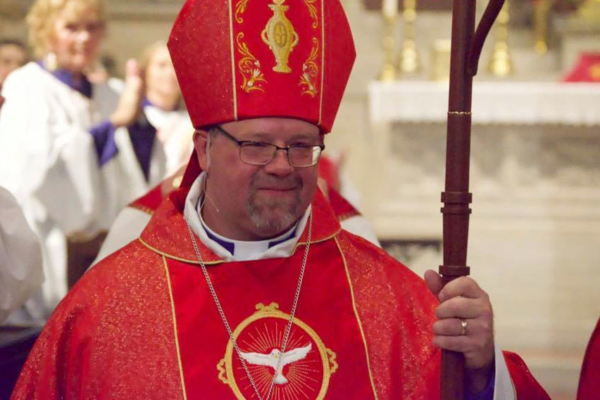 [Episcopal News Service] Western Kansas Bishop Mark Cowell had not yet been ordained a full month when he made his first official visit to a congregation in the diocese that he was newly entrusted to lead. St. Mary & St. Martha of Bethany Episcopal Church in Larned, Kansas, was an easy choice to kick off a rotation of first-Sunday visits to congregations in the rural, sparsely populated western half of the state.

In a unique twist found only in the Diocese of Western Kansas, Cowell “visited” his own congregation. Cowell was vicar of St. Mary & St. Martha when he was elected bishop on May 5, and he remained in both roles for his Christmas Eve visit.

A bishop who also serves as parish priest? That’s just how they do it in Western Kansas, and Cowell’s multitasking doesn’t end there. He also leads a second congregation, Holy Nativity Episcopal Church in Kinsley, and his list of additional part-time jobs includes municipal prosecutor in Dodge City and county attorney for Hodgeman County.

Part-time bishops aren’t unusual, but Cowell is thought to be the only dual-role bishop who also serves a congregation. His predecessor, Bishop Mike Milliken, also served a parish for most of his episcopacy. There are no other bishops currently dividing their time in the same way, according to Bishop Todd Ousley, who assists dioceses with bishop searches as head of the Episcopal Church’s Office of Pastoral Development.

Milliken told ENS he often was asked how he divided his time between bishop duties and his rector role at Grace Church in Hutchinson, whether he devoted his mornings to one and his afternoons to the other.

“It really doesn’t work that way. It’s more like having children,” he said. “You deal with the one who needs your attention at that point, realizing that it takes some organizational skills and some planning and keeping a handle on your calendar.”

It helps that everyone in Western Kansas chips in and looks out for each other. Being bishop is “not a Lone Ranger type of show,” Milliken said. “It takes a lot of people working together on this.”

The diocese has fewer than 30 congregations, some of which only worship together once a month, and though Cowell has plenty of work to do, administrative tasks aren’t high on his list of priorities. “This is not a diocese where you need to spend a lot of time in the office,” Cowell said, and he enjoys meeting with local parishioners, whether he’s on an official visit or just stopping by to say hello and to help out.

“Quite frankly, we don’t do anything that formally out here,” Cowell said. “It gives me an opportunity to see my friends who happen to be going to church at all these different churches.” 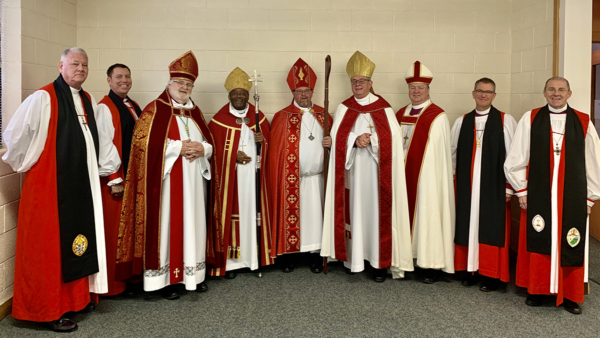 Rethinking the role of bishop

Financial constraints and the limited number of priests in Western Kansas are among the reasons the diocese has opted for a part-time bishop who shares congregational duties. Though it may be the only diocese with that arrangement, it isn’t the only one responding to such challenges by rethinking the role of the bishop.

The Diocese of Vermont is in the middle of its search to replace outgoing Bishop Thomas Ely, and its Bishop Discernment and Nominating Committee chose to seek candidates interested in approaching the role from a “bishop in partnership” perspective. That doesn’t mean the new bishop will be taking on congregational roles, but the diocese emphasizes collaboration.

“We seek a bishop who will partner with Episcopalians in Vermont to recognize, affirm, and raise up mutual ministry models in our congregations and in our larger diocesan life, as all ministry springs from the common call of our baptism,” the candidate profile says.

Diocese of Eastern Oregon Bishop Patrick Bell has maintained a primary residence in Idaho, outside the diocese, since he became bishop in 2016. He commutes to Eastern Oregon, spending most of his time as bishop traveling the diocese to visit congregations. His position is part time, as it was for his predecessor, Bishop Nedi Rivera.

Bishop Jay Lambert also serves part time in the Diocese of Eau Claire, which covers the less-populated northwest third of Wisconsin. In an email to ENS, Lambert called himself and Bell unique in that they became diocesan bishops after retiring as priests.

In other dioceses, bishops’ decisions to take on additional roles could be described as situational. North Dakota Bishop Michael Smith assumed leadership of Gethsemane Cathedral in Fargo in 2011 when the cathedral’s dean stepped down. Gethsemane is now led by the Very Rev. Mark Strobel, who was installed in 2015.

Northern Michigan Bishop Rayford Ray, though not a dual-role bishop, worked with some of the congregations in his diocese as a ministry developer for the first two years of his episcopacy, beginning in 2011. He has since overseen the development of mission support teams in congregations across the diocese, freeing him to focus on his core bishop duties full time.

Life ‘a little closer to the surface’ in Western Kansas

Western Kansas, in addition to resembling some of the other smaller dioceses in membership, is located in a region that has a way of life that sets it apart even from the lifestyle of its fellow Kansas diocese on the more-populated eastern half of the state, Cowell said, and that local culture helps makes a dual-role bishop possible.

“You have a great sense of community in the small towns,” Cowell said. “Everyone takes care of each other.”

He clarified that residents in his diocese don’t idly stick their noses in other people’s business, but they share the challenges and potential danger that come from unpredictable weather, manual labor on farms and ranches and the great distances between points of civilization. “There are certain realities of life that are just a little closer to the surface,” Cowell said.

Cowell was born in Washington, D.C., and later lived in Virginia, Pennsylvania and eventually New Jersey, where he graduated from high school and then college. He attended law school in New York City but soon decided the metropolis was “too vertical” for him. He craved a wide-open life out West, inspired partly by pop culture depictions of the region, like in “Dances with Wolves.”

He and his first wife decided to move to her native Kansas, gravitating first to the cities and suburbs on the east side of the state. In 1995, he moved farther west to Dodge City, and he’s lived in that area ever since, working alternately as a prosecutor and defense attorney. Along the way, his first marriage ended, and he remarried, settling for good in Larned, about 60 miles east of Dodge City.

Cowell said he first felt called to the priesthood in college, at Drew University in Madison, New Jersey. Drew has a seminary and he sought advice from some of the seminary faculty.

“I said, ‘I think I’m called as a priest, but I don’t want to do that,’” Cowell recalled. Their advice was to continue on his path toward becoming a lawyer, and he could find other ways to serve God. That’s what he did, “but the call [to the priesthood] never went away.”

In Larned, he began pursuing that call directly and was ordained in 2003. As a parish priest, he served a number of churches in the diocese, including as part of a supply priest rotation at some of the smaller congregations. Only two church in the diocese have full-time priests, Christ Cathedral in Salina and Grace Church in Hutchinson.

“We don’t have in this area the resources to have full-time clergy, so we’ve bounced around and covered where we can,” Cowell said. He acknowledged full-time clergy in every town would be preferred, “but that’s not the way we’re getting things done at this point.”

The same goes for the bishop role. Cowell was on the diocese’s Standing Committee when the Diocese of Western Kansas was searching for someone to take over for Bishop James Adams, who stepped down in 2010. Cowell said he raised the idea of a dual-role bishop in conversation with then-Presiding Bishop Katharine Jefferts Schori, who told him it was a model that, though out of fashion, had precedent in the early church.

The diocese determined it was last tried 150 years earlier, in Philadelphia, so the Western Kansas Standing Committee agreed to give it a try again, ordaining Milliken as bishop while letting him keep his parish at Grace Church. Milliken stepped down as rector two years ago to focus on the transition to a new bishop. He still plans to assist Cowell as needed.

Western Kansas’ model certainly isn’t for every diocese – arguably, not most dioceses – but Cowell said he hopes that this example might offer lessons that other dioceses can apply to their own contexts. One, he suggested, is the importance of inspiring laypeople to play a greater role in the life and future of their congregations.

“I don’t think we could do what we’re doing any other way,” he said. “But I also think that’s what we should be doing, continuing to teach and empower the laity to take over our churches.”