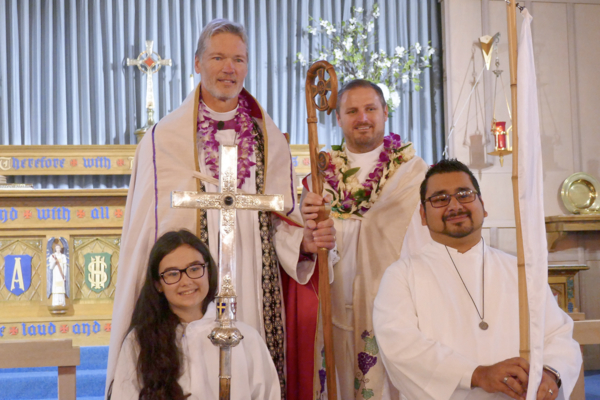 [Episcopal News Service] Diocese of San Joaquin Episcopalians gathered joyously Dec. 1 to welcome a new cathedral dean and to celebrate the first deacon ordinations at St. James Cathedral in Fresno, California, in at least a decade.

“We’re calling it a diocesan day of celebration,” San Joaquin Bishop David Rice said. “In the morning we installed the Rev. Ryan D. Newman as cathedral dean, and in the afternoon, we ordained four new deacons.

“That’s equally historic for this emerging diocese,” he said. “It’s a diaconate ordination in a place we haven’t had for 10 years, since the schism. And it’s historic that two of the deacons have come from our established school for deacons. This is the first group that has come through our own local process, and we’re delighted about that.” 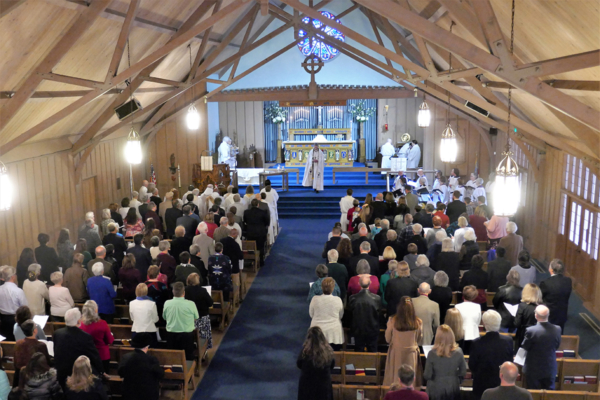 Episcopalians welcomed the Very Rev. Ryan Newman as the first dean of St. James Cathedral in Fresno in a decade on Dec. 1. Photo: Jeff March/Diocese of San Joaquin

In 2007, the former San Joaquin diocese broke away from the Episcopal Church over disagreements about the ordination of women and LGBTQ people, and same-gender blessings. Calling itself the Anglican Diocese of San Joaquin, the breakaway group attempted to keep the property, including the Fresno cathedral.

Newman, a Southern California native, said he felt an immediate connection to the passion and energy of Rice, especially “when he told me that the diocese needs someone who’s not afraid to get messy and who likes to rebuild things.”

Newman was the rector and headmaster of All Saints’ Church and School in Kaap’a, Kaua’i, in the Diocese of Hawaii, and had no thoughts of moving on – until San Joaquin Canon to the Ordinary Anna Carmichael called him.

“I was in a Seattle airport, waiting for a flight,” Newman recalled. “I was on my way to walk the Camino de Santiago de Compostela. Ironically, I was preparing to walk the way of St. James. I thought my Camino would end in Spain. Little did I know the journey would take me to St. James in Fresno.”

Newman, 42, hails from South Orange County in the Diocese of Los Angeles, and attended St. Margaret’s School in San Juan Capistrano. Ordained a priest in 2003, he served for 11 years as chaplain and director of operations at Campbell Hall a 1,000-student Episcopal school in North Hollywood, before moving to All Saints’, Kaua’i, a historic church he helped to regenerate.

Now, he hopes to parlay that experience to St. James Cathedral in Fresno.

“Bishop Rice wants to make it a place where it’s not just about worship on Sundays but about what happens between Sundays, about how we become the people of God and church in the world. It’s about getting out there and doing outreach and advocacy and community,” Newman told ENS.

Newman also dreams of transforming the cathedral into a center for the arts and education and an “embodiment of this resurrection in the diocese.”

‘Moments of resurrection with each passing day’

Rice counts the Dec. 1 ordinations among “the moments of resurrection” the diocese experiences daily.

“We started a school for deacons about three years ago, and that was a response to changing styles of formation and training,” he said. “We recognized the need for local formation and training in addition to those aspirants who choose to go to the Church Divinity School of the Pacific and other places.”

Greg Masztal was ordained Dec. 1 and said becoming a deacon caught him by surprise. “I joined the church 5½ years ago and I didn’t see this happening, … but I am willing to see where I am led,” he told ENS recently.

Currently, the full-time auditor serves the community of St. Paul’s, Modesto. “They’ve gone through a lot over the years, and now it’s a growing community,” Masztal said. “I hope to be a part of that and to encourage people, which is part of a deacon’s call.”

Masztal, 60, added: “It’s been a long journey. I feel like I’m already doing it. And these ordinations are part of a great celebration that is happening.”

Rice agreed. “We are a diocese that continues to experience moments of resurrection with each passing day.”

Concluding the court battles represents a significant shift in the diocesan landscape, which will “be different from most dioceses,” he said.

“We have concluded all of our litigations with the exception of one, a singular property, St. Columba’s in Fresno,” Rice said. “That case has been brought to the court, and we’re waiting to hear the results of that decision. We are finished after that.”

Additionally, the Executive Council of the Episcopal Church has forgiven $6.8 million in loans to the diocese “and that is a gift for which we continue to be exceedingly grateful,” Rice said. “It allows us to continue and to move and emerge in ways we wouldn’t be able to otherwise.” 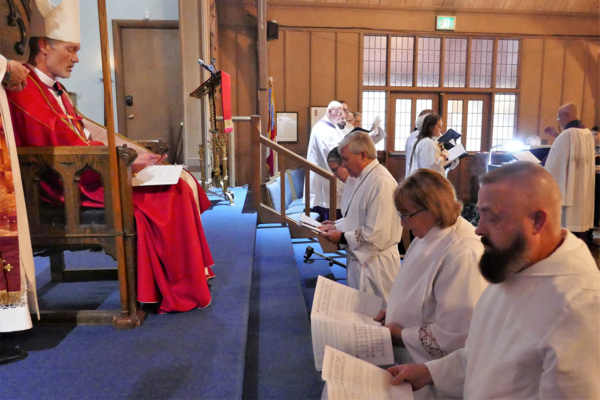 Despite challenges, the San Joaquin Diocese is “in good heart,” and Rice sees a seismic shift in the landscape.

There are numerous inquiries from across the church and around the country to fill upcoming vacancies from those wanting to experience the kind of “liturgical laboratory” represented by the rebuilding efforts.

Increasingly, new relationships are being forged, from the voices of the homeless to nonprofit organizations, ecumenical partners and academic institutions.

There are other shifts: “Rather than talking about average Sunday attendance, we are talking about AWE – average weekly engagement, an acronym coined by Canon to the Ordinary Anna Carmichael,” Rice said.

“It is a commentary on how we emerge and continue to emerge and the larger liturgical work of people has everything to do with those with whom we spend time and how we serve them each day.”

Rice cited as an example the number of feeding ministries in the diocese’s 21 worship communities. “What’s important about that is, the ministries have come about because our communities have engaged in conversations with people who live where they live, and they’ve heard expressions of ‘we don’t have food.’”

There is HUB – Helping Urban Cyclists – which serves homeless residents by providing bicycles for transportation. There is a warming center for the homeless of Visalia. And there is a diocesan immigration task force “engaged in really substantive conversations about refugees and our sisters and brothers who have that status and how we can be of assistance and a voice where sometimes they are voiceless,” Rice said.

“We believe the church has a clear mandate to be involved wherever people are marginalized or typically invisible.”

The diocese still “travels light,” with minimal staff – and there are challenges. “We are endeavoring to address the things we know don’t work,” Rice said. “We use holy candor all the time. We are looking for builders who are building relationships, who are entrepreneurial, who are not risk-averse. It’s hard work, given the landscape.”

Newman said that passion and energy and vision drew him back to California because Rice “is changing the metrics about vitality.”

“It’s not just about how many butts in the pews, but how you’re engaging community in meaningful and tangible ways,” Newman said. “It’s the only way that this diocese and the individual congregations will succeed long term and have sustainability.”