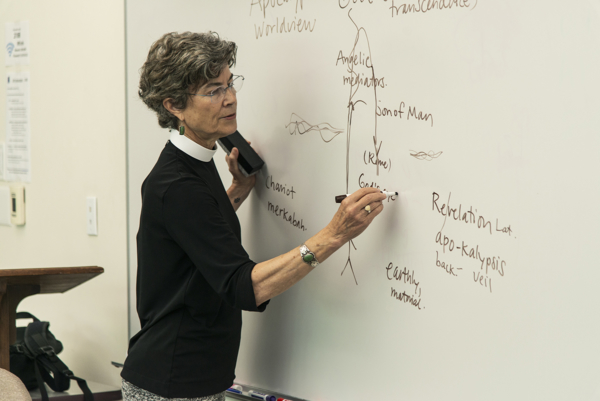 The Rev. Jane Patterson teaches during a class offered by the Iona Center at Seminary of the Southwest in Austin, Texas.

[Episcopal News Service] The Episcopal Church has an important partner as it responds to shifts in the religious landscape. In 2018, the Lilly Endowment Inc., a private philanthropic foundation based in Indianapolis, awarded nearly $4.5 million in grants to launch or strengthen programs that help pastoral leaders thrive in their ministry with congregations. And these grants are only the latest in a long history of support from the religion division of the foundation, whose mission is to deepen and enrich the religious lives of American Christians.

The endowment’s “willingness to pay attention to what is going on in pastoral leadership is helping us not only identify where the needs might be … but encourages organizations to experiment and find out what works,” said Scott Bader-Saye, acting dean and president of Seminary of the Southwest, located in Austin, Texas. “Lilly is doing a really fantastic job of priming these experiments in the context of mainline churches that are trying to figure out what the church might look like and what the world’s needs might look like in the future.”

The lion’s share of the grants to Episcopal entities came from an initiative at the Lilly Endowment called Thriving in Ministry. At the core of the initiative is a belief that strong, spiritually healthy pastoral leaders are integral to building and sustaining strong and healthy congregations. Thriving in Ministry grants support programs that are helping clergy develop mentoring relationships and peer groups, especially during times of transition or for those serving in particular contexts, said Judith Cebula, communications director of the Lilly Endowment. In 2018, the endowment made 78 Thriving in Ministry grants to religious organizations around the country, totaling nearly $70 million.

At Seminary of the Southwest, a grant of nearly $1 million will support bi-vocational priests and deacons – clergy who work primarily in secular jobs and who may or may not be paid for their ministry in local churches.

Typically, “bi-vocational priests do not receive the same level and amount of formation as those who attend a three-year residential seminary,” said Bader-Saye. With the support of the grant, the seminary’s Iona Collaborative will create cohort groups for bi-vocational clergy to pursue different tracks of continuing education, including preaching and spiritual formation and clinical pastoral education. Individuals will also have mentors during the program.

A theme of peer-to-peer learning and the importance of mentoring will undergird new work at the School of Theology at the University of the South in Sewanee, Tennessee. Building upon the seminary’s expertise in training of trainers, the seminary will use its nearly $1 million Lilly grant to develop mutual mentoring groups for clergy serving in rural communities, Latino/Hispanic ministry, historically African-American congregations, and those in nontraditional educational programs.

“I hope what we will create is a new network of people in each of these areas to get to know each other and depend upon each other,” said the Rt. Rev. Neil Alexander, dean of the School of Theology. “We want to explore together the question of how to adapt and change our current models of mentoring and formation that speak to the needs of the church, now and in the future.”

Alexander believes the cohort groups will create a symbiosis that can bear tremendous fruit.

“When you bring the wisdom of the current leaders and the wisdom of future leaders into the same room, the learning works both ways. The people who are being trained often have ideas that push the trainers. … It’s amazing what enrichment can come from that,” he said. “I’m a great believer that whether it’s the church or the larger society, when there are problems to be addressed, you have to invest in leadership.”

Virginia Theological Seminary is exploring how to strengthen leaders through three Lilly grants awarded in 2017 and 2018, totaling $2.75 million. The grants support two new initiatives: Baptized for Life and a Thriving in Ministry mentoring program, as well as a continuation of the project Deep Calls to Deep, which seeks to improve preaching through peer learning groups.

The seminary in Alexandria, Virginia, received $1.5 million from the Lilly Endowment for Baptized for Life: An Episcopal Discipleship Initiative. The focus of this program is on encouraging lay involvement and ownership in congregations. The program will work with 20 congregations that reflect the diversity of the Episcopal Church and develop formation resources that help individuals of all ages live into their baptismal vocation.

A nearly $1 million Thriving in Ministry grant will help priests who are at various transition points in their ministry, such as moving into church planting or female clergy who become senior rectors.

“Ministry can often be isolating,” said the Very Rev. Ian Markham, dean and president of VTS. “If you’re going to succeed, you need strategies outside the congregation to help. A primary one is training of mentors and peers because we know that our most effective learning comes from one another.”

As part of its ministry to “seed the field with the type of leaders the church needs,” the Episcopal Diocese of North Carolina will embody the principle of team learning and collaboration in its new initiative, Reimagining Curacies, said the Rt. Rev. Sam Rodman, bishop of the Diocese of North Carolina. Funded by a nearly $1 million grant, the program will create cohorts of three nearly ordained clergy who will serve as a team in three different contexts: rural, urban and multicultural. The cohorts will meet regularly with senior clergy, mentors and lay leaders.

At the end of three years, these new ordinands “will have been part of the leadership of three different faith communities, which will leave them better prepared for whatever the Holy Spirit is calling them to do next,” said Rodman. The hope is that “this sense of collegiality, partnering, and cross-pollination becomes integrated and embedded into their understanding of what church leadership looks like, so wherever they go, they are going to cultivate that model of leadership and are equipped to build this type of team,” he said.

While these large grants focus on institutional and structural change, the Lilly Endowment also awards grants to enhance and sustain the quality of ministry on local levels. These include the Lilly Endowment Clergy Renewal Program, which began in 1998, first in Indiana and then nationwide. 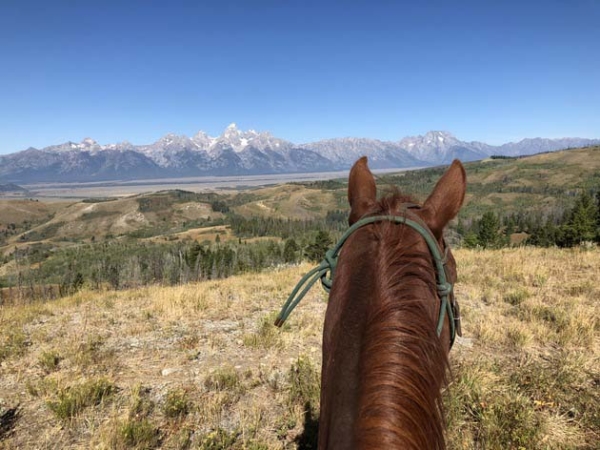 The Rev. Laurie Brock took in this view of the Grant Tetons while riding Maverick during a sabbatical trip.

The program provides “an opportunity for pastors to step away briefly from the persistent obligations of daily parish life and to engage in a period of renewal and reflection. Renewal periods are not vacations, but times for intentional exploration and reflection, for drinking again from God’s life-giving waters, for regaining enthusiasm and creativity for ministry.”

A number of Episcopal congregations and their clergy have received these grants, including the Episcopal Church of St. Michael the Archangel in Lexington, Kentucky, and its rector, the Rev. Laurie Brock. A 2017 grant included money for Brock to attend a course on women and the Bible at St. George’s College in Jerusalem and spend a week riding horses in the Grand Tetons in Wyoming.

“I was surprised at how vocationally exhausted I was, and being able to get away for sabbatical time allowed me not only to be physically away from the congregation, but spiritually and mentally away so I could refresh, rest and recharge,” said Brock. “My time in Israel was especially renewing, as I was able to be a student again with familiar biblical accounts of women who were matriarchs, apostles and prophets. Standing in the place they stood, listening to the sounds they may have heard, and breathing the air that held them renewed not only my priestly vocation but also my faith.”

The grant funded supply clergy for the congregation during Brock’s sabbatical, as well as a conference, Women in the Bible, that gave the congregation a parallel encounter to their priest’s.

“Being able to share our experiences as priest and congregation during sabbatical time and looking to how God is calling us to be disciples together as we begin this next portion of our journey has allowed us to weave the wisdom we both gained from sabbatical into our mutual story and be excited about what comes next,” Brock said. 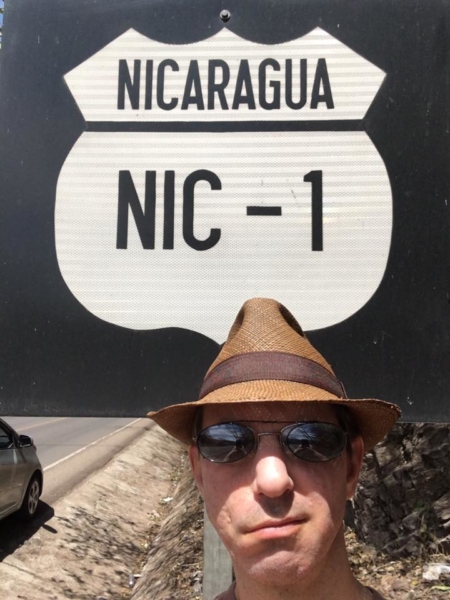 The Rev. Tim Schenck and the Episcopal Parish of St. John the Evangelist in Hingham, Massachusetts, also received a renewal grant in 2017. The question the grant application asks – What makes your soul sing? – is one “that often gets shoved aside while on the hamster wheel of parish ministry,” said Schenck. “And yet, as clergy, it’s vitally important to be in touch with that which inspires and delights our souls.”

Schenck focused his sabbatical on a theme of faith and coffee, traveling to coffee farms in Central America and to an Eastern Orthodox monastery in Pennsylvania where monks roast and market their own coffee. Although the grant doesn’t encourage participants to finish their sabbaticals with a product, Schenck wrote a book out of his experiences, titled “Holy Grounds: The Surprising Connection Between Coffee and Faith – From Dancing Goats to Satan’s Drink” (Fortress Press) that will be out in early spring of 2019.

After the sabbatical, “I remembered that I really do love the people I serve at St. John’s in Hingham,” Schenck said. “I mean, I’ve always been aware of this, but that old adage ‘absence makes the heart grow fonder’? Yup. Breaks are important as they offer perspective. … I expected personal renewal, but I didn’t expect this sense of renewal of love for my congregation. That both surprised and delighted me.”