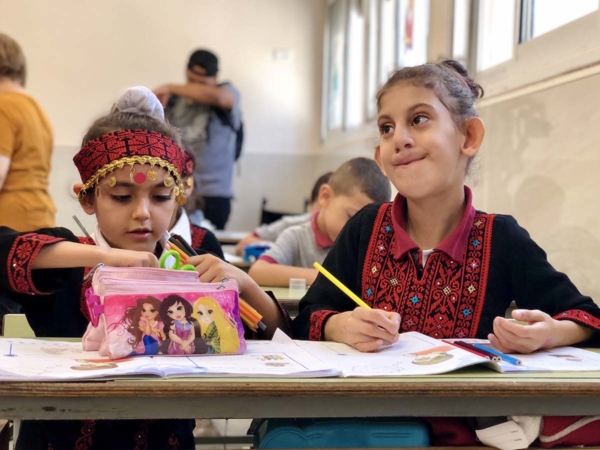 Many disabled students served by the Jerusalem Princess Basma Centre are mainstreamed into the inclusive school where on-site therapies are available to them. Photo: Heidi Shott

The boy’s parents were concerned because he wasn’t developing at the rate of his twin brother, so they brought him to Al Ahli Arab Hospital for treatment in a program that serves underweight and malnourished children, said Suhaila Tarazi, the hospital’s director, interpreting the father’s words for Beisner and other members of the American Friends of the Episcopal Diocese of Jerusalem, or AFEDJ, on Oct. 11.

After several months of treatment, the boy was thriving and catching up to his brother, the father said, via Tarazi’s interpreting. As Tarazi turned to lead the visitors down the hallway, the boy’s father caught Beisner’s eye, gestured toward a doctor, Dr. Maher Ayyad, and blew a kiss of gratitude. No translation necessary. 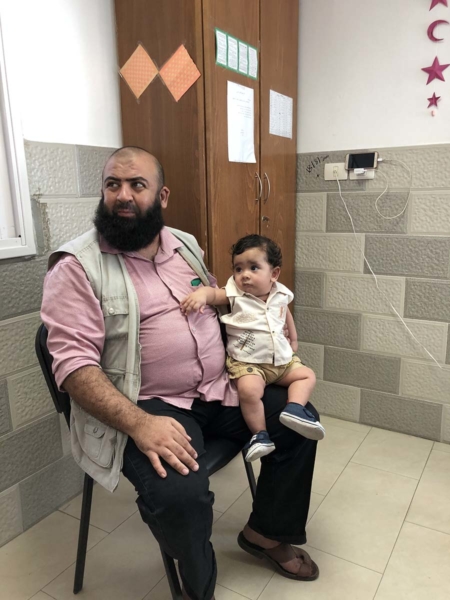 A Palestinian father holds his son, who has benefited from Ahli Hospital’s clinic for underweight and malnourished children. Photo: Barry Beisner

Al Ahli Arab Hospital, located in the Palestinian territory of Gaza, is one of 30 social service ministries owned and operated by the Episcopal Diocese of Jerusalem. Although Gaza’s Christian population has dwindled to around 900, the hospital is busier than ever. As the only charitable hospital in Gaza City, Ahli Hospital provides medical care with Christian witness to any of Gaza’s 1.9 million residents, regardless of ethnicity or religion.

Members of the AFEDJ board of trustees, including Beisner, who is chair, were touring the hospital on behalf of the organization, whose goal is to build peace through financial support of education and health care in the Diocese of Jerusalem.

Every two years, AFEDJ trustees travel to Palestine, Israel and Jordan to visit many of the institutions the organization raises funds to support. Since its founding in 1988, AFEDJ has raised more than $25 million for schools, hospitals and centers for disabled children in the area, with $1.6 million donated in 2018 alone.

A total of 12 AFEDJ trustees from across the Episcopal Church took part in the trip this October, which coincided with an announcement by the U.S. government that it would cut $200 million in aid to the United Nations Relief and Works Agency, or UNRWA. The agency, founded in 1949 to meet the needs of Palestinian refugees, provides support to a number of education, health care, relief and social service organizations, including Ahli Hospital. These cuts to U.S. aid mean the hospital’s monthly stipend from UNRWA is now reduced from $54,000 to $14,000.

For an institution that spends more than $100,000 monthly on diesel fuel to keep generators running amid daily power outages, the implications are profound. Such cuts jeopardize the program that treats about 400 underweight and malnourished children each year, a lifeline to families in Gaza, where according to a 2015 study, 24.4 percent of children are underweight and 52.4 percent have stunted growth.

And that is just one of the hospital’s medical services threatened by the withdrawal of U.S. aid. Ahli Hospital’s medical care proves vitally important because of the restrictions Israel places on the movement of people and supplies to and from Gaza. More than 40 percent of all requests from Gaza residents for travel permits to seek medical treatment outside the Palestinian territory are denied.

In addition to the significant decrease in aid directly from UNRWA, hospital administrators must deal with the effects of cuts to USAID-funded partners. A three-year, $900,000 joint project between Ahli Hospital and Mercy Corps, which subsidizes medical care to refugees, was also defunded. The elimination of two major funding sources at once has forced a reduction in direct services to patients and triggered staff layoffs.

“I’m afraid that if [cuts] continue in the future, that on your next visit, you can find children nearby the walls of this hospital dying,” Tarazi said in a briefing to AFEDJ trustees during their visit. “We are people. It’s possible there are conflicts between governments, but what are the faults of normal people? Of poor people?”

Beisner put it this way: “The cuts to U.N. funding severely affect Ahli Hospital. Its leaders told us they may be looking at a shortfall of $700,000 this year. They’re living the baptismal covenant in the most inspiring way, really seeking and serving Christ among all persons. Almost everyone who walks through the door is Muslim, but they seek this hospital because of the values that it incarnates.” 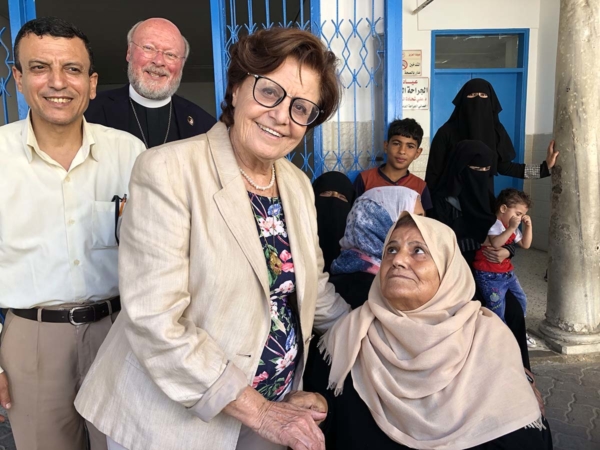 Ahli Hospital is not the only diocesan humanitarian institution facing the prospect of drastic cuts to services as the result of the change in U.S. policy.

The Jerusalem Princess Basma Centre for Disabled Children in East Jerusalem is one of the few institutions in the Palestinian territories to provide rehabilitation and medical treatment to children with disabilities and their families. The center, already on tenuous financial footing because of overdue payments from the Palestinian National Authority’s Ministry of Health, has been rocked by the announcement that the U.S. government will cut $25 million in bilateral aid to the East Jerusalem Hospital Network, of which it is a member. Such cuts compound existing shortfalls and further impede the center’s ability to provide critical services to children and their families. Particularly vulnerable is the service that provides children with newly identified disabilities and their mothers an intensive two-week residential therapy program. The center’s classroom for autistic children, the only one of its kind to serve Palestinians, also is at risk. As many as 500 children are in jeopardy of losing services if the funding shortfall is not addressed.

“If we don’t receive money for providing therapies for children, we will have no choice but to close down in a few months because we will not have money to pay salaries or our suppliers,” the center’s director, Ibrahim Faltis, said. “The situation is so severe that somebody who is sane needs to intervene to help us.”

In a recent letter addressed to partners across the Anglican Communion, the Most Rev. Suheil Dawani, archbishop of the Episcopal Diocese of Jerusalem, expressed his concerns related to the cuts.

“If we don’t act immediately and shift gears to find other means of support and subsidy to our affected diocesan institutions, I can’t perceive how we can sustain and support them with the limited resources we have,” he wrote. “I am very much concerned and afraid that cutting off all American assistance, mostly in humanitarian aid, has hobbled the aid agencies that receive the funds, and more consequently, crippled the lives of Palestinians who continue to live in dire need and have fewer employment prospects now more than ever. This is unfair and beneath our compassion.”

Despite concern for the Diocese of Jerusalem’s continued humanitarian work, AFEDJ trustees were struck by the hope they found among the institutions’ leaders.

Endicott Peabody, a trustee from the Diocese of Arizona, said, “Our visit served to remind us that this work does not stop or even slow with the loss of these grants. I was particularly struck by the spirit of optimism and hope that I saw in leaders’ faces and heard in their words. I wondered why they were not as angry and frustrated as I felt. It’s clear that Jesus’ words to ‘love thy neighbor as thyself’ are more than just words here. They are the creed that drives our lives and our work every single day.”

Beisner also raised the responsibility Episcopalians share for the work of the Diocese of Jerusalem. “We’ve heard leaders here say these are our ministries, too, because we are one body in Christ,” he said. “It’s not their ministry, and we’re the onlookers and cheerleaders. It’s our ministry.”

– Heidi Shott is communications director for the American Friends of the Episcopal Diocese of Jerusalem.