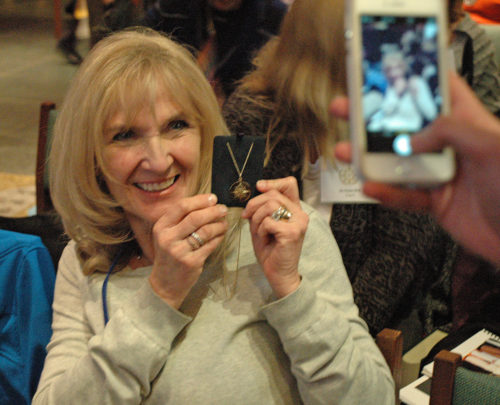 Beth Adamson poses in April 2015 with the Award for Global Service that was recently presented to her by the Anglican Communion Office at the United Nations. Photo: Mary Frances Schjonberg/Episcopal News Service

[Anglican Communion News Service]  Colleagues and supporters have paid tribute to a leading campaigner for gender justice within the Anglican Communion, Beth Adamson-Strauss. Beth Adamson, as she was known, a Methodist who was a volunteer for the U.S.-based Episcopal Church, died on Aug. 5 in hospital where she was receiving treatment for serious injuries caused by an accident two weeks earlier. For several years she had led the Episcopal Church’s campaigning on gender justice issues at the United Nations; and helped to organise delegations from both the U.S.-based church and the wider Anglican Communion to the annual U.N. Commission on the Status of Women (UNCSW) meetings in New York.

“Beth has touched so many people with her passion, determination, wisdom and joyful heart,” Canon Terrie Robinson, the Anglican Communion’s director for women in church and society, said. “Through her faith-filled and tireless work at the U.N. and with Anglican delegations to UNCSW, there are women and girls the world over who have been inspired and energized by her to be strong champions for gender equality, even in the most difficult circumstances.

“I am one of them and I will always be grateful to her. Our love and prayers are with Beth’s husband Ned and their family. Beth will be sorely missed by so many.”

Rachel Chardon, the former general program and administrative officer at the Anglican Communion Office at the United Nations in New York, said: “For many years, Beth and I led delegations to the U.N. Commission on the Status of Women on behalf of the Anglican Communion Office at the United Nations. Together, we worked on every aspect of preparing women from around the world to attend this annual two-week session. This included a Time Line that would generate over a seven month period materials for study that addressed the priority theme set for that year with the main purpose of empowering women.

“When the two-week event concluded, these women had bonded and they soon returned home with new resources to share with their respective communities. Beth was exceptional in this charge! As a volunteer to the Office, Beth was a key support in engaging all elements of gender awareness via the various bodies of the United Nations and served as a sounding board for ideas approaching various issues.”

The Rev. Margaret Rose, ecumenical and interreligious deputy to Presiding Bishop Michael Curry and former Episcopal Church director for women’s ministries, said: “Beth was instrumental in organizing what was then called Anglican Women’s Empowerment. She has since continued that work through the Anglican Communion office, the U.N. Working Group on Girls and much more.

“But as important as her accomplishments, which were many, was Beth herself, whose generous spirit called out the best in every one she touched. . . Ned Strauss, Beth’s husband, wrote about ‘our Beth’ – and that is indeed who she was: a woman who consistently offered herself to others, that they – we – might be more whole.

“She carried and offered the ‘light of Christ’ to all, and experienced the world with joy and wonder. In the face of suffering or poverty or pain or injustice, Beth refused to give up hope and was instrumental in addressing systemic change in every possible way.

“She knew we were in it for the long haul and her legacy will be that none of us gives up the hope which propelled her and us to continue the struggle.” 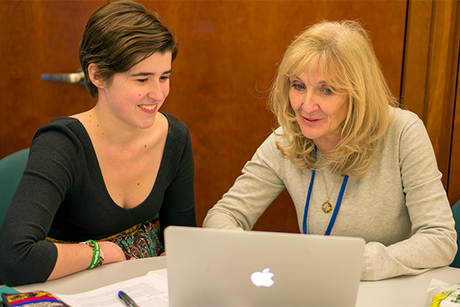 The Episcopal Church’s representative to the United Nations, Lynnaia Main, also paid tribute to Adamson, saying she was “beloved by so many.”

She added: “I can hardly think of any person with more light, joy, smiles, smarts, energy, kindness and love for God and others than Beth. Some light has gone out of my life, all of our lives, with her passing.

“She expanded her work to focus at the crossroads of church, United Nations and girls’ empowerment, most especially through the UN’s Working Group on Girls (WGG). She served as co-chair of the WGG and continued to be very active there. She was an integral part and pillar of so many communities at the UN, an astute observer of the political machinations of the UN and an excellent and very knowledgeable strategist in reaching member states to advocate for girls’ rights.”

Main spoke about Adamson as “a valued mentor and colleague” and how “the warm and totality of her embrace and inclusiveness in welcoming newcomers to UNCSW” was “so much appreciated”.

She said: “her joyous love for people was genuine and I never ever heard her say a critical word about anyone. She managed to be light-hearted, quick to laugh and fun to be around while at the same time being totally serious about and committed to her work. She was especially good at being a mediator who could hold together worlds in tension, bringing them in closer relationship to each other through her patient relationship-building. She was a master negotiator and very much a motherly influence on the girls in her care.”

Every year on Oct. 11, the International Day of the Girl Child, Beth would take a group of “girl advocates” from the Working Group on Girls to the Episcopal Church Center in New York. “They would visit our space so the girls could practice their lines and relax prior to their Girls’ Speakout at the UN for the International Day of the Girl Child event,” Main said. “Those girls loved Beth – I watched her nurture many young women with her kindness and encouragement.”

She pledged that  Adamson’s “exemplary work will continue to move forward, as we honour her presence, her gifts and her legacy, but we can never replace her,” she said. “We have loved her and learned so much from her. We will continue the spirited work she’s done, as best we can, inspired by her example, a gift to us and the world.”

In 2015, Adamson was presented with an Award for Global Service in recognition of her for her dedicated work to strengthen Anglican women’s presence at the UNCSW. The award was created to honour volunteer service that furthers the work of the Anglican Communion through the vehicle of the U.N. Office.

Speaking after her death, Strauss said that had she survived, it was likely “that she would never fully recover her cognitive ability or her fine motor skills.” He said: “so now, she can rest and be totally at peace.” A private family funeral service is being planned in Exeter, Nebraska, where she was born and raised, ahead of a celebration of her life for friends and supporters in Redding, Connecticut, most likely in September.