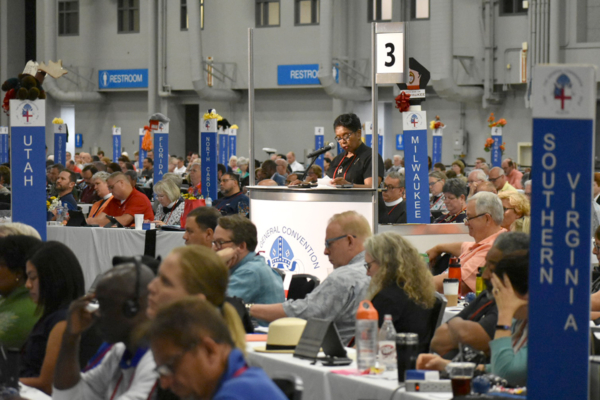 Deputy Diane Pollard of New York speaks July 5 in favor of the resolution to establish a pay structure for the House of Deputies president. Photo: David Paulsen/Episcopal News Service

[Episcopal News Service – Austin, Texas] The House of Deputies voted July 5 by overwhelming majority in favor of creating a system for paying its president for the work of the office, in recognition of how that work has expanded significantly over the past several decades.

The Rev. Gay Clark Jennings, who currently holds that office, stepped down as chair of the legislative session during discussion of Resolution B014, and after three deputies spoke in favor and one deputy against, Vice President Byron Rushing called a voice vote and announced the resolution had passed. A request for a vote count confirmed the result: 705-120, or 85 percent in favor.

“It has been a long time coming, and I’m sure there are some very special angels looking down on us today as we consider this action,” Diane Pollard, a lay deputy from New York, said before the vote in urging the resolution’s passage. It now goes to the House of Bishops for final approval.

The legislative Churchwide Leadership Committee voted unanimously July 4 to recommend Resolution B014 for adoption by both the House of Deputies and the House of Bishops. The resolution would pay the House of Deputies president director’s and officer’s fees “for specific services rendered in order to fulfill duties required by the church’s Constitution and Canons.”

The issue of compensating the president has been discussed for decades. General Convention considered the salary issue in 1997, 2000 and 2015. Each time, the deputies were clear that they wanted to see their president compensated.

“We have debated this issue across several General Conventions in the last three decades. This is the way we get this done and appropriately remunerate and compensate the president of the House of Deputies,” said the Very Rev. Steven Thomason, a deputy from Olympia who is a member of the Churchwide Leadership Committee.

“I see this as a generous and substantive move forward,” he said. “This resolution recognizes the [president’s] multiple, mandatory corporate and fiduciary roles.” 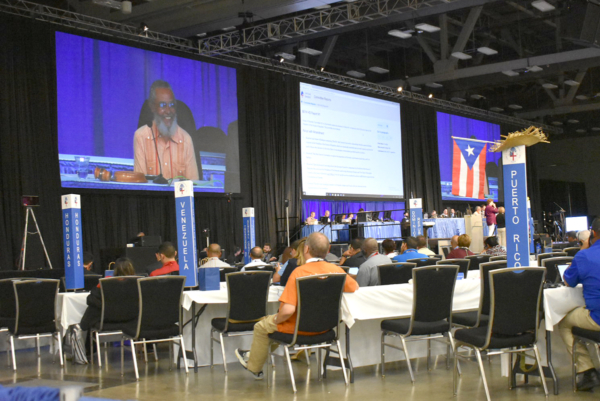 The question of a salary for the House of Deputies president prompted a rare conference committee between bishops and deputies in the waning hours of the last convention. The 2015 meeting of convention eventually agreed to postpone making a decision, instead calling for the presiding bishop and the president of the House of Deputies to appoint a task force to study the issue.

The Task Force to Study Church Leadership and Compensation, called for by the 78th General Convention, concluded in its report to this meeting of convention that the work of the House of Deputies president amounts to a full-time job. Its Resolution A028 calls for a salary but does not set an amount. Pollard chaired the task force.

The position, which is filled by election during each meeting of convention, has a travel budget and a paid assistant. Each president is limited to three consecutive three-year terms.

Supporters say making the office a paid job in some way would broaden the pool of people able to consider running for election. The task force said that only people who are older and/or have what it called favorable “personal economic circumstances” can realistically hold the office. Thus, presidents are not always chosen based solely on gifts and skills, the members said.

Others disagree with any proposal to pay the deputies president, some saying they fear “mission creep” and those polity implications in the form of an expansion of the president’s duties and authority.

The only deputy to speak against the resolution on the floor of the house on July 5 was Curtis Hamilton of West Missouri. He took issue with assigning fees for service as a director and an officer.

“I believe that if the president of the House of Deputies is to be provided fees for service, all of our directors should be remunerated similarly,” he said.

Diocese of Northwestern Pennsylvania Sean Rowe, B014’s proposer, told the committee July 4 that the resolution recognizes that the president of the House of Deputies has “extraordinary duties, that it is a matter of justice, that it is a matter of the pool of candidates that could present themselves for such a position [in its current unpaid form] and that it is fair for what the Constitution and Canons require of the position that it be compensated.” He also said the resolution changes nothing about the church’s polity and the role of the House of Deputies president compared to that of the presiding bishop.

Discussion and voting on the resolution by the House of Deputies took about 20 minutes. After its approval was confirmed and the vote count announced, applause broke out on the floor, which drew some objections.

I’m glad the PHOD compensation resolution passed, but we should not applaud legislative action. Ever. #gc79

Jennings, now having returned to her seat as chair, said she agreed.

“The House celebrates people but not votes,” she said.