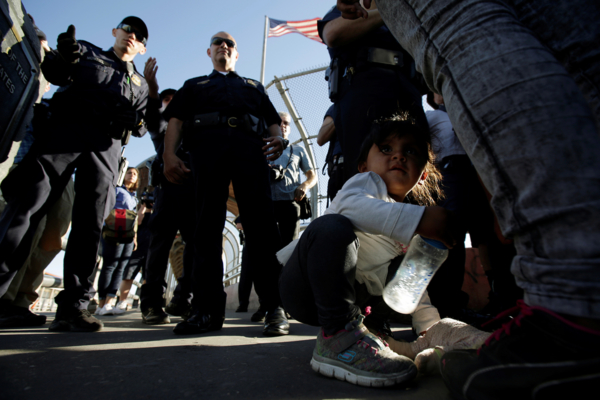 [Episcopal News Service – Washington, D.C.] Phones are ringing off the hook at congressional offices on Capitol Hill as Americans call demanding migrant children be reunited with their parents, and for an end to the Trump administration’s immigration policy of separating families at the Southwest border, according to legislators. 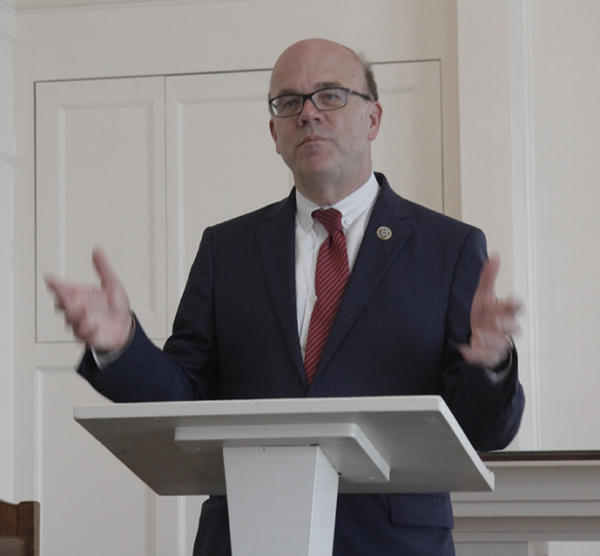 “Calls coming in to Capitol Hill are at an all-time high, from Democrats and Republicans, the business community,” U.S. Rep. Jim McGovern, a Democrat and Roman Catholic from Massachusetts, told those gathered June 21 at a 12-plus-hour prayer vigil for family unity at the Simpson Memorial Chapel on Capitol Hill.

The Episcopal Church’s Washington, D.C.-based Office of Government Relations hosted the prayer vigil in the United Methodist Building’s chapel on Maryland Avenue N.E. Of the members of Congress invited, U.S. Sen. Tom Carper, a Presbyterian and a Democrat from Delaware; McGovern; and two other Democrats, U.S. Rep. Jim Clyburn, a Methodist from South Carolina, and U.S. Rep. Dwight Evans, a Baptist from Pennsylvania, all dropped in and offered comments. The vigil in the chapel began with an 8 a.m. Morning Prayer and ended with Compline.

Western New York Bishop William Franklin preached during Morning Prayer about the role of the first Presiding Bishop William White, the first chaplain to the Continental Congress. He saw two authorities for Christians – the Bible and belief in scripture, and reason.

“We are called by scripture to be compassionate, and reason compels us to see that the administration’s policies do not make us safer or more secure, and that it is possible to have a just and humane immigration policy,” said Rebecca Linder Blachly, director of the Office of Government Relations.

At least 150 people attended the vigil in Washington and 20,000 people tuned in on Facebook Live. 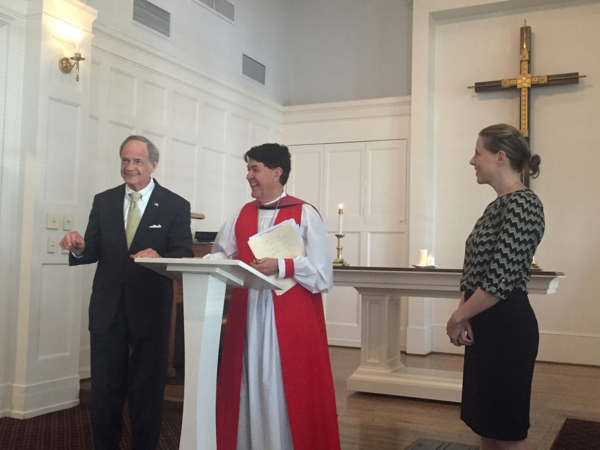 “We are moved and energized by the passion and the compassion we are seeing. We are committed to praying and to acting and to stopping this outrage,” said Blachly. “From a political standpoint, we have seen that politicians from both parties have spoken out against this cruelty – we know that the trauma inflicted on children spans to the next generation.”

While people of all faiths dropped in and out of the chapel for prayers, stories, testimony, hymns and fellowship, the House of Representatives convened across the street to vote on two immigration bills. 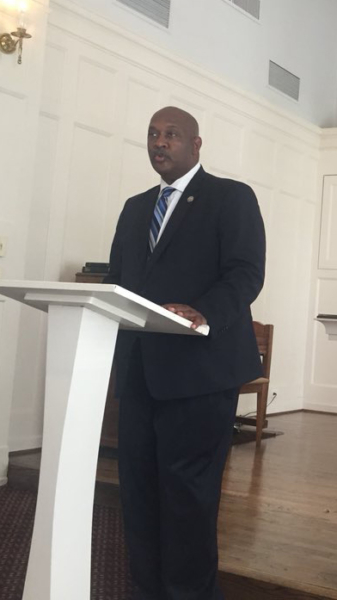 “Unfortunately, we are voting on what I call ‘deportation bills’ not ‘immigration bills.’ today, and it still doesn’t solve the problem,” said Evans of Pennsylvania, who came by after the first vote.

Two bills came up for vote in the House on June 21. The first, a hard-line bill, failed. House Republicans delayed the vote on a compromise bill that would provide young undocumented immigrants, known as “Dreamers,” a path to citizenship and would allow families to be detained together.

Still, the compromise bill doesn’t provide a permanent fix for the at least 3.6 million Dreamers, or undocumented immigrants who were brought illegally to the United States as minors and who are protected from deportation by the 2012 immigration policy, Deferred Action for Childhood Arrivals.

Since the summer of 2014 when unaccompanied minors began arriving at the border in unprecedented numbers, every summer brings another humanitarian crisis. “This summer it is a disastrous situation that is happening because they are separating children from their parents,” said Eva Maria Torres, president of Dreamers’ Moms of Virginia, who came to the United States from Mexico in 2006.

Every day, Torres, who was the last to speak at the chapel, said she hears stories from mothers separated from their children, either because they left them behind with family in Honduras, El Salvador or Guatemala, three of the world’s most violent countries, so they could send money back home. She also hears the anxieties of undocumented mothers who fear deportation and being separated from their U.S.-born children. Now, the stories, images and cries of children and mothers being separated at the border as a result of the administration’s zero-tolerance policy have created new fears and anxieties, Torres said.

The women take risks and face danger to protect their children and are being separated from those they came to protect, she said. “The images have made me reflect, how much more are we going to allow to happen … as a faith community that believes in God, and know and count on God’s protection? I find myself asking, what actions is God asking of us, calling us to do? Now is the time to take action,” Torres said. “The immigrant community is taking a lot of risks, but not just Latinos – it’s immigrants of all nationalities.”

“You, those who are citizens, you have the power to make a change and do something,” she said. “Let’s be proactive so that we don’t repent later the situation or actions that have taken place. The support that is needed is not a handout; that’s not what the community needs today. As citizens, I’d ask you to be empowered to talk to those in power.”

It’s not just migrants on the move fleeing Central America; worldwide, an unprecedented 68.5 million people have been forcibly displaced from their homes, 24.5 million of them are refugees and half are younger than 18. For more than a century, the Episcopal Church has welcomed refugees and advocated for immigration policies that protect families, offer a path to citizenship and respect the dignity of every human being. Some of this work happens behind the scenes; other times, it is carried out in public statements, advocacy and public witness.

It was the phone calls, letters and emails that forced the president’s hand, not anything that happened in the halls of Congress, the legislators agreed.

Under intense public pressure, President Donald Trump on June 20 reversed course and signed an executive order meant to keep children and parents together for an indefinite detention period. Still, it’s unclear how the administration would implement the policy, and the order stated that the more than 2,000 children already separated from their parents would not be “grandfathered in,” creating confusion in the capital and at the border.

Later that evening at a rally in Duluth, Minnesota, the president returned to his fear-based rhetoric, doubling down on his travel ban and his plan to build a wall along the U.S.-Mexico border. 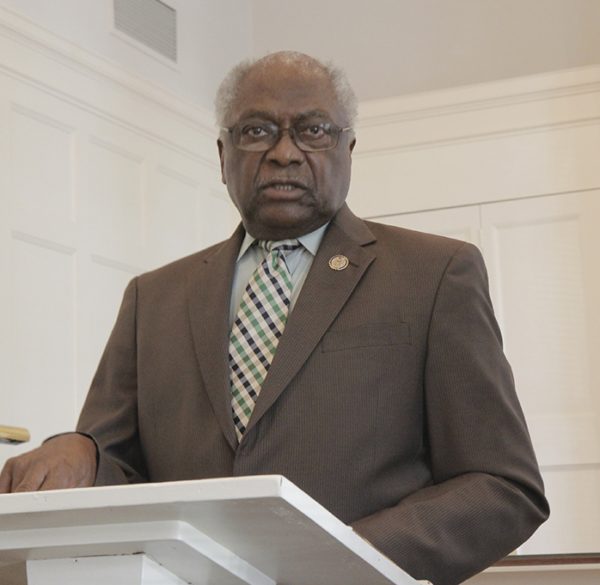 For Clyburn, of South Carolina, watching the news unfold on television and in newspapers has made him think back to the time when French historian Alexis de Tocqueville traveled across the United States first to study its prisons but eventually in search of America’s greatness. De Tocqueville searched the halls of government and the countryside, and eventually found it in the churches, during the time of slavery, no less, Clyburn said.

“He saw in the people he worshipped with a certain amount of goodness, and he said in talking about that experience that ‘America is great because America is good.’ And if America ever ceased ‘to be good, America will cease to be great.’ “What we are seeing today is ill-advised policy, not law, but policy. It’s a loss, if it ever existed, of goodness. We cannot as people of faith sit idly by and ignore this,” Clyburn said.

Since October 2017 through the end of May, Customs and Border Protection agents have detained more than 252,000 people – 32,371 unaccompanied minors and 59,113 families. In early April, the Trump administration implemented its “zero-tolerance” immigration policy aimed at prosecuting migrants crossing the border illegally and separating them from their children; 2,322 children have been taken from their parents, according to the Department of Health and Human Services. The policy was meant to deter other families – many fleeing violence in Central America – from attempting to request asylum at the U.S.-Mexico border.

Never in his wildest dreams did the Rev. Grey Maggiano, rector of Memorial Episcopal Church in Baltimore, Maryland, and a former State Department employee who worked on prison reform in Afghanistan, think he’d see mothers and children kept in detention centers in the United States. It wasn’t unusual in Afghanistan to see boys fleeing sexual violence, girls seeking protection from child marriage, and mothers escaping domestic violence and their children held in detention centers for their protection, but still it was under horrible circumstances and had a traumatizing effect on everyone.

“It’s like a bad dream … seeing all the things you never thought would happen here, seeing what’s possible in our country coming to fruition in real time,” said Maggiano, outside the chapel after addressing those present.

When Carper, the senator from Delaware spoke earlier in the day, he talked about the violence in Central America’s Northern Triangle and told the story of a brother and sister. The brother was forced to join a gang and his initiation included raping his sister. Rather than let that happen, their parents helped them leave, and they landed in Delaware.

“There is hope in Honduras, Guatemala, El Salvador; there’s hope in those countries in the Northern Triangle, but there’s a lot of misery, and we are complicit in their misery,” he said, referring to Americans’ appetite for drugs.

“I’m just so profoundly disappointed with this government, and I’m so profoundly disappointed, not only with the president, but with my colleagues who are going along with this,” said McGovern. “I just don’t know how people can do this. I worry we are losing our humanity, and when we hear biblical versus being invoked to justify this, you know, I’ll be honest with you, I just want to scream. We keep on saying this is not who we are; we’ve got to prove it.”

Trump made curbing immigration a centerpiece of his campaign and his administration. Within days of taking office, Trump signed three executive orders cutting funding to so-called sanctuary cities, calling for a wall along the U.S.-Mexico border and suspending the entry of immigrants from seven Muslim-majority countries. Trump also made a significant reduction to the nation’s refugee resettlement program, setting the number of refugees allowed to enter the country in 2018 at 45,000, less than half the 110,000 admitted in 2017.

“Our country has been in the midst of a great, profound moral debate over keeping families together,” said Presiding Bishop Michael Curry in a video promoting the June 21 vigil. “Whether children should be separated from their mothers and from their families, while there appears to be some sense of resolution about that immediate issue, the broader concerns about detaining families continue. The ways that we implement our immigration concerns, the ways that we secure our borders, need not be separated from our compassion and our human decency.”