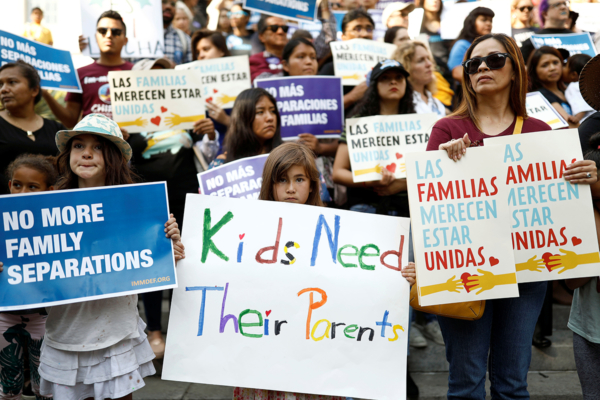 [Episcopal News Service] In mid-May, a Honduran man who crossed the U.S.-Mexico border into southeast Texas with his wife and 3-year-old son committed suicide at a county jail, where after requesting asylum, border agents told him he’d be separated from his family.

Family separations aren’t just happening at the border, roundups are happening nationwide. In early June, in Seattle, Washington, 206 undocumented immigrants apprehended at the border and held in U.S. Immigration and Customs Enforcement custody – 174 of the women, at least half of them mothers – were transferred to a detention facility near the airport. Somewhere along their journey, the mothers were separated from their children. Some weren’t given the chance to say goodbye and could hear their children screaming in a nearby room; some don’t know their children’s whereabouts. Most, though not all, of the women fled ongoing gang and domestic violence in El Salvador, Guatemala and Honduras, three of the most violent countries in the world.

On June 11, U.S. Attorney General Jeff Sessions further clarified the Trump administration’s immigration policy saying gang violence and domestic abuse are not grounds for asylum, overturning a precedent set in 2016 by the Department of Justice’s Federal Board of Immigration Appeals.

“Immigrants should ask to apply lawfully before they enter our country,” said Sessions. “Citizens of other countries don’t get to violate our laws or rewrite them for us. People around the world have no right to demand entry in violation of our sovereignty.”

To carry out the new enforcement policies, Sessions sent 35 prosecutors to the Southwest and moved 18 immigration judges to the border.

On June 7, Sessions quoted the Apostle Paul in Romans 13, using the phrase about “obeying the laws of government because they were established by God” in defense of the Trump administration’s family separation policy. On June 8, Presiding Bishop Michael Curry refuted Session’s claims.

“For those of us who follow Jesus, his teachings are the final authority and Jesus said, ‘love your neighbor as yourself,’ (Matthew 22:39) that ‘those who welcome the stranger have welcomed the Lord himself and are therefore blessed.’ (Matthew 25:35), and that to ‘do unto others as you would have them do unto you.’  (Matthew 7:12).  And that’s just in Matthew’s gospel!” said Curry.

“For those of us who are American, the words emblazoned on the Statue of Liberty define who we are. ‘Give me your tired, your poor, your huddled masses yearning to breathe free.’ That’s America. A shining city on a hill,” he said.

“It is not the Christian way and it is not the American way to separate children from their parents at the borders of this country.”

On June 6, a federal judge in San Diego refused to dismiss a lawsuit filed by the American Civil Liberties Union challenging the Trump administration’s immigration policy by saying family separation may violate the Constitution’s due process clause. The judge did, however, dismiss a separate challenge saying that the practice violates asylum laws.

Entering or attempting to enter the United States illegally, however, and requesting asylum are not one in the same.

Under international law, people fleeing violence and persecution have the right to request asylum. The Episcopal Church has a longstanding policy affirming the universal right to seek asylum; it recognizes the need to protect vulnerable people.

Last week, Curry signed an ecumenical and interfaith statement expressing concerns over a recent U.S. government policy “calling for more stringent enforcement of federal immigration laws.” A policy, they say, will likely result in an increase in family separations.

“I really appreciated that Bishop Curry signed the statement … decrying the separation of families in faith-based terms,” said longtime immigration advocate Sarah Lawton, who chairs the House of Deputies’ General Convention Social Justice and International Policy Committee. “I appreciate that he recognized that we, as Christians, as Episcopalians, respect the family as one of the fundamental building blocks of society and recognize that in our own sacraments.”

That the United States would deploy a punitive policy separating families at the border – taking children and not telling their parents where they are going in some cases, not allowing them to say goodbye – to deter asylum seekers is unimaginable, she said, in a phone call with Episcopal News Service.

“It’s so cruel, depraved really. They don’t need to do that. … Under international law, they have the right to make an asylum claim,” said Lawton, who is also a lay deputy from the Diocese of California. “We should all be on the phone – out in the streets – calling our legislators. U.S. policy has been in crisis for a long time; it has intensified under Trump and has become more racist. The administration is going after the low-hanging fruit, families that are registered [in government tracking systems]. It’s a terror that’s descending on families. As a church, it’s our duty to protect the dignity of every human being.”

The stories of fathers and mothers being separated from their children at the border are deeply disturbing, said Lacy Broemel, the Episcopal Church’s immigration and refugee policy analyst working out of the Washington, D.C.-based Office of Government Relations, in an email to ENS.

“The Office of Government Relations is urging Episcopalians to contact their members of Congress to ask the administration to end this harmful policy of separating families at the border. Our office is sharing the presiding bishop’s statement with members of Congress and meeting with them to share the Episcopal Church’s deep concern about this practice and advocating through the appropriations process to oppose additional funding to detention centers,” she said.

“Further, we are continuing to focus on advocating for larger-scale changes to our immigration policies such as citizenship for Dreamers and other undocumented persons in the U.S., implementing humane and reasonable policies at our border, and addressing the violence and poverty these families are fleeing in their home countries,” said Broemel.

At its 79th General Convention in July in Austin, Texas, the Episcopal Church will consider legislation reinforcing its positions on refugees, immigration and migration, including Resolution D009, which examines the Christian principles for responding to human migration. (The 2015 General Convention passed several resolutions strengthening its position on immigration and refugees.)

Convention will look not only to respond to the current migration crisis, but also to adopt a long-term response strategy in the United States, as well as in places such as the Dominican Republic, where Haitian migrants often suffer abuse, and in areas where climate change threatens to displace entire communities.

“The Episcopal Church has a long-standing and well-documented history of championing comprehensive immigration reform as well as humanitarian support for refugees,” said the Rt. Rev. Anne Hodges-Copple, bishop suffragan for the Diocese of North Carolina. “The interest and energy for this work is only increasing as our local communities are continuing to be blessed with new neighbors from others countries. The stories of families torn apart and suffering under the current broken immigration system are the stories of families we know from work, school and church.

“Five resolutions on immigration reform have been submitted to the Committee on Social Justice and U.S. Policy so far. We expect more submissions addressing the Justice Department’s policy of separating children from their parents. This pointed departure from decades of previous Republican and Democratic-led administrations’ policies defy any commonly held definition of family values,” she said. “A great gift of General Convention is our resolution process as a way to listen, speak and learn from a wide variety of voices and prayerfully discern a biblically, theologically informed position and call to action.”

Earlier this month, Rebecca Linder Blachly, the director of the Office of Government Relations, signed on to an interfaith statement decrying family separation and urging national leaders to protect family unity.

In May, the Office of Government Relations hosted a webinar on immigration policies and advocacy titled “Loving Your Neighbor: Faithful Actions on Immigration.” Click here to watch it.