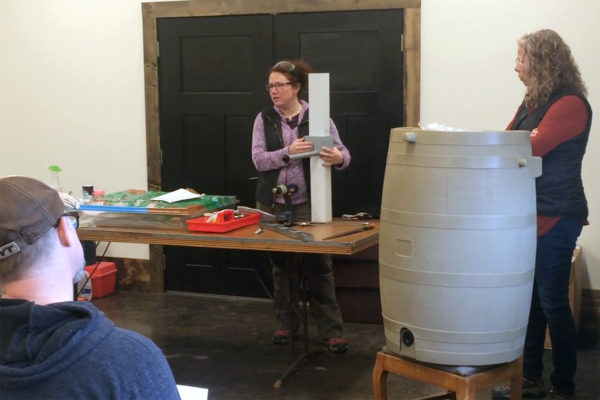 [Episcopal News Service] You might say Trinity Episcopal Church in Mineral Point, Wisconsin, is offering creation care by the barrel.

The congregation, thanks in part to a Stewardship of Creation grant from the Episcopal Church, distributed 30 rain barrels on April 21 to residents of this small city in mostly rural southwest Wisconsin. Its rain barrel workshop kicked off a weeklong program of Earth Day events on the theme “Water Is Life.”

The Rev. John Floberg, Episcopal missioner on the Standing Rock Sioux Reservation in South Dakota, will speak later this week in Mineral Point about the Episcopal Church’s opposition last year to part of the Dakota Access Pipeline. And Trinity’s $10,000 grant also will be used to create raised garden beds and a separate rain garden on church grounds, as well as to produce a children’s education program on environmental issues.

This flurry of activity follows Trinity’s success hosting a one-day environmental film series in September that was backed by a Diocese of Milwaukee grant. These are examples of ways Trinity is deliberately reaching out to residents on environmental issues, said the Rev. Brian Backstrand, Trinity’s rector.

“I think we’ve touched a chord of interest and concern in the community,” he said. “It’s something that I’m personally very passionate about.” 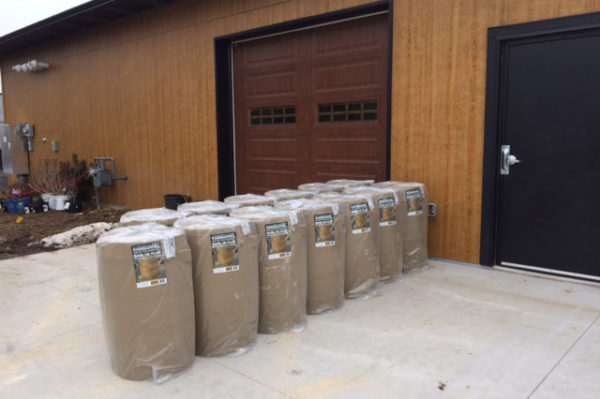 Rain barrels at Aspen Ridge Home & Garden in Mineral Point, Wisconsin, are lined up ready for customers to take home through a discount program set up by Trinity Episcopal Church. Photo: Elizabeth McGehee

Trinity was able to offer the rain barrels, which typically cost $180 each, for just $46 because the congregation negotiated with the manufacturer to bring the price down to $114. The grant then covered more than half that cost. To receive the rain barrels, each customer was asked to attend a workshop on April 21 at Aspen Ridge Home & Garden to learn how the barrels work and how to set them up.

The idea for the rain barrel initiative stemmed from a meeting with an official at the state Department of Natural Resources, or DNR.

Jane Stenson, who leads Trinity’s Creation Care Committee, told Episcopal News Service that she, Backstrand and Trinity’s senior warden met with the DNR official to learn more about water issues in Iowa County. Backstrand had recently preached at Trinity on the gospel passage about the woman at the well and the water of eternal life, and Stenson noted echoes of biblical language in the DNR specialist’s scientific descriptions of how “old water” is renewed.

While rain water is naturally fresh, agricultural and stormwater runoff is one threat to the drinking water in the Mineral Point area, the specialist said. He recommended subsidizing rain barrels and creating a rain garden, which catches runoff and filters the water before pollutants can enter storm drains.

Trinity sold all of the discounted rain barrels it offered, and Stenson said she has been encouraged by the response.

“The community is small and our church is even smaller, so the idea was not to pay attention to how many people were coming through the doors on Sunday morning,” she said. “The idea was, what can Trinity do to present itself to the community?”

She is upfront in saying one of the most important lessons the congregation has learned in the past year is how to market its outreach to the community. “There’s a lot that we have to share to people, but if nobody’s listening, then you’re not sharing,” she said.

Trinity’s first big step was hosting the Wild and Scenic Film Festival, held Sept. 9 at the Mineral Point Opera House. It featured several short films on environmental issues and drew a crowd of about 200 people.

The turnout reflected a diversity of backgrounds in Mineral Point and nearby Dodgeville, which Trinity also serves. Mineral Point has a growing arts community, Backstrand said. At the same time, the cities are surrounded by farmland and rural life, and some families have lived in the area for generations. Others are relative newcomers, drawn by the “diversity of music and art and also the small-town feel.”

“So we have people with small-town backgrounds with long-term history here. And some of the people are in both worlds,” he said. “It’s a unique place.”

Backstrand developed his love of the natural world growing up in Oregon, with its great forests and mountain ranges, and his uncle also had a farm. Backstrand and his wife lived for several years on their own farm in Lafayette County, Wisconsin, before moving to Mineral Point in 2015 when he became rector.

The love of the environment that he and his wife share soon rubbed off on the Trinity congregation.

“We care about these things, and others in the church responded,” Backstrand said.

The congregation plans to expand its film series to three nights this September and invite a Native American storyteller to speak, as well.

In the meantime, Backstrand and the congregation look forward this week to hosting Floberg, the South Dakota priest, first at a series of small events and then at a larger public event April 28 in the Opera House. Floberg also will join the congregation for Eucharist the following day.

After the Eucharist, the church will hold a ceremony to bless the church’s own rain barrels, and residents who bought discounted rain barrels from Trinity this month can have theirs blessed, too. Backstrand also has offered to bless the barrels during home visits.