You know, that nondescript middle part of the United States that you have to fly over to get from one lively and exciting coast to the other. But the great American middle is actually a lot more lively and exciting – and spiritually rich – than the “flyover” stereotypes suggest, according to Episcopal transition ministers who are taking a lighthearted new approach to recruiting clergy to their dioceses.

They’ve dubbed their campaign Flyover Church, and they see it as a way of reclaiming that epithet, by using local examples, compelling personal stories and an upbeat marketing plan to encourage more priests to consider religious calls in the center of the country.

“We want to tell the church that what we have going on here is just as exciting as what’s going on the coasts,” said Michael Spencer, canon to the ordinary in the Diocese of Eastern Michigan.

Spencer and the other transition ministers behind the Flyover Church campaign are careful not to present their efforts as a competition with other dioceses. There are worthwhile calls in every part of the country, they say, and they hope this campaign will catch the attention of people who otherwise would never have considered moving to a place like Flint, Michigan, or Omaha, Nebraska.

“Many of us found our way here from other places,” said the Rev. Liz Easton, the Diocese of Nebraska canon to the ordinary. She is a Seattle native and part of the team behind Flyover Church. “It was sort of a mystery: How can we help tell the story of this place where good work is being done and Jesus is being met and served?” 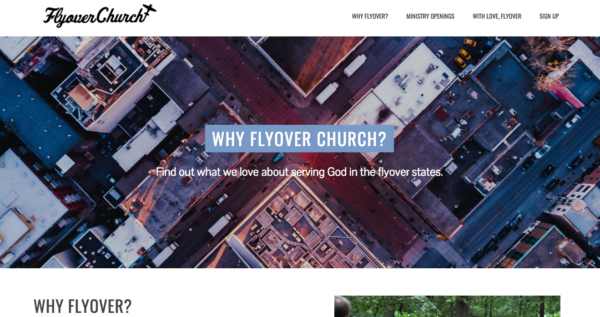 The Flyover Church website combines a list of calls at partner dioceses with personal testimonials about why those seeking calls should consider the region.

What exactly is Flyover Church? At this point, it’s primarily a website, flyoverchurch.org, that offers a list of calls at some of the participating dioceses. So far, those dioceses number 13: Arkansas, Eastern Michigan, Kansas, Kentucky, Lexington, Michigan, Milwaukee, Missouri, Nebraska, Northern Indiana, Ohio, Southern Ohio and Western North Carolina. Spencer is  talking with additional dioceses about joining the campaign.

“Ministry in Flyover Country is unlike – and exactly like – ministry in other parts of the world,” is how the campaign introduces itself on the website.

Flyover Church also offers a platform for sharing homespun testimonials from some of those dioceses. A post by the Rev. Torey Lightcap, canon to the ordinary in the Diocese of Kansas, is playfully titled “The Middle: Not the Sameness You Were Looking For.”

“Every week I get to meet people who are eager to make the church go and to put Christ’s words into action,” Lightcap writes. “Everywhere you stop and look there are faithful, entrepreneurial Episcopalians who are getting the job done. You’ll find that your priestly ministry is every bit as valuable and necessary and appreciated to these wonderful people as it is anywhere else.”

The challenge of finding candidates to fill calls, of course, is felt across the Episcopal Church, regardless of geographic region. “The number of applicants for clergy positions will be fewer than in years gone by,” a 2016 report by the Board of Transition Ministry noted, and “clergy are less willing or able to relocate.”

Such trends have become a common topic at the biannual meetings of diocesan transition ministers from the three Episcopal Church provinces in the center of the country. Spencer was part of those conversations, as well as similar discussions among a group of canons to the ordinary, many of whom were also transition ministers.

Years ago, Spencer said, eight to 10 priests would have applied for an open call, giving the parish search committee plenty of candidates to choose from. Now, those committees may only have two or three candidates – sometimes just one.

Transition ministers in Provinces 5, 6 and 7, along with an informal group of canons to the ordinary that includes Spencer, put their heads together and came up with Flyover Church as an effort to turn those numbers around by touting the unique appeal of ministry and life in these dioceses. Quality of life and low cost of living are among the selling points. The website boasts that these 13 dioceses have 19 research universities, 72 national parks and one “mitten-shaped” state.

The state that looks like a mitten is Spencer’s own Michigan.

“It’s one of the states where, once you’ve been here, you fall in love and it’s probably difficult to imagine life anywhere else,” he said.

But he and other transition ministers also want to convey the ministry potential embedded in the diversity of their communities, from small towns and farmlands to cities and suburbs. These places have unique challenges, which can become opportunities for priests to bring Jesus’ love to people who need it most.

Spencer cited the example of Flint, now known as a ghost town of auto industry downsizing and, more recently, for its contaminated water crisis.

“There is stark need for the kingdom to be built here,” he said.

The Rev. Meghan Froehlich, director of the Episcopal Church’s Office for Transition Ministry, said her office and the board that oversees it is supportive of Flyover Church and any grassroots campaign aimed at raising the profile of the many communities with open calls.

“Anything that helps people be open to the work of the Holy Spirit in their call is really valuable,” Froehlich said.

Spencer said Flyover Church aims to complement the work of the Office for Transition Ministry, not duplicate it. And Froehlich said knocking down geographic stereotypes is a worthwhile goal.

“It can be easy to think that we know about a place from stereotypes or assumptions,” she said. “I think it’s better if we have more information.” The Flyover Church website highlights the “vibrant ministry and the unique gifts of this part of the country.”