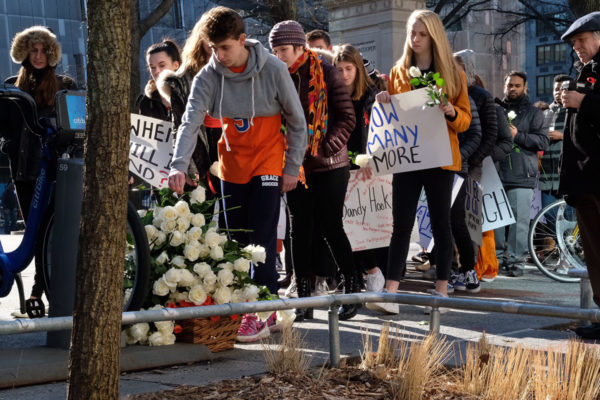 Students at Grace Church School participate in a demonstration outside the school in New York on March 14 as part of a nationwide day of student-led activities calling for action against gun violence. The flowers are in memory of a school aide who was shot and killed near the school last year. Photo: Art Chang, Chang.NYC

[Episcopal News Service] Episcopalians gathered in Springfield, Massachusetts, outside the headquarters of Smith & Wesson Corp. to rally behind protest signs that asked the gun manufacturer to “Stop Selling Assault Weapons.” Episcopalians in Trenton, New Jersey, participated in a 12-hour “Day of Lamentation” over gun violence. Students of Episcopal schools from New York to Florida walked out of class to participate in a nationwide call to action.

Student-led demonstrations around the country and the dozens of separate events at Episcopal cathedrals and churches coincided March 14 to mark one month since the deadly high school shooting in Parkland, Florida. Though independently organized, the variety of events – on what was billed by youth organizers as National Walkout Day – served to underscore a common push for political action to address the seemingly relentless outbreak of mass shootings in the U.S.

“This is the only developed nation in the world that has a gun death problem at the rate we do,” New Jersey Bishop Chip Stokes said in his sermon at Eucharist held at Trinity Episcopal Cathedral in Trenton. “Those of us who oppose it need to get in the face of the problem and cry out in the name of the Lord.”

Such calls have been growing since 17 students and educators were shot and killed Feb. 14 at Marjory Stoneman Douglas High School. A 19-year-old former student has been charged in the massacre. 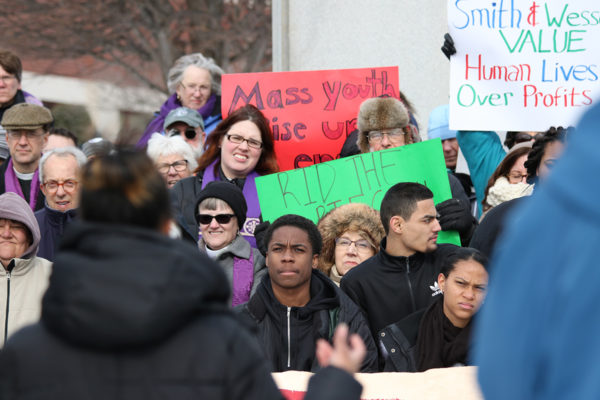 Episcopalians join a interfaith group of demonstrators outside a Smith & Wesson facility in Springfield, Massachusetts, on March 14. Photo: Victoria Ix/Diocese of Western Massachusetts

The series of Episcopal events on March 14, coordinated by Bishops United Against Gun Violence, included services, prayers, the tolling of bells and, in some cases, a more direct form of advocacy.

An estimated 100 or more demonstrators, led by young people and interfaith leaders, including the bishops of the Diocese of Western Massachusetts and the Diocese of Massachusetts, stood for an hour outside the Smith & Wesson facility in Springfield drew “Protect Children Not Guns,” read one protest sign.

Smith & Wesson made the guns used in the mass shootings in Parkland, in Aurora, Colorado, and in San Bernardino, California.

At the end of the hour, the student leaders delivered  three demands to the guards at the Smith & Wesson visitor center. They hope for a meeting with company leaders within the next 30 days. They are asking the manufacturer to stop selling military-grade weapons to the civilian population and to create a community compensation fund to help bear the costs related to gun violence.

Such events shared the spotlight with the day’s widespread classroom walkouts and student-led demonstrations against gun violence. At the Episcopal-rooted Grace Church School in New York, students in grades 4 through 12 linked hands to surround the school, and they placed flowers in memory of a school aide who was shot and killed near the school Nov. 1 of last year.

#marchforourlives starts by remembering beloved member of @GCSchoolNYC gunned down in front on the school on Nov 1 2017. #remember pic.twitter.com/EEJX8swa3Z

Students at Holy Trinity Episcopal Academy in Melbourne, Florida, gathered in the morning at the school’s flagpole to pray for gun violence victims and sign a banner of support for Marjory Stoneman Douglas High School.

A student demonstration also was held at Palmer Trinity School in Miami, Florida.

Our students joined thousands of other kids around the nation today to protest gun violence in #NationalWalkOutDay, a movement sparked after the recent shooting at Marjory Stoneman Douglas High School. pic.twitter.com/R1h2XAlgFS

The events at Episcopal cathedrals and churches range from gatherings for silent reflection to full-day activities underscoring the call to action. Here are some examples:

Bell tolls: St. Paul’s Episcopal Church in Grinnell, Iowa; Grace Church in Sheldon, Vermont, and Trinity Episcopal Cathedral in Portland, Oregon, were among the churches tolling their bells 17 times, one toll for each of the Parkland victims.

The bells toll 17 times on the one month anniversary of the school shooting at #StonemanDouglasHighSchool in #Parkland. #MarchForOurLives #EndGunViolence @TheCrossLobby pic.twitter.com/PHdo2M1pEL

Services of Lamentation: These services, encouraged by Bishops United, have been scheduled in numerous dioceses throughout the day, both at cathedrals and in individual congregations. Bishops United Against Gun Violence has posted information about some of the services. Participants include St. James Cathedral in Chicago; the Cathedral Church of St. Paul in Des Moines, Iowa; St. Luke’s Cathedral in Portland, Maine; Trinity Cathedral in Sacramento, California; Christ Church Cathedral, Springfield, Massachusetts; and All Saints’ Cathedral in Milwaukee, Wisconsin.

Day of Lamentation: The Diocese of New Jersey’s Day of Prayer, Lamentation, Fasting and Silence began at 6:30 a.m. at Trinity Episcopal Cathedral in Trenton and lasted until 6:30 p.m. The service including reading the names of gunshot fatalities. The Diocese of Vermont began at 9 a.m. at the Cathedral Church of St. Paul in Burlington with a full schedule of activities, including music and readings, as well as public prayers offered each hour on the hour.

This was my opening reflection for our Day of Lamentation at @EpiscopalVT Cathedral Church of Saint Paul, Burlington. Snow and ice on the roads, but still people are gathering throughout the day for prayer and contemplation. #EndGunViolence #EnoughIsEnough #prayerandpolicy https://t.co/GbzBw20GOd

The Diocese of Connecticut’s schedule included Eucharist at noon at Christ Church Cathedral in Hartford followed by a lunch where community leaders were to lead conversations about gun violence. A vigil is scheduled for 7 p.m.