McCreath will be the ninth dean of the Cathedral Church of St. Paul, which was established as the cathedral church of the Episcopal Diocese of Massachusetts in 1912. She succeeds former dean John P. Streit Jr. who retired last February after a 21-year tenure. McCreath is the first woman to serve as cathedral dean in the Diocese of Massachusetts. She begins in her new position on Sunday, April 22. 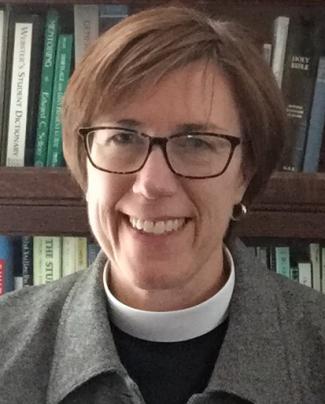 “Amy has exceptional gifts as a leader, with a demonstrated capacity to reimagine congregational identity, build partnerships in the wider community, draw others into shared ministry and navigate institutional systems with the personal heart of a pastor. She is already regarded with esteem by colleagues throughout our diocese. We look forward to welcoming her in this vital role,” Gates said.

McCreath is the rector of the Church of the Good Shepherd in Watertown, Massachusetts, where she has served for eight years. Prior to her call to Watertown, McCreath was, for nine years, co-chaplain of the Lutheran Episcopal Ministry at the Massachusetts Institute of Technology in Cambridge and was coordinator of the Technology and Culture Forum there.

“I am honored to be called to serve as dean of the Cathedral Church of St. Paul and look forward to working with the bishops, the staff and all those serving at and served by the cathedral to amplify the mission of the diocese. At this time of deep moral and political strain in the life of our nation and uncertainty in the lives of God’s people, the mission strategy to which God calls us is urgent. I believe the cathedral can be a great resource to move that mission forward and bring hope and joy to many lives,” McCreath said.

McCreath grew up in Dayton, Ohio, and holds a bachelor’s degree in politics, with a certificate in Russian studies, from Princeton University and a master’s degree in American history from the University of Wisconsin-Madison. She was a high school history teacher before attending seminary at Seabury-Western Theological Seminary. She graduated with a Master of Divinity degree in 1998 and was ordained a priest that same year in the Episcopal Diocese of Milwaukee. She served for three years at St. Christopher’s Church in River Hills, Wisconsin, first as assistant rector and then as priest-in-charge.

In the Episcopal Diocese of Massachusetts, she has been a member of the diocesan Standing Committee (an elected council of advice to the bishop) and a co-convener of the 16 Episcopal churches that comprise the diocese’s Alewife Deanery. She is a member of the Council of Associated Parishes for Liturgy and Mission and has served the wider Episcopal Church on subcommittees of the Standing Commission on Liturgy and Music, the planning team for the 2013 GenX clergy gathering and as coordinator for ministry in higher education for the Episcopal Church’s New England dioceses. She has been a supervisor to many seminary field education students and interns and recently served as director of contextual education at Episcopal Divinity School in Cambridge, Massachusetts, for two and a half years. She and her husband, Brian McCreath, are the parents of twins.

The Cathedral Church of St. Paul, located at 138 Tremont Street in downtown Boston, is the symbol and center of the pastoral, liturgical and teaching ministry of the bishop of the Episcopal Diocese of Massachusetts. The cathedral church welcomes all, seeking to fulfill its mission as a house of prayer for all people. In addition to Sunday morning services in English and bilingual Spanish-English services on Wednesday afternoons, its ministries include The Crossing, an emergent church community of young adults that gathers on Thursday evenings; the Episcopal Chinese Boston Ministry; a Monday lunch program; and MANNA, a ministry with the homeless community in downtown Boston. The Cathedral Church of St. Paul also offers hospitality to its Muslim neighbors who gather weekly there for Friday prayers.