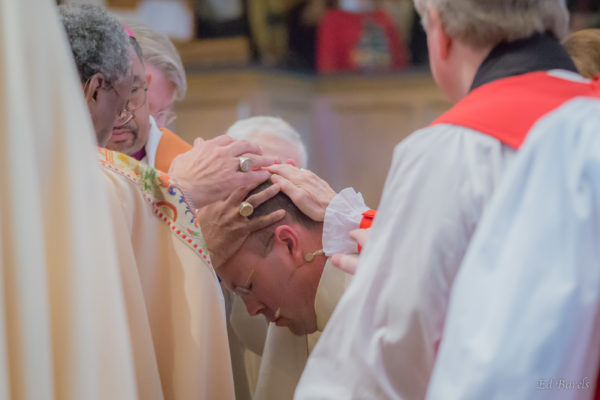 Bishops lay hands on the Rt. Rev. Brian Cole to ordain and consecrate him Dec. 2 as the new bishop of the Episcopal Diocese of East Tennessee at Church of the Ascension in Knoxville, Tenn. Photo: Ed Barels

During the course of the service,  Cole received gifts from friends, churches at which he previously served, and the Very Rev. John Ross, dean of St. John’s Episcopal Cathedral in Knoxville, Tennessee. The gifts included a pectoral cross, bishop’s ring, mitre and crozier. The bishop’s family participated in the service. Son, Jess Cole, served as a lector, and Cole’s wife, Susan Weatherford, played the recorder during communion.

Around 1,000 people attended the ordination and consecration service, and more than 6,700 participated by live stream. The entire service may be viewed on the diocesan website here.

Cole was seated in the cathedra, or bishop’s chair symbolic of the bishop’s office, in a service at St. John’s Cathedral in Knoxville on Dec. 3.

He was elected July 28 on the fifth ballot out of a field of five nominees. He succeeds Young, who served the diocese from 2011 to 2017. Cole served as the rector at the Episcopal Church of the Good Shepherd in Lexington, Kentucky, from 2012 until his election as bishop.

Previously, he served as sub-dean at the Cathedral of All Souls in Asheville for seven years, and as vicar at Church of the Advocate, a worshiping community for homeless in downtown Asheville, for 3 years. He received a Master of Divinity from the Southern Baptist Theological Seminary, with additional studies in Anglican church history in 2001. His Bachelor of Science is in Business Administration, received in 1989 from Murray State University in Murray, Kentucky.

Cole has served on the Executive Council of the Episcopal Church, and has five times been a featured preacher on the popular multi-denominational Day 1 weekly podcast/radio broadcast. Cole taught in the religion department at Warren Wilson College, Swannanoa, North Carolina, Wake Forest University School of Divinity in Winston Salem, North Carolina,, and Luther Seminary, St, Paul., Minnesota. He served on the program staff of the Appalachian Ministries Educational Resource Center (AMERC) in Berea, Kentucky, for seven years before his ordination as a priest.

The Episcopal Diocese of East Tennessee is approximately 14,350 square miles in area, comprising 34 counties in East Tennessee and three counties in North Georgia with the Cumberland Plateau as the western border. There are 50 congregations and worshiping communities servicing nearly 16,000 active members. The population of the diocese is concentrated in the major metropolitan areas: Chattanooga, Knoxville and the Tri-Cities area, which includes Kingsport, Bristol and Johnson City, areas totaling more than 2.4 million people according to Tennessee state government statistics.