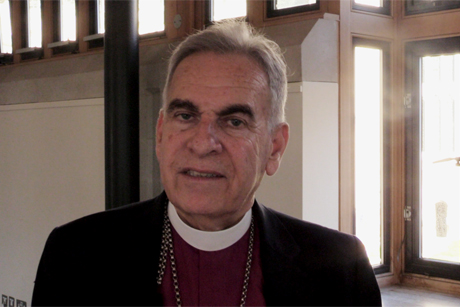 Archbishop Suheil Dawani, primate of Jerusalem and the Middle East, spoke to the Oct. 2-6 Primates Meeting about reconciliation. Photo: ACNS

[Anglican Communion News Service] Archbishop Suheil Dawani of Jerusalem and the Middle East has briefed his fellow Anglican Primates on his province’s reconciliation ministry. The archbishop, whose own diocese takes in the countries of Jordan, Palestine, Israel, Syria and Lebanon; and whose province includes Iran, Cyprus and the Gulf, and Egypt with North Africa and the Horn of Africa, has considerable experience of reconciliation work.

“This morning I had the opportunity to update the primates on the situation we have in Jerusalem – a city which embraces three religions,” Dawani told the Anglican Communion News Service, “and I said something about how we build trust and hope amongst the communities who live there.”

He said that reconciliation was “a priority” for Anglicans, and added that the work could be done through the church’s work and mission. “I believe strongly that through the work of our schools and institutions we can reach people and we can build up a trust and friendship amongst all these communities.”

The archbishop, who was attending the his first Primates Meeting since being elected as the lead bishop in his province, said: “ At the Primates Meeting we had wonderful fellowship amongst everybody. And this is, for me, a week of learning from each other, exchanging experiences and also learning what other provinces are doing.

“I believe that the interaction that happened with all the primates was very helpful in a very good Christian spirit. And I have to say ‘thank you’ to Archbishop Justin, because he is a good facilitator and I am really confident that he will lead the whole Anglican Communion to a place of getting together to be reconciled with each other. This is my wish and prayer.”

Reconciliation is one of the three priority areas of the Archbishop of Canterbury Justin Welby. It was on the agenda of the Primates Meeting at the request of the communion’s leaders who took part in the meeting this week in the grounds of Canterbury Cathedral, England.