[Diocese of Newark] With sadness, members of the Diocese of Newark announced the passing of the Rt. Rev. Jean Rigal Elisee, who served as the diocese’s supply bishop, assisting with confirmations from 2005 to 2007. His funeral was Sept. 30 at Grace Church in Newark, New Jersey, followed by a repast. It was preceded by a viewing that morning and the prior evening. 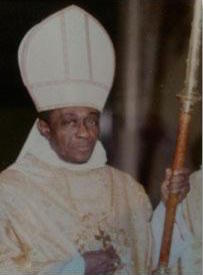 Born to Joseph Elisee and Melicia LaBorde on Sept. 26, 1927 in Leogane, Haiti, Elisee died Sept. 20, at St. Barnabas Hospital in Livingston, New Jersey, six days before his 90th birthday. He was the oldest of 12 children, with three siblings and eight half-siblings.

After receiving his masters in divinity from the former Philadelphia Divinity School in Philadelphia, Elisee first became an ordained priest in the Diocese of Haiti. He was then sent by the Domestic and Foreign Mission Society as missionary to Monrovia, Liberia. In 1980, he was appointed as bishop of The Gambia and the Rio Pongas in the province of West Africa to be a missionary of the Episcopal Church and the United Society for the Propagation of the Gospel in London, England. He spent more than 22 years in mission in West Africa, serving in Gambia, Guinea, Sierra Leone, Senegal, Nigeria, Ivory Coast, Guinea Bissau and Liberia.

Prior to leaving Haiti for his mission in West Africa, he married his wife Anita, who worked by his side as a missionary teaching at the church nursery, developing strong relationships with the local people in each country and being actively involved in the church.

In 1986, Elisee came to the United States and served for several years in the dioceses of New York and Newark as a supply bishop assisting with confirmations until his retirement.

Elisee is survived by his wife, Anita, and his four children Ruth, Raynald, Joseph and Monique. He also has four grandchildren: Michelle, Brittney, Jordan and Chanel. He is also survived by his brothers, Martelly, Roland, and half-brothers and half-sisters, Nicholas, David, Jean-Baptiste, Pauline and Catherine. He was preceded in death by his parents and brother Ovide, half-brother Ribeau and half-sisters Ann and Mamie.

Good and gracious God, the light of the faithful and shepherd of souls, you sent your servant Jean to be a bishop in your church to feed your sheep with your word and to guide them by his example; give us the grace to keep the faith he taught and to follow in his footsteps. We entrust him into your unfailing mystery of love and hope through Jesus Christ our Lord. Amen.