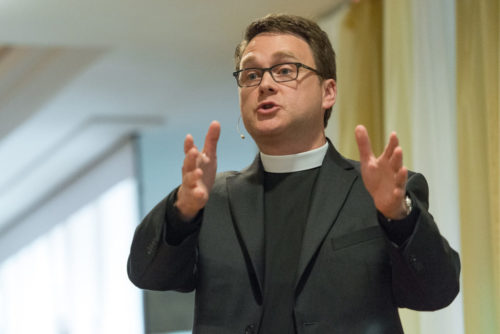 The Rev. Kevin S. Brown, rector of of the Church of the Holy Comforter in Charlotte, North Carolina, was elected July 15 as the 11th bishop of Delaware. Photo: Diocese of Delaware

Pending the canonically required consent of a majority of the Episcopal Church’s diocesan standing committees and bishops with jurisdiction, Brown, currently rector of the Church of the Holy Comforter in Charlotte, will be ordained and consecrated on December 9 by Presiding Bishop Michael B. Curry. Delaware State University in Dover will be the site of the service.

He was elected on the fifth ballot, and clergy and lay delegates cheered the announcement. Brown received 65 votes in the lay order and 33 votes in the clergy order. An election on that ballot required 52 lay votes and 32 clergy votes. The Rev. Patricia Downing of Wilmington, one of the five final candidates for bishop, moved that the election be declared unanimous.

Contacted at his home in Charlotte, Brown said he and his wife, Caroline, were following the balloting on Twitter while working on a 1,000-piece jigsaw puzzle to distract them.

“It’s humbling and inspiring,” he said, describing his election as “a moment when time seemed to stand still.”

He quickly acknowledged the other four candidates on the slate. “I have heard time and time again that Delaware was graced with a remarkable slate of candidates,” he said, citing the “brilliance, energy and the spirit of all the candidates.”

Brown grew up in Asheville, North Carolina, and studied mathematics and psychology at Duke University. He completed his M.B.A. while in the U. S. Air Force, worked in finance and marketing at FedEx, and launched an investment firm before his call to the priesthood.

At Holy Comforter, he led the merger of separate English and Spanish preschools into a single groundbreaking school focused on bilingual education and dedicated to access for low-income and immigrant families. He previously served as rector of Grace Episcopal Church in Paris, Tennessee.

His education includes an M.B.A. from the University of West Florida and a Master of Divinity from The General Theological Seminary in New York City. His wife, Caroline, is an accomplished artist and they have two daughters in college in North Carolina.

Brown will succeed the Rt. Rev. Wayne P. Wright, who retired in February 2017. He will shepherd 9,300 Episcopalians in 34 congregations throughout Delaware. He also will serve as chief pastor to the diocese’s clergy and deacons and often takes a leadership role in social justice issues on a statewide level.

The search process began in the summer of 2016, with the appointment of lay and clergy search committee members. The Rev. Martha Kirkpatrick, rector of St. Barnabas’ Episcopal Church in Wilmington, and Steven Boyden of Christ Church Christiana Hundred in Wilmington, co-chaired the search committee. The search team considered more than 50 applicants who had responded to the diocesan profile.

The Rev. David Andrews, rector of Saints Andrew and Matthew in Wilmington, and Sue Taber of St. David’s in Wilmington, co-chaired the transition committee.

The other four candiates were:

The five candidates participated in three “walkabouts” throughout Delaware June 28-30, appearing before a congregation each evening to answer questions. About 600 people attended the three gatherings.