[Diocese Northwest Texas] It is with profound sadness that the Diocese of Northwest Texas shares news of the death of a great friend and an outstanding icon of lay servanthood. Katherine Elizabeth (Betty) Davis Gilmore, of Midland, Texas, died peacefully on the afternoon of May 9, 2017. 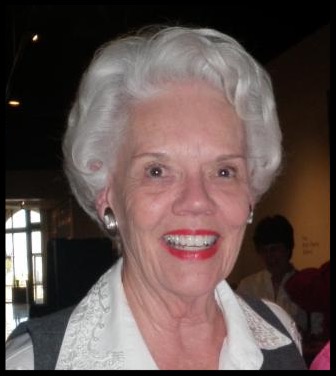 Betty had recently been diagnosed with a serious illness, and was sent to the University of Texas M.D. Anderson Cancer Center for further diagnostics and possibly treatment. She was transferred back to Midland recently to be with her family, and died at home, surrounded by her loved ones.

She leaves behind her husband of 60 years, Willis (Bill), and four children: Kathy Shannon of Midland; Karen Anderson and husband, Steve, of Fort Collins, Colorado; Trey Gilmore and his wife, Susan, of Houston, Texas; and Laurence Gilmore of Denver, Colorado. She was the grandmother of eight grandchildren and three great-grandchildren.

Betty was born September 3, 1933, in Baton Rouge, Louisiana. Her childhood years were spent in New Orleans, Louisiana, while attending Louise S. McGhee School.  She enjoyed her summers at Camp Waldemar where her daughters and granddaughters continued the tradition. She later attended and graduated from The Hockaday School in Dallas, Texas.  She studied English Literature at Randolph-Macon Woman’s College and graduated from the University of Texas at Austin in 1955. She was a member of the Pi Beta Phi sorority in which she remained actively involved for many years.

If you were “friends” with Betty on the web, you may have encountered her personal profile on LinkedIn, which listed her role, her “job,” as an “Independent Non-Profit Organization Management Professional,” a description that was quite apropos. She used that knowledge and experience to be civically active in Midland, where she served on the Board of Manor Park, a local retirement facility, and was a charter member of the Midland Symphony Guild, where she formulated the organization’s bylaws with fellow Guild charter member, Harriet Herd. She and Mrs. Herd continued to create bylaws for various organizations throughout the community.  Betty participated actively in Junior League, Friends of the Library, and the Samaritan Counseling Center.

For numerous decades, Betty served the Episcopal Diocese of Northwest Texas, and the Episcopal Church, in almost every capacity in which a layperson could serve. The executive secretary emeritus for the diocese, Carolyn Hearn, recently spoke lovingly of Betty, by reflecting, “Betty was the greatest mentor I’ve ever had. She took me under her wing when I was hired as the executive secretary, and kept me there for 37 years.” Betty’s grace and knowledge were exceptional. She lit up every room she entered with her gracious smile and cheerful personality. She was, indeed, a great Southern lady and an outstanding servant leader, setting an example for what lay leadership could be. The April 2017 diocesan newsletter, The Adventure…on the go, stated, “She has always answered the call of service to the diocese willingly and happily. Her beautiful white hair and equally sparkling smile can’t compare to her gracious personality.”

In her decades of service for the diocese, Betty served as parliamentarian for the annual diocesan convention for many years, as well as serving as the chair of the Constitution and Canons Committee, during which she oversaw the complete re-write of the diocesan Constitution and Canons. Betty also served on the Standing Committee, the committee in charge of ecclesiastical oversight for the diocese; the Commission on Ministry, which assists the diocese with screening and approval of candidates for the priesthood and diaconate; as well as serving as the diocesan ECW president. She was a lifelong Episcopalian and active member of St. Nicholas’ Episcopal Church, in Midland, serving on the vestry, as well as serving as a lay Eucharistic minister, a lector, and through assisting with the planning and execution for the construction of the new church building on the Loop. Additionally, she served for numerous years on the Province VII Council, as the Secretary of Province VII of The Episcopal Church.

As a result of her long years of service and leadership, Betty was awarded an honorary doctorate degree in humane letters in 1999, from the Seminary of the Southwest in Austin, Texas. The citation that accompanied Gilmore’s honorary degree remarked, “Highly organized, skillful facilitator and keen yet gracious parliamentarian, you have been the epitome of lay ministry in all levels of the Episcopal Church for decades. You have left your mark not only on your parish, St. Nicholas’, Midland, and the Diocese of Northwest Texas, but also Province VII and the national church.” Again, in 2006, Betty was honored by being named the Diocese of Northwest Texas Honored Woman at the national Episcopal Church Women’s (ECW) Triennial meeting, which ran concurrently with the 75th General Convention of The Episcopal Church, in Columbus, Ohio. She was identified by the National Episcopal Churchwomen’s Board, with other women throughout the Episcopal Church, as “modeling the Christian life.” The October 2006 diocesan newsletter reported, “She walks in the ways of God in the church and the community. She uses her God-given gifts in all she is and in all she does. Betty has graciously and faithfully served her parish, diocese, province and the national church in ways too numerous to mention here.” It goes without saying that her presence, wisdom, and grace will be greatly missed, but her untiring service to her family, friends, church and community will continue as an inspiration to all who knew her.

A memorial service was held May 17 at St. Nicholas’ Episcopal Church in Midland.

Online condolences may be offered here.The Gilmore family suggests memorial gifts may be sent to: