[Episcopal Diocese of Maryland] Every preacher has heard this or something similar: “Politics has no place in the pulpit.” It would seem we’ve heard this sentiment more in the past year. It’s on the mind of many preachers these days.

So the Rt. Rev. Eugene Taylor Sutton, bishop of Maryland, and the Rt. Rev. Chilton R. Knudsen, assistant bishop, recently gathered nearly 60 clergy at the Claggett Conference Center in Adamstown, Maryland, to consider preaching that’s pastoral, prophetic and political. They heard from two Episcopal clergy who have preached to presidents, government leaders and politicians of all stripes.

The Rev. Luis Leon, rector of St. John’s, Lafayette Park, across from the White House, and the Rt. Rev. Nathan Baxter, retired bishop of Central Pennsylvania, shared their experiences and how they have wrestled with preaching that’s faithful to the gospel message. 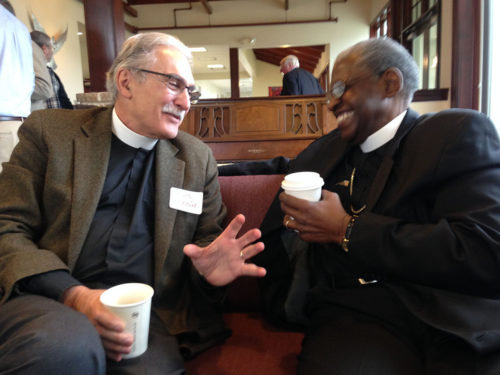 The Rev. Luis Leon, left, and Bishop Nathan Baxter share a light moment before their presentations to Maryland clergy on preaching about political issues. Photo: Diocese of Maryland

Baxter, dean of the Washington National Cathedral from 1992-2003, said, “I used to say the Canterbury pulpit [at the National Cathedral] was a bully pulpit, but not a pulpit to bully people.” God loves all people, he said, even those who disagree with us.

Baxter acknowledged some congregations call clergy and expect them to speak to political issues. Even so, he said, “this is hard and complicated work” pointing to the various personalities and power structures in congregations.

“A pastor is one who cares for the souls of [all] those in our care,” he said.

Both men shared wisdom from their teachers, including the late William Sloane Coffin, Jr., Bishop John Spong and Walter Brueggemann.

Leon, who’s preached to five presidents, said Coffin was probably the most political preacher he ever encountered. He shared some advice from one of Coffin’s preaching classes: “No souls are saved after 20 minutes, but in the Episcopal Church it’s more like 15 or 13 minutes.”

That moment of levity was followed by Leon’s advice: “Preach for people. Not at them.” Then he passed on a suggestion for approaching controversial subjects: “I offer this for your consideration…” He said our task as a preacher “is to help people develop their own theological system.”

One important point, Leon said, was to ask himself would he say the same thing about a politician if that person was sitting in the pew? “If not, I don’t say it,” he said. “That would be a cheap shot.”

As an example, he noted a sermon on deportation. He preached on the topic as a Biblical issue, citing the numerous references in the Bible to hospitality, welcoming the stranger and the alien. Leon said he never named the politician involved in the deportation controversy.

Baxter said Sutton’s pastoral letter, “One Nation Under God,” written in February, 2017, as an aid for the laity on how to listen to a preacher, is a good resource in Christian formation.

Both presenters agreed that you can preach pastorally and prophetically about political issues by staying true to the gospel and true to the words and life of Jesus as messiah and Christ.

And they stressed the importance of collegiality, of collaborating or checking in with colleagues when tackling tough subjects. Bishop Knudsen urged the clergy to call one another and support each other in their preaching work.

Leon was emphatic that too many people are putting more faith in government than God.

“I’m concerned that we are looking to government for salvation as our source of power,” he said. Leon described a conversation with the Rev. Robert Jeffress, a Southern Baptist, who preached at St. John’s at the beginning of this year’s presidential inauguration events. He said he asked Jeffress if he’d changed his profession because Leon heard him talk “more about government than the gospel.”

The Rev. Adrien Dawson, rector, All Saints, Frederick, Maryland, spoke of the challenges of   preaching to a “purple” congregation, one that’s red and blue politically. She heard from the presenters it’s “important to maintain relationships [with her parishioners] at the deepest levels while also maintaining accountability to the gospel.”

The Rev. Ramelle McCall, diocesan missioner to west Baltimore and priest in charge, Holy Trinity, said his takeaway was, “Being loving of those with different opinions.”

The Rev. T. Stewart Lucas, rector, Nativity Holy Comforter Episcopal Lutheran Churches, said he learned “prophetic preaching is not just about words from the pulpit. It’s about relationships and building trust with those who differ from us.”

The presenters were asked for last words of wisdom.

— The Rev. Dan Webster is a priest in the Diocese of Maryland.