The 35-tracker, 147-kilowatt solar array is expected to produce slightly more energy than is consumed on the Rock Point property in Burlington, Vermont. Burlington Electric credits the diocese for the excess energy. Photo: Episcopal Church in Vermont

[Diocese of Vermont] The Episcopal Church in Vermont recently completed its purchase of the Solar Installation (aka the Solar Farm) at Rock Point, the diocese’s 146-acre center in Burlington best known for its school, conference center, community gardens, and hiking trails. The 35-tracker, 147-kilowatt solar array, which was previously under the ownership of AllEarth Renewables, was originally valued at close to $1million. The diocese acquired it for $269,700 with the help of early contributions to the Rock Point Partnership Campaign—an ongoing initiative to preserve and improve Rock Point—and a loan from the Bishop Butterfield Loan Fund.

The investment is expected to produce slightly more energy than is consumed on Rock Point and generate a financial benefit of more than $40,000 annually, a portion of which will be used to repay the Bishop Butterfield Loan, even as other pledges and gifts to the partnership campaign help reduce the loan balance. 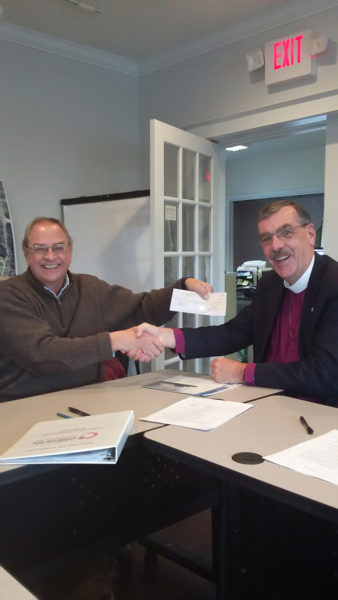 “Five years ago, the Trustees of the Diocese of Vermont—title-holders to Rock Point—entered an agreement with AllEarth Renewables, Inc. for the installation of the Solar Farm,” said Vermont Bishop Thomas C. Ely. “Our long-term goal was to purchase rather than lease it, and we are glad to have achieved that goal on the fifth anniversary of the installation.”

“Care for the environment is an important aspect of our message in the Jesus Movement. The Episcopal Church in Vermont remains committed to environmental stewardship not only in Rock Point but also throughout the wider community,” said Ely.