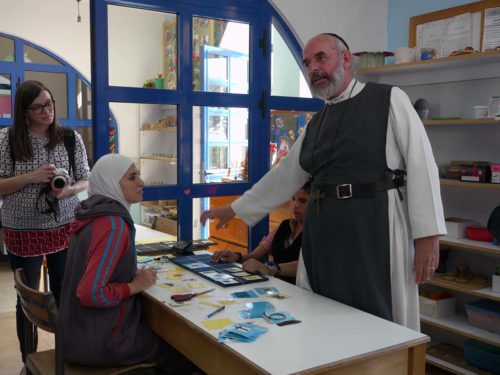 The Holy Land Institute for the Deaf provides a mostly one-on-one education for its students, who learn the fundamentals of sign language by tactile learning. Photo: Lynette Wilson/Episcopal News Service

[Episcopal News Service] For more than 50 years, the Holy Land Institute for the Deaf has worked to enable deaf, deaf-blind children, hearing impaired as well as children with other sensory and physical disabilities, for inclusion and participation in their families, communities and societies in a meaningful way. It is the only school in the Middle East to provide education to people with congenital hearing loss, and in 2001 became the first boarding school in the region to accept deaf-blind children.

Some 120 students, ages 3½ to 21, 90 percent of them residential, study at the Holy Land Institute for the Deaf’s campus in Salt, Jordan, a 50-minute drive the from capital, Amman. When new students arrive, they are typically three to five years behind in language development. Each student learns sign-language fundamentals through play-based learning, after which they are placed in classes according to age and educational ability.

“We don’t see ourselves as a school for deaf children, we are a sign-language media school,” said executive director, Brother Andrew A.L. de Carpentier, who came to the institute in 1977. The school teaches sign language in Arabic, French and English, he said, adding that the Arabic spoken in Jordan contains more than 20,000 signs. 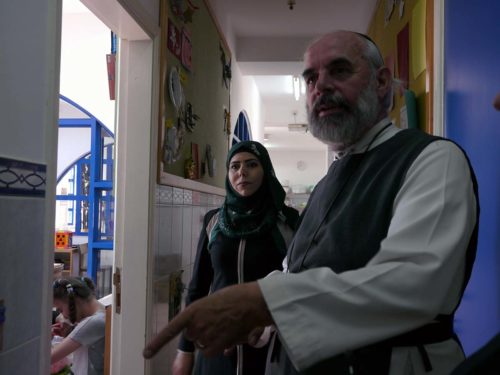 Brother Andrew A.L. de Carpentier, executive director of the Holy Land Institute for the Deaf, leads Episcopalians on a tour of the institute in Salt, Jordan, showing them a ruler for tactile learning and a sign outside marking a classroom in sign language. Photo: Lynette Wilson/Episcopal News Service

Originally from the Netherlands and raised in the Dutch Reformed tradition, de Carpentier began working with the deaf in Lebanon, where he also became an Anglican, in the 1970s.

Working through its network, the institute has helped to establish 60 partner schools in the Middle East, including in Syria, Iraq, Yemen, Egypt, Palestine, as well as in Afghanistan and Pakistan, he said.

“It used to be that they got a sixth-grade education and vocational school, and we changed that in the Middle East,” said de Carpentier. Now students go on to high school and 50 have gone on to college.

“The ministry there is so remarkable for taking care of disabled children and their families,” said the Rev. Canon Robert Edmunds, the Episcopal Church’s partnership officer for the Middle East. “The impact is way beyond each child … when you multiply that by the number of families involved and how those extended families are aware of this ministry, the imprint – of the good of what the Christian church is doing there, and the training and the education and the hope for the future these kids have – is incalculable.”

In Jordan, as in all Middle Eastern countries, Muslims are a majority and Christians make up a small minority; proselytizing is prohibited. The institute accepts students, many of them from poor families, from throughout the country. 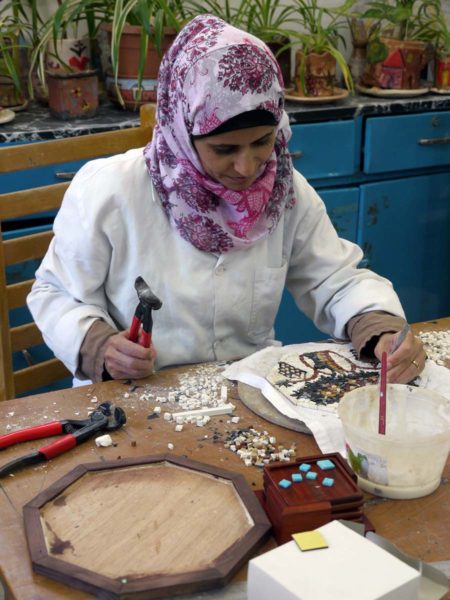 A woman works on a mosaic to sell in the gift shop at the Holy Land Institute for the Deaf. Photo: Lynette Wilson/Episcopal News Service

The school operates on a $1 million annual budget, receiving money from the Jordanian government and grants, private donations and assistance from the Friends of the Holy Land Institute for the Deaf. It employs 34 teachers, 20 percent of them deaf and many of them educated at the school, and volunteers. Over the years, cultural attitudes toward the disabled have changed, particularly since the United Nations called for the International Year of Disabled Persons in 1981, said de Carpentier.

Still, difficulties exist. With the long-running civil war in Syria and increased violence in Iraq, partner schools in those countries no longer function, but the institute is providing services to children and their families in refugee camps in Jordan, a top hosting country for people displaced by violence and persecution.

The Holy Land Institute for the Deaf is part of the Episcopal Diocese of Jerusalem, which includes Israel, Palestine, Jordan, Syria and Lebanon. A long-time partner of Episcopal Relief & Development, the institute has been working with a network of local organizations to establish a satellite center in the largest refugee camp, Za’atari. With increasing need and an invitation from local authorities, it is opening an additional center in the second largest refugee camp, Al-Azraq. This new center aims to serve approximately 1,500 people with disabilities.

“It is especially heartening to see how the Holy Land Institute for the Deaf and the Diocese of Jerusalem are not only remaining steadfast in their support of families and children in Za’atari camp but replicating this successful program in Azraq camp as well,” said Nagulan Nesiah, Episcopal Relief & Development’s senior program officer for disaster response and risk reduction. “After five years of crisis in Syria with no sign of easing, our local partners in the region who were active before the conflict are still helping to the best of their ability, and we continue to support them.”

– Lynette Wilson is an editor/reporter for Episcopal News Service. She visited the Holy Land Institute for the Deaf in Salt, Jordan, during an October trip for religion writers and bloggers sponsored by the Jordan Tourism Board and Royal Jordanian Airlines.