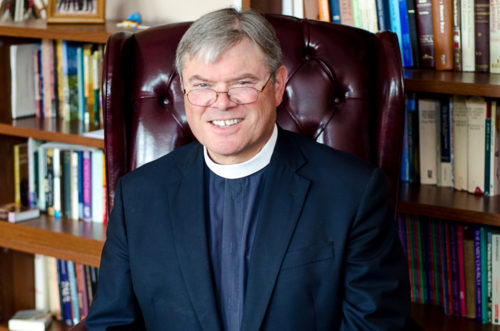 [Trinity School for Ministry press release] The Board of Trustees of Trinity School for Ministry in Ambridge, Pennsylvania on Dec. 6 unanimously appointed the Rev. Henry L. Thompson (Laurie) as the seventh dean/president of the seminary, effective immediately. Last May, Thompson was appointed as the interim dean/president. This action of the board makes the appointment permanent. Plans are underway for Thompson to be installed as dean/president in early February. The dean/president is the senior administrator and chief academic officer of the seminary and is responsible for all of the daily operations and fundraising efforts.

“After observing Laurie’s capable leadership as interim dean/president over the past six months, the board is confident that Laurie is God’s man for Trinity in this season,” remarked Douglas Wicker, chairman of Trinity’s board. “His intimate knowledge of and love for the school are important as we move forward. Many of the faculty and staff have also expressed their confidence in and support of Laurie’s leadership in this role.”

Trinity began a search for a new dean/president when the Very Rev. Dr. Justyn Terry, Trinity’s sixth dean/president, announced his plan to return to England. An international search identified a number of impressive candidates, but the board concluded that none of them was the right leader for this season. Thompson was appointed as an interim leader to keep
the affairs of the school running smoothly while the search for a permanent leader continued. Shortly after this interim appointment was made, many of the board members began to ask if the Spirit was guiding them to install Thompson as the next dean/president. After much prayer, both the board and Thompson feel that this is, indeed, the Lord’s will.

“Every prayerful moment in the recent months has confirmed in my heart and mind that God is calling me to this ministry and I am thrilled and honored to accept this appointment,” said Thompson. “The world of theological education is shifting and Trinity is at the forefront of transforming the way Christian leaders are trained for mission, I am so excited to be a part of it! I would like to give my thanks to my family and the students, faculty, board, and staff of Trinity for their love, support, and prayers.”?

Thompson first came to Trinity in 1997 after spending 19 years in parish ministry. He has led the Doctor of Ministry program since 2001 and has also served as the dean of administration and most recently as the dean of advancement where he played an important role in the “Reach for the Harvest” campaign which raised $15.4 million for various strategic initiatives. He is married to Mary W. Thompson and they have three adult children and 9 grandchildren.

Trinity School for Ministry is an evangelical seminary in the Anglican tradition. Begun in 1976, the seminary has trained more than 1,200 graduates and many others who serve in ministries all over the world. As a global center for Christian formation, Trinity continues to produce outstanding leaders who can plant, renew, and grow churches that make disciples of Jesus Christ.