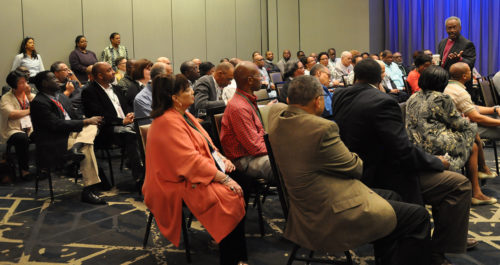 [Episcopal News Service – Houston, Texas] How to be the church in the world as it is today was the focus of a wide-ranging Nov. 15 discussion between Presiding Bishop Michael Curry and other participants in the Episcopal Church’s International Black Clergy Conference.

Curry acknowledged that the church and society face many challenges but, he said, the church has a role to play, beginning with concrete actions that show the world its dedication to reconciliation.

In response to a question about how the church should approach the issue of reparations to Native Americans, African-Americans and Japanese Americans, Curry described a path for how the church might help U.S. society address its collective past.

That path is about “trying to move in a direction where the work that leads to reconciliation is linked to repentance and that repentance is linked to genuine actions that both, on the one hand, acknowledge the past and then seek to do something to remedy it.” 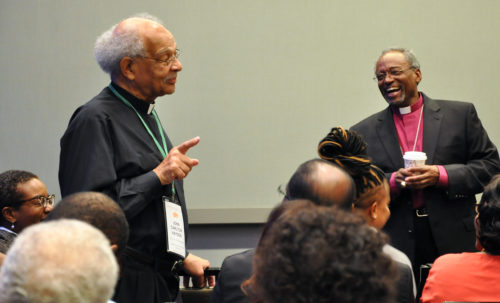 The Rev. John Carlton Hayden of Washington, D.C., recalls a moment when both he and Presiding Bishop Michael Curry were young priests. Hayden spoke during a Nov. 15 open mic session during the evening prior to the start of the Nov. 16-19 Episcopal Church International Black Clergy Conference in Houston, Texas. Photo: Mary Frances Schjonberg/Episcopal News Service

Curry suggested that the church can help to lead the way toward “creating a new future” beyond what he called the painful part of America’s history. Some dioceses have been addressing their past and are taking the challenge seriously, he said, adding that ignoring the hurts of the past only means the pain will rise up in other ways.

For example, he said, “part of the culture is ramping up to create a bad history for Latino Americans.”

“We have to stop that,” he said. “We’ve got to name it and then show a way forward. We’re in an environment now where that’s going to be all the more important.”

When the Rev. Gayle Fisher-Stewart, assistant rector at Calvary Episcopal Church in Washington, D.C. asked Curry how to stop it, he asked, “what do you think?”

“I don’t think we have anything to lose by speaking the truth of what is,” she replied. “We’re going to be damned if we do and damned if we don’t” so Episcopalians, who are in a good place to start this work, need to “take the cross and follow it wherever we need to go.”

The Rev. Ronald Spann, assisting priest at Christ Church in Grosse Pointe, Michigan, said that the church ought to find its allies who will join in the work needed to “pull us out of the toxicity” that comes with divisions.

“We have a fresh opportunity to pick up where Martin Luther King left off,” he said.

The Rev. Kimberly Lucas, rector of St. Margaret’s Episcopal Church in Washington, D.C., said she recently told her congregation that the Episcopal Church spent too much time patting itself on the back about its progressive nature while “ignoring the demons that were stirring in our midst.” 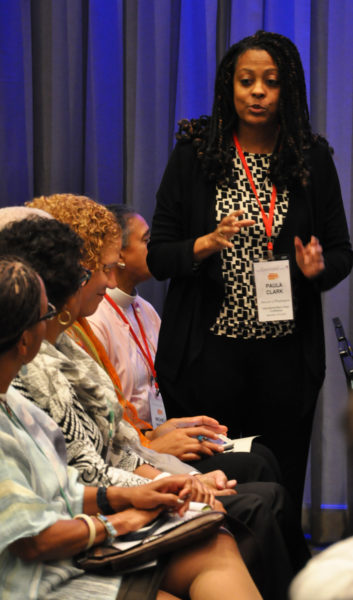 The Rev. Paula Clark, canon for clergy development and multicultural ministries in the Diocese of Washington, speaks about the response to a Nov. 12-13 incident of vandalism at Church of Our Saviour in Silver Spring, Maryland. She made her remarks during an evening discussion prior to the start of the Nov. 16-19 Episcopal Church International Black Clergy Conference in Houston, Texas. Photo: Mary Frances Schjonberg/Episcopal News Service

Instead, she challenged parishioners to “figure out ways to be Jesus for them” and “support our white brothers and sisters of goodwill in doing the work that only they can do” and reflect how society strives to preserve “the division between those who are white and suffering and everybody else of color – to keep those people on opposite sides of everything, so much so that those people would vote against their own interests.”

Curry urged the participants to remember a basic principle of community organizing that stresses building one-on-one relationships out of which will emerge an agenda for what common issues and concerns need to be addressed.

“It may be that some of the most radical stuff that we can do in this cultural context is to create the context for real relationships between people who are profoundly different,” he said, noting that sociologists say America is becoming more and more “balkanized, fragmented and segregated.”

“The truth is American society – the democratic experiment – actually depends on us building networks of real human relationships with people who are unlike us, and that is a real challenge,” he said.

Curry cautioned that while some people might think evangelism has nothing to do with the things that the group spent just over an hour talking about, it in fact has everything to do with it because “evangelism is not about getting more people like us to be us.” Evangelism is, instead, about helping the church to create and shape a loving and profoundly diverse community of God as a witness to the world, he said, and then helping the world look like that, too.