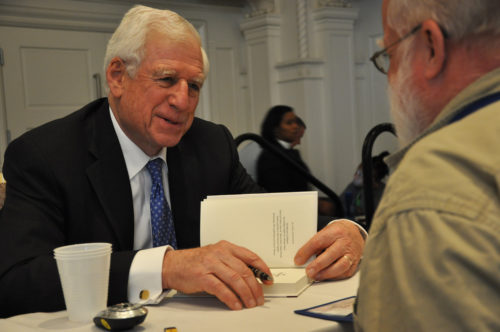 John Danforth signs a copy of his book “The Relevance of Religion: How Faithful People Can Change Politics” for Diocese of New York Bishop Andrew Dietsche after Danforth’s Sept. 16 presentation to the House of Bishops. Photo: Mary Frances Schjonberg/Episcopal News Service

[Episcopal News Service – Detroit, Michigan] Calling for “an expansive ministry to America,” former Missouri Republican Sen. John Danforth called on the Episcopal Church Sept. 16 to combine its pastoral and prophetic voices into “a healing ministry to a nation that needs healing.”

Danforth, an Episcopal priest, lawyer and author who served in the U.S. Senate from 1976-1995, told the House of Bishops that “this longtime politician knows that America needs us; this devoted Episcopalian believes that Jesus calls us” to act boldly in the current political and civic climate.

Episcopalians “should be evangelists to all Americans, especially to the most idealistic Americans, to young people who want to change the world. We should be the voices that call them to do just that,” he said.

The call to Episcopalians to do this ministry can be seen as an opportunity created by current circumstances in the United States, or as the patriotic duty of citizens or as a God-given calling, or as all three, Danforth said.

The former senator and United Nations ambassador decried what he sees as politicians appealing to people’s fear and capitalizing on society’s trend of valuing self-interest above the common good. Danforth argued that the United States has lost sight of its founders’ commitment to what they called “virtue,” which he described as putting the common good above personal interest. The Episcopal Church must call people back to that virtue because it seems no one else is, he added.

“The model for us is the cross, and that is the opposite of egocentricity,” Danforth said.

If Jesus calls on us to love our enemies, he said, then we should surely love people with opposing ideas. “A political opponent is not an enemy, not in this country,” he said, adding that hatred is what is disturbing in politics today. 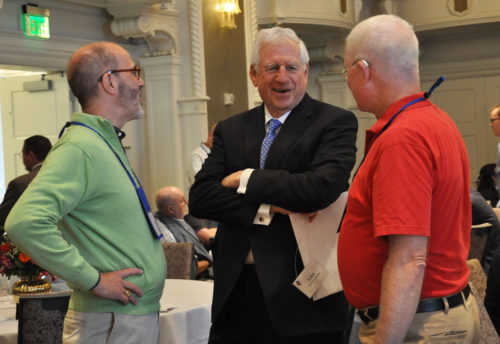 He gave the bishops a three-pronged plan for what he said had to be a ministry of reconciliation. First, the church must adopt and announce a clear message about “what precisely we intend to be” and “create a short, clear statement of what we intend to do.” Second, the church must develop and pursue tactics to implement the message because “we will have to be more than a slogan.” Thirdly, “our presiding bishop gives us a unique opportunity to speak powerfully beyond our walls” and he should be empowered to do so.

“He is a very special talent and we should not bury this talent,” Danforth said. “I have never known anyone in the Episcopal Church who is better able to preach the gospel to the world than our presiding bishop.”

As the bishops began to applaud, Danforth added, “Let’s make him the public face of church. Every day in the office would be better spent on the road. We should free him from administrative and ‘churchy’ responsibilities and find ways to expose him to the widest audience.”

Danforth acknowledged that Episcopalians disagree over when the church must raise its prophetic voice and when it must use its pastoral voice.

He used the example of a group of clergy that confronted police officers demanding that they publicly repent in the wake of the killing of Michael Brown in Ferguson, Missouri. That demand may have felt prophetic, he said, but it prejudged the facts and assumed that those individual officers were in need of repentance. A pastoral approach would have assumed that the officers were good people and would have appealed to that goodness, he said. 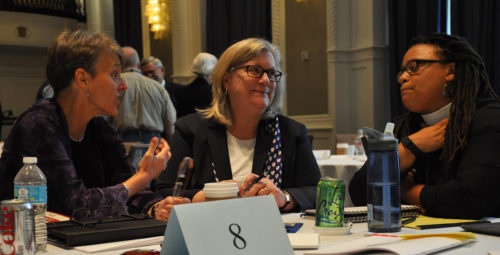 Jackson agreed, saying that many times “the common good has not included a lot of people.” Thus, she said, she sees a large part of her ministry as advocating in the Georgia Legislature and elsewhere because, as a young seminarian and priest, she was inspired and received an example of advocacy from the work of the church. And she learned that advocacy is about relationships.

“I think that’s what we do as a church,” she said. “We figure out how to talk to people who are different from us, how to compromise, but also how to come together even though we may sit in very different camps.”

Jennings said that the Episcopal Church’s presence in 17 countries means that Danforth’s call could be lived out in many different political systems.

She also countered one of the senator’s suggestions that the church spends too much time passing resolutions that he said don’t amount to much in the end. “We can help to change the tone [of political debate] and we can also advocate,” she said.

“We probably sometimes get into issues that maybe would be best left to others but, when we choose certain advocacy positions to take, my experience has been that it has been to be able to fulfill our baptismal covenant to seek and serve Christ in all people and to respect the dignity of every human being,” Jennings said.

The House of Bishops is meeting at the Westin Book Cadillac Hotel in downtown Detroit. Some bishops and others are tweeting about the meeting using the hashtag #hobfall16.