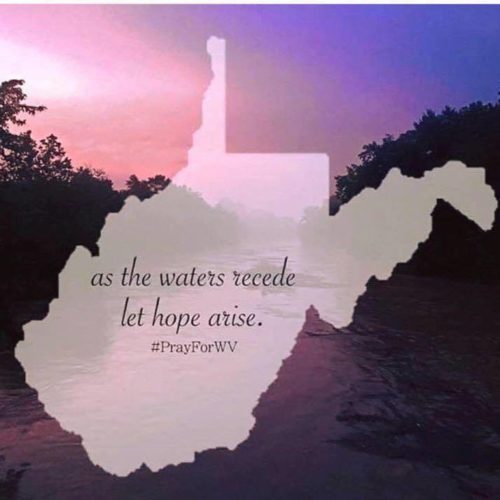 A June 27 posting on the Facebook page of St. James’ Episcopal Church, Lewisburg, caught the spirit of the post-flood days in the Greenbrier Valley of West Virginia. Photo: Greenbrier Valley Flood Recovery and Relief via Facebook

[Episcopal News Service] Episcopalians in the Diocese of West Virginia are helping their neighbors as the southeastern part of the state cleans up after last week’s devastating floods killed 23 people and damaged thousands of homes and businesses.

Fifteen of the state’s 23 deaths occurred in Greenbrier County. The two Episcopal churches in the county, St. James’ Episcopal Church in Lewisburg and St. Thomas Episcopal Church in White Sulphur Springs are already responding to the disaster with support from other congregations in the diocese.

Episcopal Relief & Development is providing technical and financial assistance to the Diocese of West Virginia, and the support will enable the diocese to pay for motel rooms for people who are displaced and supply gift cards so that people can buy needed clothes and household items.

Clergy and lay people from all of the Episcopal churches in the Greenbrier Valley have been hard at work in the days since the flooding, according to a June 29 email update sent to congregations from the diocesan offices.

Bishop W. Michie Klusmeyer had said in an earlier email that the valley churches had survived the floods and in some cases were sheltering flood survivors in addition to coordinating relief efforts. “Many are stepping in quickly, but the damage is so widespread that it will take weeks to understand the totality of the lives that have been taken and/or destroyed,” he wrote. “Prayers are deeply desired.”

“White Sulphur Springs has been specifically devastated,” St. Thomas said June 25 on its Facebook page. “St. Thomas was out of the path of the raging waters, which swelled local creeks rapidly after the area received up to 9″ of rainfall on [June 23] … If you would like to help, but are not able to be physically present, please pray.” 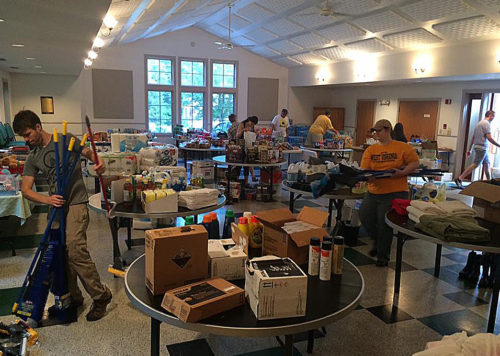 Since June 24 when St. James’ Episcopal Church had its power restored, the church has been another hub of relief efforts. The church had one of the few working telephone lines in the area, according to a June 25 posting on its Facebook page.

In collaboration with the United Way of the Greenbrier Valley, it sent collected goods to five area shelters and plans to continue doing so as more supplies come in. The donated supplies have ranged from baby products and hot dog buns to sweat pants, batteries and bleach. The partnership with United Way and the diocese is headquartered at St. James. Daily contact is being maintained with other facilities and shelters to ascertain the daily needs for their residents and volunteers.

St. James’s parish hall has become a staging area for donations that have poured in. A video from the local United Way group shows the work being done there. 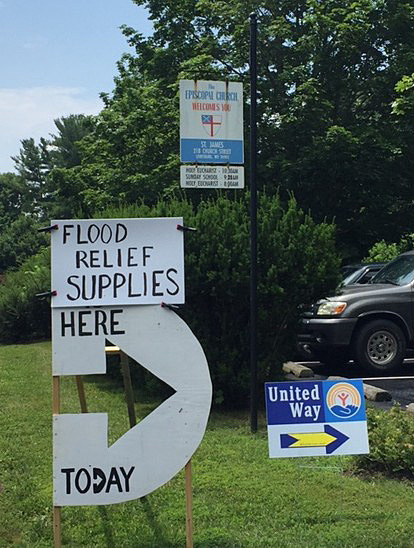 “What a crazy, devastating, unbelievable, inspiring, and long weekend,” says the post that accompanies the video. “Thank you to our volunteers and donors. In the wake of such tragedy, our little piece of West Virginia has shown love, strength, and perseverance.”

Social media has played a big role in connecting people, tracking needs and sharing news, according to the Rev. Josh Saxe, St. James’ priest-in-charge. Caught on his way to set up for a coordinating meeting of nongovernmental organizations that were helping with flood relief, Saxe said June 29 that the collaboration’s “Greenbrier Valley Flood Recovery and Relief” Facebook page has almost 8,000 followers and its post reach is one than 1 million people (meaning 1,000,000 different people have seen at least one of its posts). Nearly 80 percent of those people are viewing the page from mobile devices, he said.

“We post regularly about important information people around the community need to know or have asked about,” Saxe said, including advisories, which businesses are donating services, where to get tetanus shots, and where to donate money or supplies. “Everything we have posted has been fact-checked, and this page has become a resource that people trust.”

Any comment on the page or received through messaging is now responded to in about four minutes, and people are being directed to the proper places for help, he said. The partnership is regularly communicating with and assisting the county emergency management agency, at the agency’s request.

Saxe added that the St. James congregation is considering the long view as well as the community’s immediate needs. One possible way forward, according to Saxe, is to create a nonprofit organization to direct the many financial donations that the church has received toward future needs.