[Episcopal News Service – Manta, Ecuador] The poor, women and children, suffer most in the aftermath of disaster. In Ecuador, where a massive earthquake killed more than 650 people and displaced more than 30,000 in April, in addition to trauma, grief and emotional wounds inflicted, women and children have experienced increased rates of domestic violence, and hunger has led to an increase in gastrointestinal and respiratory illness in children.

This reality left in the earthquake’s aftermath doesn’t make headlines or lend itself to photographs, but vicars serving the Diocese of Ecuador Litoral’s four mission churches here confront it every day in their communities. Moreover, it’s a reality that over a four-day period June 9-12 longtime companions representing four churches in the Diocese of Tennessee learned of firsthand.

During an informal gathering at St. Joseph the Worker mission church, the Rev. José Cantos Delgado, deacon-in-charge, described the situation. The church, which suffered minor structural damage, is located in the 15th of April, a canton where the “poorest of the poor” live and where squatters, common in Latin America, have built bamboo, brick and plywood structures behind the church.

“Ecuador has one of the highest rates of child abuse in South America,” said Cantos, adding that the earthquake and its associated stresses, food insecurity and job losses, have led to an increase in domestic violence, with women trying to protect their children and themselves.

St. Joseph the Worker operates a daycare center for children in the community, where the daily lessons have focused the children’s emotional well-being, rather than learning, since the earthquake.

“The school is the vehicle for helping the children and their mothers, and that’s the most fundamental way of helping,” said Cantos. “It’s important to continue to work with women and children because they are the most affected.”

The 7.8 magnitude earthquake struck just off the central coast on April 16 in what people who lived through it described as a “long, slow wave” that led many to fear a tsunami would follow. In addition to the hundreds who died, more than 12,000 people suffered injuries. And a week later, aftershocks continued to rattle the country and peoples’ nerves. 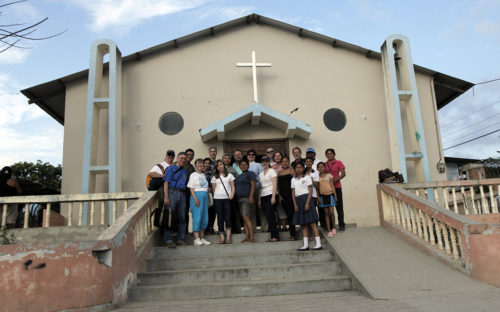 Companions from the Diocese of Tennessee pose along with members of St. James the Apostle in La Pila, a small community a 40-minute drive from Manta. Photo: Lynette Wilson/Episcopal News Service

Ecuador is covered by two dioceses, the Quito-based Diocese of Central Ecuador, and Ecuador Litoral, which stretches from Guayaquil, the country’s largest city and financial capital, north along the coast, an area popular with tourists and expatriates.

The earthquake caused an estimated $4 billion in structural damage, a staggering amount in a country economically beset by falling oil prices and now a drop in tourism as well.

“Nobody was prepared for the earthquake; it was like a movie,” said the Rev. Betty Juarez Villamar, the only priest in the region, who serves both St. Stephen’s Episcopal Church, a short drive from St. Joseph the Worker, and St. Paul’s Episcopal Church near the beach.

In the coastal community of Manta, a 3.5-mile drive north of Guayaquil, damaged buildings are scattered throughout the city and more than 580 already have been razed. A 5-acre commercial district “ground zero” has been cordoned off for demolition. Many people live in makeshift encampments constructed from salvaged materials and others live in tents outside their homes around the area’s perimeter. Some displaced residents live in guarded areas in blue tents provided by the government of China.

The diocese’s first priority to help families achieve a sense of peace and security in the aftermath of the earthquake, said Ecuador Litoral Bishop Alfredo Morante. Beyond that, the diocese intends to help people rebuild their homes and find jobs.

One of ways to help alleviate the pressure and tension on families is to provide people with a space to tell their stories and begin to recover from the trauma the earthquake wrought. 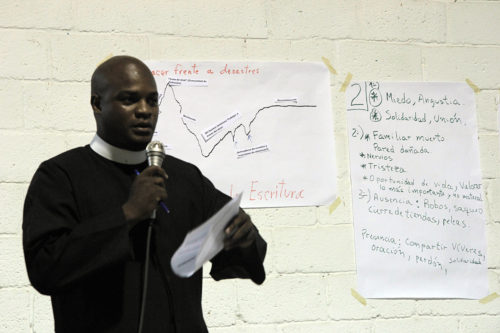 Since 1998, the Tennessee companions have made yearly visits to Ecuador. On the evening of June 11, they facilitated a disaster-response workshop to educate people about the stages of grief and the importance of prioritizing their spiritual and mental health.

In addition to St. Joseph the Worker, the group visited the other three churches to listen to the stories of community members and to express their solidarity and caring.

“Part of our relationship over the last 20 years has been to share our stories; for us from Tennessee it’s important to listen,” said George Kurz, who coordinates the companion relationships and who co-led the workshop alongside Sarena Pettit. “We’ll be going back to Tennessee and sharing your stories. Telling your stories is part of your healing.

“It’s important for all of you to be patient and generous with one another while you continue to tell your stories.” 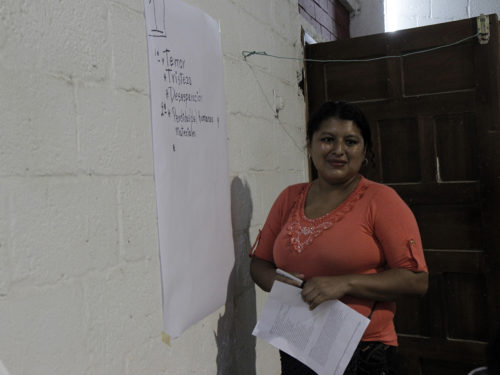 The June 11 workshop was based on an Episcopal Relief & Development resource to address the needs of people who turn to the church for support in the aftermath of a disaster. More than 50 people attended the workshop at St. Joseph the Worker, many coming by bus from St. James the Apostle in La Pila, an area some 40 minutes away.

After learning about the emotional lifecycle of a disaster, participants divided into four smaller groups and had discussions based on scriptural readings – Psalm 6 and Matthew chapters 11-12 – and a series of questions processing grief and the importance of self-care.

As companions, the Tennessee churches keep their Ecuadorian counterparts in their thoughts and pray for them weekly during the Prayers of the People.

“We are with you in spirit and prayer,” said Pettit, a member of St. Joseph of Arimathea in Hendersonville, who also serves as the group’s Spanish-language interpreter, during a visit to St. James the Apostle in La Pila. “Every week we are praying for you in our churches and we are here to help you any way we can.” 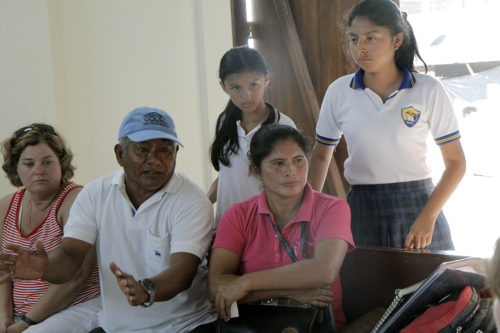 Saulo Cirilo Lucas Muentes talks about the April 16 earthquake. His wife, Miryan Ines Lucas Mero, and the couple’s two daughters, were at a birthday party when the 7.8 magnitude earthquake hit. Anne Ridens, of Church of the Good Shepherd in Brentwood, Tennessee, listens during a visit to St. James the Apostle in La Pila. Photo: Lynette Wilson/Episcopal News Service

During the visit, Miryan Ines Lucas Mero told the story of how she was with one of her daughters at a birthday party while her husband was at another party and her other daughter was at home. Just before the earthquake, the daughter who had stayed home joined her mother and sister. Both daughters were seated at her side two minutes before the earthquake hit. Before anyone felt the quake, the older daughter said it was coming. When she said it a second time, they began to feel the ground move, they dropped their cake and ran outside, where they watched as the building collapsed.

Lucas’s husband, Saulo Cirilo Lucas Muentes, the church’s senior warden, was frantic because he thought one of his daughters was home alone, and his wife was terrified that he had died, if not from injuries but from his high blood pressure.

They walked home in the dark past collapsed buildings. Cell phone service was lost and they couldn’t reach other family members. Many of the people came to the church because they didn’t have any other place to go. When day broke and they were able to see the full extent of the damage and as food and water shortages became evident, things got even worse. “It was chaos,” she said. 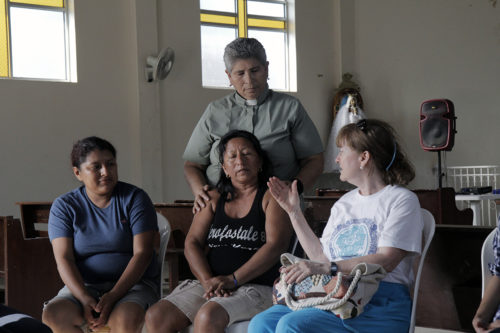 Two other women, Martha Alexandra Palma Mezones and Cecilia Lorena Quijije Gómez, were attending a retreat in Guayaquil and their children were at home when the earthquake hit. Their children survived, but Palma lost her home and now lives with her mother, and Quijije is living on her patio because her home was damaged significantly.

Many people lost homes and are living with other family members crowded under one roof.

The companions from Tennessee had plans to visit their counterparts in Ecuador Litoral before the earthquake hit. Members of St. Philip’s in Nashville, which is seeking a companion church, were to accompany them. Originally, the group of 11 was meant to be twice its size, with some members operating a medical clinic. But the bishop asked that the group focus on a ministry of presence, which for the group led to new insights.

“We have long noticed that women and children were in a disproportionate majority during church services and that women filled most [if not all] of the positions of leadership in many Episcopal churches in Litoral,” said Kurz, following the visit.

He and others in the group were unaware of the high rates of domestic violence in Ecuador, violence that has intensified after earthquake. 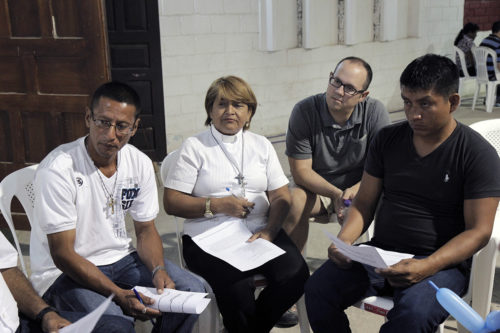 “For families where men had lost jobs due to damaged factories or destroyed businesses, the conditions for abuse and hunger have been exacerbated,” he said. “This is the first time when I have heard a trained person [Cantos] within the church in Litoral address these problems and I was shocked to realize the extent.”

Last year, when Cantos, who works a secular job Monday through Friday in Guayaquil, lived in Manta, he ran a weekly group for children’s mothers. The meetings offered women a space to share their stories, and it gave him an opportunity to teach them about their legal rights. A shelter system does not exist, he said, and many women have no option but to return to abusive partners.

“[Of the 20 who participated] 90 percent of these women were abused and didn’t have any way to deal with it,” said Cantos during the meeting, explaining that they didn’t have the education or the understanding to know where to go to report the abuse. Two of the women took action, he said. He added that the number who seeks help is low because of the deeply entrenched machismo culture bias that leads to pressure, even from their own mothers, to stay with an abusive man.

And with the earthquake, that pressure has increased. It’s something the companions in Tennessee may want to help with.

“While the conditions for other congregations may vary from this one, I now realize that this is a factor that we should consider as part of our relationship in working with churches in Ecuador,” said Kurz, adding that it may be an area in which the companions can assist by providing training and resources for local clergy and lay leaders.

– Lynette Wilson is a reporter and editor for Episcopal News Service.