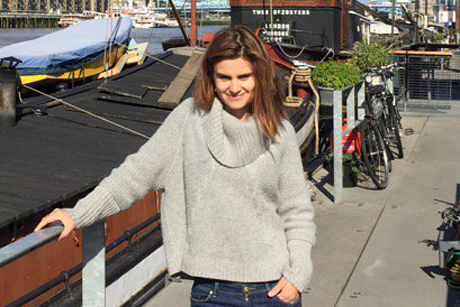 Brendan Cox tweeted this photo of his wife, 41-year-old mother-of-two Jo Cox, the Labour MP for Batley and Spen, after she was fatally shot and stabbed yesterday. Photo: Brendan Cox

[Anglican Communion News Service] Churches throughout West Yorkshire and elsewhere in the UK are hosting vigils and special services following the murder yesterday (Thursday) of Labour MP Jo Cox in her Batley and Spen constituency. The 41-year-old mother of two young children was repeatedly shot and stabbed outside her constituency surgery.

Police said that a man was arrested close to the scene and weapons, including a firearm, have been seized. He remains in police custody.

This afternoon, Anglican Consultative Council member the Revd Rose Hudson-Wilkin, chaplain to the House of Commons – the lower house of the UK Parliament – laid flowers at a make-shift memorial to the MP close to the scene of the shooting. She was in the town to accompanying the British Prime Minister David Cameron, Opposition leader Jeremy Corbyn, and House of Commons Speaker John Bercow as they made a rare united visit to lay flowers and make their own tributes.

During the visit, Mr Corbyn said that the Prime Minister and Speaker had acceded to his request for Parliament – which is currently suspended for next week’s referendum on Britain’s membership of the European Union – to be recalled on Monday so that MPs can pay tributes to their colleagues.

St John’s Church in Cleckheaton, one of the local churches that has remained open for people to pray and reflect following the killing, welcomed “a steady stream” of people throughout this morning as local residents paid tribute to their “much loved MP and local girl”, a spokesman for the Diocese of Leeds said.

“There are a lot of people seeing this murder as an attack on women, and an attempt to silence bright young women and take away their right to be heard,” the Vicar of Cleckheaton, the Revd Brunel James, said. “But what Jo taught us is we should never be afraid, we should never hide away, and we should always fight to be heard whoever or wherever we are.

“Let us learn from this to carry on Jo’s legacy for all the people she loved and who loved her”, he said.

Last night (Thursday), several hundred people, including a number of MPs, packed into St Peter’s Church in Birstall for a vigil led by Bishops Nick Baines and Jonathan Gibbs of Leeds and Huddersfield. The parish priest, the Revd Paul Knight, said the vigil was to remember “everything Jo Cox did for our community.”

Jo Cox was elected to Parliament in last year’s General Election with 43.2 per cent of the vote and a majority of 6,057. She was a vociferous campaigner for human rights around the world, and was particularly concerned with the plight of the people of Syria. She previously worked for the humanitarian aid agency Oxfam; and was held in high esteem by MPs across the political divides.

The motive for the attack is not known; but the attacker is reported to have shouted “put Britain first” as he carried out the attack. There has been increasing concern about the rhetoric being used by campaigners ahead of next week’s referendum on Britain’s continuing membership of the European Union.

Yesterday, before the attack, the bishops of the Church in Wales issued a statement in which they said: “It is a matter of great concern to us that the debate is frequently couched in the emotive language of fear. We note with particular concern that the divisive issue of immigration, with the demonisation of immigrants, is being used in a way that is in danger of overwhelming sensible debate. This ignores the facts that immigration has been of benefit to the nation, and that immigrants still make up only a very small percentage of the population.”

The two lead campaign groups for next week’s referendum have suspended campaigning as a result of the murder; and the Conservative Party have announced that they will not contest the resultant by-election.

On Twitter, the Archbishop of York, John Sentamu, said that he was “Gutted [and] absolutely bewildered by the brutal murder”. And the Archbishop of Canterbury, Justin Welby, posted: “The death of Jo Cox is terrible, most for her family & friends, but also for what the whole country has lost. We pray for those who mourn.”