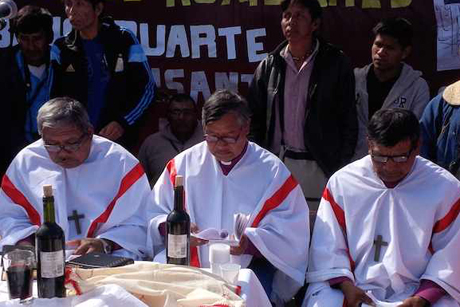 Bishops Cristiano Rojas, Mateo Alto and Urbano Duarte during their consecration as suffragan bishops in the Diocese of North Argentina. Photo: Anglican Journal

The ceremony, held in El Portillo, a small, mostly indigenous town in Argentina’s Chaco region, was attended by more than 1,000 people, Bishop Michael Pollesel, of the Diocese of Uruguay, told the Anglican Journal.

“The town’s population swelled, as people made their way there travelling on a dirt road for some two hours or more,” said Pollesel, who took part in the consecration. “The Indigenous people see these ordinations as a recognition of the importance of Anglican ministry and presence among their peoples.”

There are now, Pollesel says, some 140 Anglican churches in the diocese that are attended mostly by indigenous people. It is mostly because of these churches, he says, that North Argentina has far more churches than any other Anglican diocese in the province. Pollesel was elected bishop of Uruguay in 2011, after having served as general secretary of the Anglican Church of Canada.

The diocese of North Argentina belongs to the Anglican province of South America (formerly known as the Southern Cone), which includes dioceses in Argentina, Bolivia, Chile, Paraguay, Peru and Uruguay.

The three new bishops belong to the Wichi and the Toma, two peoples native to the region.

The event, Pollesel says, took about four hours, and featured four languages – Spanish and three indigenous languages, with music provided by guitars, an accordion and an electric organ. Most people stood for the whole service, he says, since there weren’t enough chairs for the throngs of people who showed up.

It took place a half-century after the first ordination of indigenous Anglicans in Argentina, Drayson says. Until the mid-1960s, bishops in Buenos Aires refused to ordain indigenous spiritual leaders because they “did not consider they would be able to function outside their context,” he says.

This changed when Cyril Tucker became Bishop of Argentina in 1965. Confronted with this situation, Tucker is said to have responded, “Find me a man who can raise his own people spiritually and I will ordain him,” Drayson says. The following year, seven indigenous candidates were ordained as priests in the diocese. In 1975, an indigenous priest, the Rev. Mario Mariño, was ordained suffragan bishop of North Argentina, and served in the position until his death in 2002.

Within the Anglican province of South America, Drayson says, there has also been one indigenous bishop in Chile and [three] in Peru.