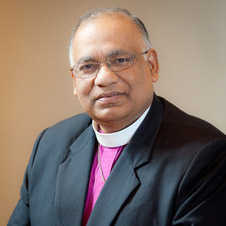 The convention was held at Trinity Cathedral, Easton, Maryland.

Canonically resident clergy of the diocese and lay delegates voted separately. A majority of votes on the same ballot from both the clergy and lay orders was required for election of the new bishop. Marray was elected on the third ballot with 31 clergy votes and 69 lay votes.

Andonian and Mennell withdrew after the second ballot.

Marray, 58 and currently an assistant bishop in the Diocese of Alabama, was bishop of Seychelles, Province of the Indian Ocean, from 2005-2008. He also served as an assistant bishop in the Diocese of East Carolina from 2009-2012.  Prior to being elected bishop, he served a small parish in Florida, and multi-church parishes in his native country, Guyana, and the Bahamas. A more detailed biography is here.

Pending the canonically consent from a majority of the Episcopal Church’s diocesan bishops and a majority of diocesan standing committees, Marray will be installed Oct. 15 during a service at the Todd Performing Arts Center, Chesapeake College, Wye Mills, Maryland, with Presiding Bishop Michael Bruce Curry.

The Rt. Rev. Henry Nutt Parsley Jr., the former bishop of Alabama who became bishop provisional of Easton in 2014, will be retiring.

The Diocese of Easton dates to 1868 and comprises 38 worshipping communities of nearly 10,000 members, served by 70 clergy. It encompasses the entire Eastern Shore of Maryland comprised of nine counties, from the Chesapeake Bay to Delaware and from Pennsylvania to Virginia.