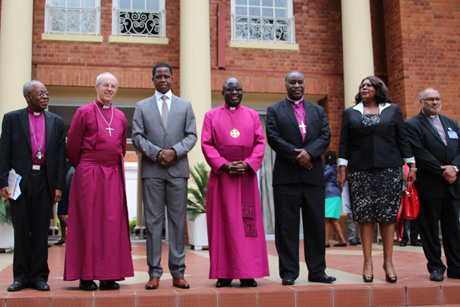 [Anglican Communion News Service] Bishop of Eastern Zambia William Mchombo, has expressed his “great concern” about the rise in political violence ahead of the country’s tripartite general election which is due to take place on 11 August. Britain and the U.S. have warned their citizens to be careful of political violence when visiting the country, and now the head of the tourism body says that visitor numbers are beginning to fall.

Historically, Zambia has not been plagued by the violence that has hit other countries in the region, but this year’s general election has sparked an upsurge in violent incidents by some of the cadres – the activist supporter groups of the political parties. Last month the Cathedral of the Holy Cross hosted an ecumenical indaba to which all the political parties attended – including Zambian President Edgar Lungu – and an agreement was reached over a number of issues including moderating the political rhetoric and curbing the wearing of military style clothing by campaigners.

But the violence has continued, and now Bishop William has spoken out, saying: “the rising political violence despite declarations made by all the political leaders to avoid such is of great concern. It still remains incumbent upon all the leaders of various political parties to restrain their utterances and those of their followers.

“The speeches should be devoid of provocative and malicious language. We urge the party leaders to engage the Electorate with developmental ideas and rein in their followers and condemn any acts of violence and unpalatable language.”

Alex Munthali, chair of the Tourism Council of Zambia, said that the violence is hitting tourism numbers in the country – impacting an industry that is key to the nation’s economic development. “This is our peak period and if we are to economically develop by placing tourism as one of the three pillars of economic development, violence should not be entertained,” he said in an interview with The Post newspaper. “We have started to see a reduction in tourist arrivals and some cancellations due to political violence.”

He continued: “All political players need to understand that this is not the first time Zambia is going to the polls. We have seen change of governments before and the August elections must not be any different. We need the peace that we have enjoyed before, there is no need for violence.”

Bishop William said that “Politics is about competing ideas and yet, unfortunately, it is slowly becoming the new norm for political parties to engage in physical confrontation which is totally uncalled for. Engaging in physical confrontation denotes lack of critical thinking and the impact of the consequences of such actions on the security and stability of the nation.”

He urged the citizens of Zambia to study the political parties manifesto documents, saying that it was they – the voters – who were “the major stakeholders in the whole electoral process” rather than the candidates and political parties.

“The way the electorate cast their votes will determine the type of leadership and government that will get into office and the kind of economic and social development, if any, that will come from such leadership,” he said. “It is for this reason that extra care should be taken in paying particular attention on what the competing parties have to say about issues such as the economy in relation to the high cost of living, inflation and the rising national debt that is affecting all of us, and subsequently the future generation.

“The electorate should not be short changed in discussions on youth unemployment and neither should they be given cosmetic utterances on improving the agricultural sector or the electoral catch phrase of diversification. We urge the electorate to demand tangible solutions to issues affecting the nation and also the means that such solutions will be arrived at by all the political players. The power of the electorate lies in casting the vote wisely.”

He urged voters to demand a “strong commitment to the fight against corruption from all the political parties,” saying that it hampered the economic and social development of the country and “negates any efforts to put a dent in the poverty levels of our nation.”

And he said that attacks on journalists should stop: “The media . . . has a big role to play,” he said. “It will not help to attack journalists in the course of their duties. It is not always that media houses will publish news that supports a particular stand point of a given political party.

“But it is important sometimes to learn from the criticism offered. The electorate however expect moral and ethical reporting in a fair and balanced manner. After all, journalism is about unearthing truth, not peddling fear and paranoia.”

He added: “let the political parties market their messages peacefully. Let the electorate be perceptive and not emotional. Elections and political parties will come and go, but Zambia as our motherland shall always be there. Let us keep it intact and an oasis of peace for ourselves and for the future generation.”

Last month, Archbishop of Canterbury Justin Welby, met the Zambian President Edgar Lungu during his visit to Lusaka for the Anglican Consultative Council meeting. The rise in political tensions and the cathedral-hosted political indaba was amongst the items discussed.