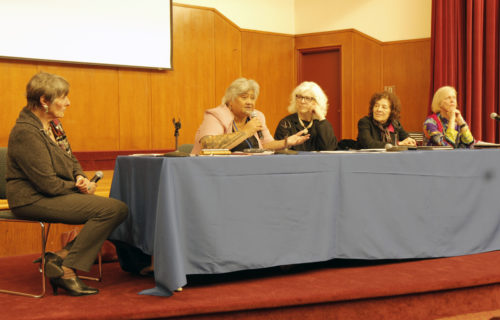 [Episcopal News Service] By empowering women and girls from the ground up, it is possible to change entire communities: to lower poverty and domestic violence rates and to ensure that girls receive an education. It is even possible to change men.

“I believe that economic development will never be a reality unless it reaches women and girls,” said Dana Dankin, founder of Women’s Trust, an organization operating in Ghana that empowers women and girls through microenterprise, education and access to healthcare, during a March 16 panel on sustainable development.

Through working with women, building relationships “under the radar” out of sight of corruption, Dankin continued, it is possible to provide women and girls with the resources and a framework to build their own path out of poverty.

Dankin shared her more than 20 years’ experience working in Ghana during a United Nations Commission on the Status of Women parallel event focused on “Sustainable Development: The Power Tool for Women and Girls.” Panelists presented their contributions to sustainable development, specifically describing how it contributes to the economic empowerment of women and girls.

In addition to serving as a platform to share stories about what works in the field, the panel was intended to bring together people, often working in isolation to achieve similar goals, into a network, said moderator Rosemary Williams, founder and director of Women’s Perspective, a Connecticut-based nonprofit organization that provides educational programs focused on financial empowerment to women and girls worldwide.

Hosted by Women’s Perspective and Anglican Women’s Empowerment, the event was held at the Salvation Army Auditorium, 10 blocks north of United Nations headquarters where official UNCSW discussions are taking place. Williams, a founding member of Anglican Women’s Empowerment and a member of St. Paul’s Episcopal Church in Fairfield, Connecticut, is a former banker and longtime women’s economic empowerment advocate wrote a training manual on the subject. Each attendee received a copy.

During a question-and-answer session following the initial introductions and a meditation exercise, a woman asked Dankin what she meant earlier in regard to changing men. She clarified her earlier comment by saying that as women begin to earn money and provide support for their families, it takes the pressure off men, changing family and community dynamics. In some cases, she said, men have become partners in their wife’s entrepreneurial activities.

The Rev. Paula Nesbitt, former chair of the Episcopal Church’s Executive Council Committee on the Status of Women, is an academic researcher studying women and work, particularly women priests in the Episcopal and Unitarian Universalist traditions. She has also on worked on issues such as maternal health, violence against women and human trafficking, as well as empowerment and she’s found that three tools are necessary for transformation: education, the end of exploitation and empowerment through women’s networks.

She recommended that attendees read an article published March 12 in The Economist, which talked about “feminist economics,” and paints an accurate picture of women’s experiences over the last 30 years, she said.

Another panelist, Caroline Herewini, chief executive of the Te Whare Tiaki Wahine Refuge, talked about what it has been like for New Zealand’s indigenous peoples, the Maori. Before New Zealand was sighted by Dutch explorer Abel Tasman and fell under western influences, indigenous people had created a sustainable society, had sailing ships and had established trade with Australia; moreover, they’d developed a culture where “women were considered sacred and children gifts from God,” but within 100 years of colonization, indigenous people had begun to lose their culture and way of life.

Ann Smith, the final panelist to speak, talked about her 30 years of experience working on women’s empowerment and global gender parity, and more recently in developing an indigenous women’s pathways program to address internalized institutional racism and sexism.

In developing the program, she said, rather than create a timeline, they created a circle, she said.

“In a circle, everyone is equally valued,” said Smith.

Women from across the Episcopal Church and throughout the Anglican Communion representing more than 20 countries are gathered in New York for the 60th session of the UNCSW March 14-­­­­­­­24.

More ENS coverage of Anglican and Episcopal women’s participation in the UNCSW is here.