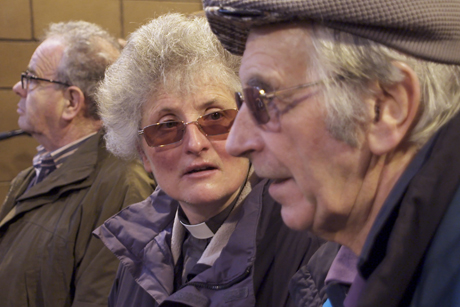 The Revd Canon Eileen Davies talks to farmers in an election video produced by the Churches in Wales. Photo: Church in Wales

[Anglican Communion News Service] Over recent years, churches in the UK have increasingly hosted husting events ahead of local and general elections – bringing together political candidates in front of an audience of electors to be grilled on the issues of the day. But the churches of Wales have now gone one step further, and produced a set of videos in which party representatives are interviewed by church representatives.

The videos have been produced by Churches Together in Wales (Cytûn), an ecumenical body that includes the Church in Wales.

Wales has a devolved legislative body as part of the United Kingdom – the Welsh Assembly. And in the videos, representatives from the Conservative, Labour, Liberal Democrat and Plaid Cymru parties – the four main parties currently represented in the National Assembly – are questioned about how they would respond to homelessness in urban areas and poverty in rural areas.

They are quizzed by a vicar of four rural parishes who fears that her rural neighbourhood in Ceredigion is “closing down” and a Salvation Army housing support worker who struggles to find shelter for homeless people in Cardiff.

The films were launched at the National Assembly for Wales this week as part a package of online resources put together by to help churches engage with Assembly elections due to take place on 5 May 5. The dedicated website also includes guidance and advice for organising hustings, a register for events they are organising and briefing papers on key policy areas.

In the films, produced by the Salvation Army’s video production unit, the Revd Canon Eileen Davies, farmer and rural life adviser for St Davids Diocese, based in Ceredigion, and Laura Major, a support worker at the Salvation Army’s Ty Gobaith Lifehouse Centre for homeless people in Cardiff, are followed as they describe the issues they face in their day-to-day work.

Eileen is filmed engaging with farmers at the Carmarthen livestock market and touring her parishes near Lampeter. She explains how the fall in milk and lamb prices, TB and delay of the Basic Payment Scheme have impacted on farmers, while the lack of broadband, poor public transport and the closure of schools, post offices and shops have helped drive young people out of rural communities. She also describes a counselling and advice service to support farmers set up by local churches last year, called Tir Dewi.

Laura is seen at work at the Ty Gobaith – “Hope House” – centre, in Cardiff, helping to resettle homeless people and give them the life skills they need. She is also filmed on the city streets, looking for accommodation. Her concerns are a lack of affordable housing for homeless people, the stigma they face and the effect of benefit losses when they start work.

“There is a massive Catch-22 situation for homeless people,” says Laura. “People who want to work are penalised financially when they start to work as their benefits are withdrawn. For a lot of people their wages can’t cover that amount. It causes a lot of stress and some people suffer mental health issues after the whole process – they feel very depressed as there is something in the way of helping them lead a normal life.

“Trying to find accommodation for people to move into in Cardiff is very difficult. There are a lot of properties available but not to people who are homeless, due to the social stigma that comes with being homeless.

“It is so wrong that these people are judged just because they are not at their finest hour and living in a homeless hostel.”

“Churches have a long tradition of encouraging democratic engagement by their members and by the wider parish,” Cytûn’s National Assembly policy officer, Gethin Rhys, said. “This is the first time we have made election films and we hope they will act as a discussion starter in groups or even in worship. We are very grateful to Eileen and Laura for raising two very real and important issues for Wales and giving each party a chance to say how they would address them.”

The Archbishop of Wales, Dr Barry Morgan, said: “I hope this film inspires people to think hard about the issues raised and consider carefully the responses of the four parties so that they can make an informed decision on how to vote on 5 May.

“Our right to vote is not something we should take for granted. It was a hard-won right, and one which millions of people in the world still don’t enjoy. By voting and being active in politics we exercise our power to change society – that is quite a responsibility for all of us.”

The Salvation Army’s public affairs officer for Wales, Major David Emery, said: “We’re delighted to have played a role in this joint project with all the churches in Wales. Hopefully the films will help engage people on the many issues affecting communities around the country.

“I’d like to say a big thank you to our video production unit for their incredible support on such an important and worthwhile project.”