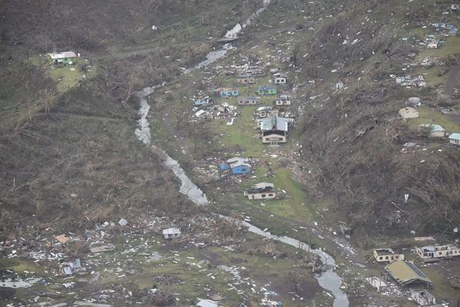 [Anglican Alliance] The largest storm ever recorded in the region struck the islands of Fiji over the weekend, after causing widespread damage in Tonga. The Anglican Church in Aotearoa, New Zealand and Polynesia is already working to assess the damage and begin its response.

Cyclone Winston was described as the strongest recorded tropical storm in Fiji’s history, reaching category five storm level, with wind gusts up to 325km per hour and wave surges of up to 12m high.

The damage is widespread but, with communications down, the full impact of the storm is not yet known. Media reports suggest up to 20 people have been killed and dozens more injured in the storm, as buildings collapsed and debris was thrown by the wind.

Speaking with the Anglican Alliance, the Vicar General of the Diocese of Fiji, the Revd Orisi Vuki said: “The situation is very serious. Power is off in many places and so it is very difficult to contact our parishes and schools.”

The priorities now are to make sure that people on the islands are safe and receive immediate assistance: food, water, shelter and medical care.

The roads are reported to be bad. Water supplies have been affected as well as food crops, Orisi Vuki said.

Many of the communities affected are on outer islands. With power and communication lines down, it currently difficult to get information.

Fiji’s National Disaster Management Office reports that people have been evacuated from their homes and are staying in 32 emergency shelters across the islands. Some churches have been used shelters.

The government curfew in place over the weekend was lifted on Monday morning, but schools will remain closed for the week, while the clean-up process begins.

The government has declared a 30-day state of emergency in response to the natural disaster.

Fiji’s prime minister, Frank Bainimarama, said on Saturday, as the cyclone was approaching, “As a nation we are facing an ordeal of the most grievous kind. We must stick together as a people and look after each other.”

The Anglican Missions Board in the Province of Aotearoa, New Zealand and Polynesia is working with the Diocese in Fiji to respond to the situation and has launched an emergency appeal.

Anglican Missions Board states: “The Diocese of Polynesia would greatly appreciate any support that we are able to provide.”

Meanwhile, expressing solidarity from the region, Julianne Stuart, Programs Director at ABM in Australia, wrote: “ABM has asked for prayers for the people of Fiji who have experienced loss of loved ones, injury, loss of homes and food gardens, and for Archbishop Halapua and the Anglican Church of Polynesia in Fiji. We are currently trying to get in touch with the Church in Fiji through their Missions Board, AMB in New Zealand.”

The Anglican Alliance asked the Revd Orisi Vuki to say how the Anglican Communion could stand together with the Church and people in Polynesia.

“Please pray for God’s intervention on Fiji and Tonga,” he said. “We need your prayers and support at this difficult time.”