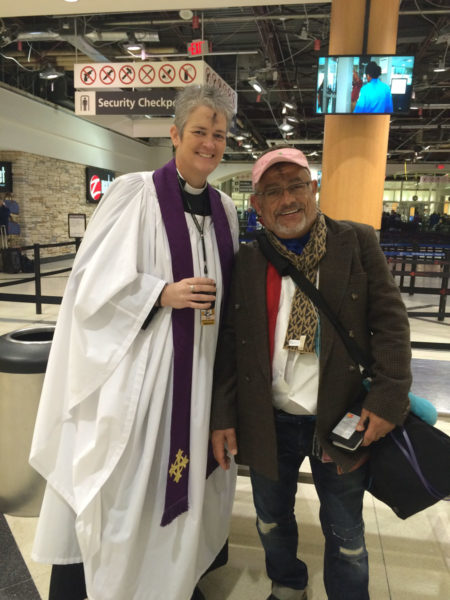 The Rev. Donna S. Mote, Episcopal chaplain at the Atlanta Hartsfield-Jackson International Airport, will offer “Ashes on the Fly” to domestic and international travelers throughout the day on Ash Wednesday. Photo: Courtesy of Donna S. Mote

[Episcopal News Service] Increasingly, there is “Ashes to Go,” ‘Smudge and Run,” “Drive-through Ashes,” “Ashes on the Fly,” and now, “Lent in a Bag,” as all sorts of churches — Episcopal, Lutheran, Methodist — are moving the centuries-old Ash Wednesday observance beyond church walls.

The Rev. Donna S. Mote, Episcopal chaplain at the Atlanta Hartsfield-Jackson International Airport, says she will offer “Ashes on the Fly” to domestic and international travelers throughout the day on Ash Wednesday.

If previous years are any indicator, she expects to impose ashes on hundreds of foreheads for people of a variety of faiths, nationalities and beliefs. She has described some of her encounters on Facebook.

Mote says she takes the ashes into public spaces because reminders of mortality, humility and healing belong where the people are, and make for powerful connections even beyond the context of a formal liturgy.

Like the young woman “last year who asked can you tell me how to explain Lent to people who don’t observe it,” Mote said.

Or an airport employee who told Mote she wanted ashes but had never had them before and wasn’t sure what it meant. “What do you think it means?” Mote asked. Her reply: “’I think it means I want to get my act together, but I’m going to need some help.’ I said, “I think that’s what it means, too,’” Mote said.

But most who approach the cassock-clad Mote “don’t say anything at all. They just come up and bow their heads, including those whose first language is not English. It’s very powerful. You don’t have to speak the same language for an important sacred event to transpire.”

The Rev. Harry Jenkins, rector of Christ Episcopal Church in Slidell, Louisiana, plans to offer ashes, prayers and “Lent in a Bag” to drive-through worshippers.

Included in the brown paper bag is: a copy of Episcopal Relief & Development’s 2016 Lenten Meditations, sand, a rock, a human figure, a candle and a cross, said Jenkins.

“With each of the items there’s a question or a slight description for them to think about what it means,” Jenkins said. “Basically, the sand is to reflect on Jesus going into the wilderness. The rock could be a couple of things—when Jesus was invited to transform stone into bread and about the hunger in the world and that we might pray for those who are hungry.

“There’s a human figure to remind us that we say Jesus is fully human but basically he understands us from inside our skin. He knows from experience we’re each capable of great things. They might reflect on where Christ is in our life during Lent.”

The candle is for meditation purposes and as a dual reminder that Jesus is the light of the world, and not to hide your light under a bushel. The question would be, “so where do you shine with your light?”

“And then the cross is, how do we follow Christ ourselves? What crosses do we bear? We remember to take up our cross daily and follow Jesus,” he said.

The bag also includes a Lenten service schedule and, for a church that averages about 70 for regular Sunday services, the drive-through drew 300 last year “most of who are not members of our church,” Jenkins added.

In many ways, it “meets the needs of people with apprehensions about going to church. Maybe they have had bad experiences and don’t want to go into the building. We feel like it’s something we can do and we really love it.”

The church also offers a noon and 7 p.m. indoor service and Jenkins said the church started “Lent in a Bag” last year as an added takeaway.

“We have had people start coming to the church as a result of Ashes to Go. Not huge numbers, but some have joined. It’s meaningful for participants, for those who come to get ashes, members of the church who help. It adds to our Lenten experience,” he said.

In Tulsa, Oklahoma, the Rev. Kristina Maulden, 49, said this will be her second year imposing ashes on foreheads underneath Trinity Episcopal Church’s carport.

Last year Maulden, the associate rector, stood outside from 11 a.m. to 1 p.m. and prayed with about 60 people “who were either disabled or were bringing their spouse who couldn’t get in the church. There were people who hadn’t been to church in a long time and this was an easy avenue to get back to church.

“And we had people who couldn’t make it to the service, who couldn’t find a parking spot,” she said, of the downtown church which has an average Sunday attendance of about 500.  “It amazed me, these little moments of reaching into somebody’s car and giving them the ashes … was like this little thin space, a holy moment where we were pausing in our day and reminding ourselves of our mortality. It is so rare that we actually touch somebody like that on a daily basis. There were people who, after they received their ashes, were in tears as they drove away.”

The whole point, she said, is to bring church to people, “to go where people are, no matter what state they’re in and say the church is here for you, too.”

Although some of her congregation understands the effort, “others think it’s a bit gimmicky,” she said. “It’s hard to move beyond that unless you’ve actually been in the car when something like this is happening. I just hope people will give it the benefit of the doubt because there is grace here.”

In Michigan, dozens of Protestant and Episcopal churches are offering both “Ashes to Go” and “Drive Through Ashes” including for a fourth year, said the Rev. June Marshall Smith of Novi United Methodist Church.

She felt compelled to offer ashes outdoors after trying to find a service herself a few years ago. “Nobody had a morning worship service. I thought, what’s the purpose of me going to worship at 7 p.m. if I’m just going to go to bed at 9 p.m. I want to wear the ashes all day.”

The service is “a labor of love” and she has fun with it.

“One year, it was subzero temperatures and I was asking myself why I’m doing this. Then somebody’d go through the line and they’d be crying because it meant so much to them.”

Another year, she created a sign: “‘Get your ashes in here,’” she said, chuckling. Smith stands under a portico near the church building and also offers, a brochure with prayers and a reminder to mobile penitents that a way to share their faith is to tell others about the smudges on their forehead.

There is repeat traffic, she said, citing wheelchair vans, senior group vans and also a woman who drove 90 miles for ashes because she wouldn’t have been able to receive them at any other time during the day.

“One man is paralyzed from the waist down and every year, he’s back here,” Smith said. And although she is expecting heavy snows and cold she plans to be prepared again this Feb. 10, by wearing wool socks, leather-soled boots, standing on a carpet and moving a lot in order to stay warm.

She also plans to hold three indoor services, at 6:30 a.m., 7 a.m. and 7 p.m. “We have a good time, it is a wonderful thing.  I would hope churches would give it a try. When they see the impact it has on people’s hearts, I don’t think they’d ever turn back and not do it again.”

The Rev. Aaron Layne, 36, admitted to initially being “on the fence about, are we catering to a fast-paced society who increasingly doesn’t have time for God? Are we making it too easy, you know, to say yeah, I’ve done my religious whatever today and I can walk around with a smudge on my forehead and it means nothing.”

But after 76 cars showed up, including one with a Catholic father whose son had stage IV cancer and couldn’t risk infection by being in public, Layne was convinced.

Another woman said she came because her local church’s service was at 7 p.m. “and that’s my child’s bedtime. The church doesn’t have anything for me to go to. I thought that was really neat, meeting people where they are and that’s why we’re going to continue to do it.”

“For me it’s the adage, the church has left the building. If we truly affirm the fact that we are the church and the church is the people, then I guess it shouldn’t really matter where we conduct our services. With all those justifications and the fact that we sincerely saw Christ the last time we did it I just can’t wait to see how Christ shows up this time.”

But at St. Francis of the Islands Episcopal Church in Savannah, Georgia, the Rev. Lauren Flowers Byrd said that although the church participated last year, they decided to take this year off.

“I’m one of those people that thinks you have to stop for your mortality, not do a drive-through sort of thing,” Byrd told ENS. “That’s sort of the thing to me, to pause, take time to stop and dwell in it for a while.

“It’s like you’re dressed in time, mortal time, when you put the ashes on your head
Absent that kind of grace I can see where the church is out in the street, to come to people to see where the mortal lives actually are lived.”