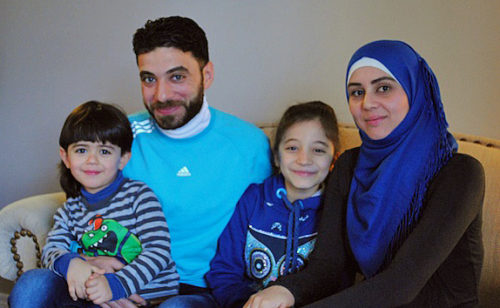 [Anglican Journal — Port Colborne, Ontario] On New Year’s Day, a family of refugees from Syria began the last leg of a journey that had lasted almost three years and brought them thousands of kilometres from home.

As they walked toward the car belonging to Canon Robert Hurkmans, rector of St. James and St. Brendan, the Anglican church that had sponsored them, Bilal and Hiba* watched as their children, eight-year-old Jana and four-year-old Fares, gazed with delight at the fat snowflakes falling from the sky.

A week later, seated in their freshly painted apartment, Bilal and Hiba served tea while Jana and Fares chased each other around the spacious living room overlooking their quiet residential street.

Bilal and Hiba were warm and energetic in their welcome, and when one of them couldn’t find quite the right word to express themselves in English, they would laugh merrily at their own limitations. With the help of interpreter Sima Mahli, they spoke to the Anglican Journal about the long journey that brought them from Syria to this city on Lake Erie, in the Niagara region of southern Ontario.

In 2013, the Syrian civil war had already been raging for two years, and Bilal and Hiba—Muslims from the city of Hama—were in constant fear for their lives.  Hama was controlled by Bashar al-Assad’s government troops, but was frequently under attack from rebel forces.

Bilal had a job running a convenience store, but worried that “someone would come into their home and take them” or that an explosion would kill members of his family. They decided to flee to nearby Lebanon, and after taking a long, roundabout journey by car to avoid the chaotic and dangerous main highway, they arrived in the port city of Tripoli.

But while Lebanon gave them shelter from the immediate dangers of the war, it meant starting a new life. Since the beginning of the conflict, over a million Syrians have taken refuge in the small Mediterranean country, which is still trying to recover from its own violent sectarian past, and jobs and shelter are scarce. Bilal was lucky enough to find work as a chef, but it meant pulling 13-hour days for pay that amounted to only about $400 a month.

Bilal and Hiba often struggled to make ends meet, and paying rent meant they were not always able to afford food; medication for the children when they fell ill was usually beyond their means. Fortunately, they were not entirely alone. Bilal’s brother, Abdul-Raman, had also fled to Tripoli with his wife and five children, and it was through him that Bilal and his family would ultimately escape to safety in Canada.

Donna Kalailieff, who has been co-ordinating the St. James and St. Brendan refugee sponsorship group since September, said they had originally planned on sponsoring only one family—that of Bilal’s brother. But after Abdul-Raman explained to Kalailieff over the phone that he would not feel right leaving Bilal and Hiba and their children behind, she spoke to Hurkmans about the possibility of sponsoring both families. His answer? “Absolutely.”

A year ago, Kalailieff or anyone at St. James and St. Brendan could not have imagined that 2016 would begin with such a welcome.

The idea to sponsor a refugee family arose in spring, after Hurkmans learned that the diocese had decided to celebrate its 140th anniversary by sponsoring 50 refugees. He had been preaching a series of sermons on the biblical responsibility for those who have wealth to also be “rich in good deeds,” and the message of sacrificial giving and the call to raise money for refugee sponsorship struck a chord in the congregation.

Within four weeks, the congregation raised $8,000 more than its initial goal of $25,000, and donations were still coming in.

Kalailieff, who retired last November after working as a nurse and project-manager for the ministry of health and long-term care, said members of the congregation have been eager to donate their talents as well as their money to help the newcomers. Two English as a Second Language teachers at St. James and St. Brendan have already stepped forward and offered to give private lessons, while a retired school teacher in the congregation has offered to help Hiba and Bilal find a school for Jana and Fares.

Ted Kalailieff, Donna’s husband, who was involved in getting the apartment ready and furnished for the family’s arrival, said the wider community has also pitched in—two brand-new bunk beds were donated by the proprietor of a local laundromat, who came to Canada as a refugee from Uganda in the 1970s.

When asked whether or not he has any concerns about the hospitable zeal burning out, Hurkmans said that while it is still “early days,” he isn’t that worried. “I think there’s a lot of excitement in the community.”

The Rev. Bill Mous, Niagara’s director of justice, community and global ministries, agreed, noting that finding people to help the refugees once they are in the country usually isn’t a problem.

“I’ve never seen a refugee sponsorship group be content with submitting the application and losing enthusiasm,” he said. “The transformation and the excitement begin when the family arrives, and that commitment is just redoubled if not expanded infinitely…the chapter that begins upon arrival in Canada is the chapter sponsors are most excited about.”

Given the spotlight on refugees in autumn 2015, the diocese of Niagara’s decision to focus on refugees for its anniversary has proven fortuitous. Mous explained that while the diocese has generally done a few sponsorships every year, the push to bring in 50 refugees has been met with “a huge level of interest.” Over 25 applications have currently been submitted, and a further six are almost ready for submission. Mous said he expects the diocese will surpass its goal by “some significant amount.”

Port Colborne has played an important role in this—after Bilal’s brother and his family arrive later this month, the community will be hosting 11 Syrians.

While Bilal’s brother was supposed to have arrived first, he and his family were held up in Lebanon by the birth of a child. After being cautioned against traveling before the infant reaches two months, they decided that Bilal and Hiba should lead the way.

Fortunately, Hurkmans said, they were able to rent two apartments in adjacent buildings, so they will be reunited as neighbours in their new country.

In the meantime, Bilal and Hiba are busy settling into their new life in Canada. They have already been introduced to the local community health care centre, and are looking into enrolling Jana and Fares at a nearby elementary school. While Bilal hopes to eventually return to the kind of work he did in Hama, learning English will be the next priority. And after so many years of exhausting work and emotional uncertainty, he is first taking a much-needed break to recuperate.

Speaking through the interpreter, Bilal and Hiba said their dreams for their new life in Canada are simple.

“I want my children to have bright futures, and I feel that they have that opportunity now,” said Hiba. “Just to be healthy, just to be happy and safe and not to be afraid.”

* The last names of the families of Bilal and Hiba, and Abdul-Raman, have requested that their last names be withheld to protect family in Syria.