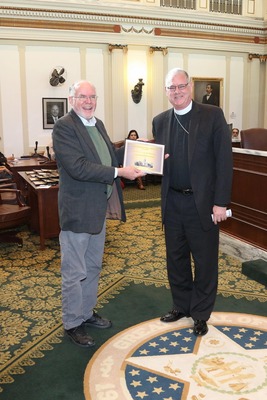 [Episcopal Diocese of Oklahoma] The Rt. Rev. Edward J. Konieczny, bishop of the Episcopal Diocese of Oklahoma, was recently recognized by the Oklahoma Universal Human Rights Alliance for his outstanding human rights achievement. The mission of the Oklahoma Universal Rights Alliance is to be, “…a guardian of liberty, working daily in courts, legislatures and communities to defend and preserve the individual rights and liberties that the constitution and laws of the United States guarantees everyone in this country.”

Konieczny was honored and recognized for his dedication and service, striving to ensure that all people are honored equally as children of God, and are afforded the same respect, dignity and treatment. On this occasion, Konieczny was honored for his support of the Latino community, specifically Santa Maria Virgen Episcopal Church in Oklahoma City. 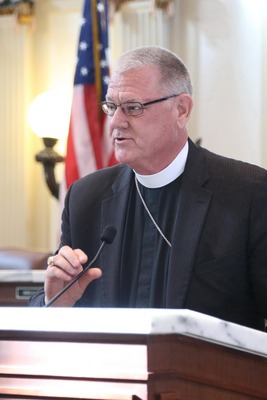 Through Konieczny’s leadership and commitment to this mission, numerous congregations in the Episcopal Diocese of Oklahoma have developed or strengthened programs, ministries and institutions to serve their communities. Whether coordinating and operating after-school care, teaching classes in English as a Second Language, serving as a Red Cross Partner Shelter or Red Cross Resource Center, or preparing and serving meals for the homeless, congregations in the Episcopal Diocese of Oklahoma are encouraged and expected to serve not just those in their congregations, but those in their wider communities.

After receiving his award, Konieczny spoke briefly on the importance of honoring the dignity of all people, ensuring that all are allowed the same rights, responsibilities and privileges as children of God. He highlighted a few of the programs in the Episcopal Diocese of Oklahoma that strive to uphold these truths in their everyday ministry and mission in their communities. Concluding, Konieczny reiterated his commitment and dedication to this mission of equality, dignity and respect for all.